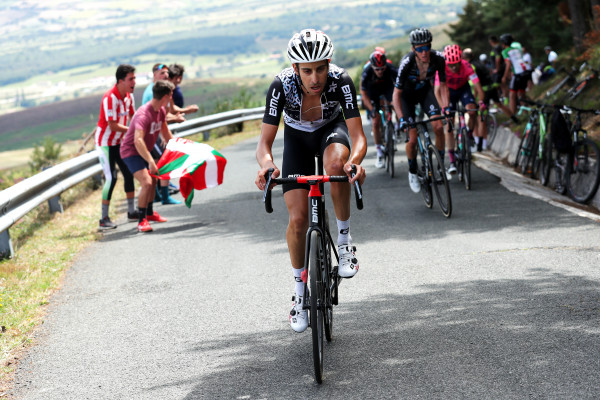 Team Qhubeka NextHash (www.TeamQhubeka.com) has selected its team for the final grand tour of the season, La Vuelta a Espana. The Spanish grand tour will get underway on Saturday 14 August, from Padron, and will cover over 3400km before finishing in Santiago di Compostela, on Sunday 5 September.

Team Qhubeka NextHash was dealt a tough blow last week as our intended Vuelta a Espana race leader, Domenico Pozzovivo crashed at the Vuelta a Burgos and fractured his knee. Emil Vinjebo also crashed at the same race, fracturing his collarbone, forcing our team to make two late replacements to our La Vuelta lineup.

Fabio Aru and Sergio Henao will now share responsibility in leading Team Qhubeka NextHash at La Vuelta a Espana. Aru has shown an impressive return to form in recent weeks, and as a previous winner of the Vuelta a Espana, we are proud to have the Sardinian lead our team at La Vuelta.

Henao makes a return to racing after a strong showing at the Tour de France this year, where he infiltrated numerous mountain stage breakaways and was set to ride into the top 20 overall before fracturing his arm in a crash, which slowed the Colombian climber though he did complete the race in Paris.

With Aru and Henao targeting the mountain stages, Reinardt Janse van Rensburg will be our man for the sprint stages. With three top-10 placings in sprints at last year's edition of the race, the South African will be hoping to edge closer to the top of the results sheet with numerous sprint opportunities at this year's edition of La Vuelta.

Dimitri Claeys and Dylan Sunderland, the two late replacement riders, will both be starting their first ever La Vuelta's although the duo do have grand tour experience at the Tour de France and Giro d'Italia, respectively. Their strength and 'diesel engine' characteristics will be key in supporting roles but also on stages for the opportunists.

Bert-Jan Lindeman and Sander Armee, both two former La Vuelta stage winners, will be leaned upon throughout the race as their experience and selfless team support will be invaluable in every race scenario.

Finally, it is a great pleasure for our team to have Connor Brown starting his debut grand tour. A graduate from our continental feeder team last season, the 23-year-old who has dual South African and Kiwi citizenship completes our lineup for La Vuelta a Espana.

Continuing with our team's theme of getting fans, partners and supporters to announce our team lineup's this year, for the Vuelta a Espana, our u23 Qhubeka continental feeder team riders have revealed our La Vuelta roster with a short video clip (https://bit.ly/3iEfLwi). We look forward to seeing these future stars at the start of La Vuelta one day too.

Fabio Aru
This will be my 6th time at Vuelta a Espana and I have really good memories here. My first Vuelta was in 2014 and I won two stages and finished in top five GC. I was fighting with great champions like Contador, Froome, Purito and Valverde, and that was a great experience for me. In 2015 I won the Vuelta and this was amazing, it really changed my life.

As a country, I really love Spain. I love the passion the people from Spain have for cycling. I think they also love me, my characteristics as a rider and my way of racing. When I have the legs I always try to attack and I think they really appreciate this way of racing. The parcour in general, all the stages and big climbs in Spain I always enjoy a lot.

So I can't wait to be back, at a grand tour again, because as we know the last three years have been really hard for me. This year, I have had a new start with a new team, which has a great Ubuntu spirit which I am part of, and new goals. This has allowed me to get that good feeling back on the bike, from GP Lugano until Burgos, which I am very happy about.

I will give my 100% at La Vuelta, actually even more than 100% for this team. We were unfortunate to lose two very strong riders before Vuelta, Pozzovivo and Vinjebo, in crashes at Vuelta Burgos. So as a team we will also be racing for them every day.

Reinardt Janse van Rensburg
We are looking forward to getting the Vuelta a Espana started. A few of us have really focused our season around the Vuelta, and prepared well to be in top shape for the Vuelta. We had a good showing at the Vuelta a Burgos, our last preparation race, with some very good results, despite losing some guys to crashes.

We look forward to building on the momentum of Burgos and hope to make our supporters proud during La Vuelta.

Connor Brown
I was always one of those kids who was completely obsessed with cycling, whenever there was a grand tour on I was glued to the TV. Now to be racing one is an absolute dream come true! Maybe there will be a kid watching just as I used to, and they will be inspired to ride because of it. That is a cool thought. I want to thank the team for believing in me and giving me this amazing opportunity.