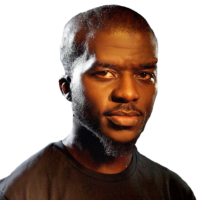 Olu Yomi Ososanya aka Oludascribe, is a screenwriter, filmmaker, video essayist and self-described Omega Level Film Nerd. He’s passionate about cinema as an art form, culture, craft and influencer. After a Bsc from Babcock University, he decided to pursue his love for cinema and attended SAE Institute London earning a diploma in Digital Film Making then a Masters in, Creative & Cultural Industries from London Metropolitan University.

He has worked on; talk shows, talent shows, training/corporate videos, written for television shows like; The Station, Edge of Paradise, The Johnsons, Inspector K and Africa Magic’s Battleground.

His short films have been selected for local and international film festivals such as AFRIFF, BFI Blackstar and the Cannes Short Film corner and contributed to American site for Black and African diaspora film, Shadow & Act.

Bringing the art of the remake into Nollywood
25 Aug  Guardian Arts
Whenever a remake of a film is announced it either raises interests to the possibilities or gets fans in a tizzy. Some remakes are cash-grab based, allowing the studio to capitalize on existing Intellectual Property (IP).

A Question Of Faith
18 Aug  Guardian Life
In November 2018, a trailer was released in the Nollywood film space, a character played by Zainab Balogun parks her car on 3rd mainland bridge, climbs over the rail and then lets gravity do its thing. It stirred debates in WhatsApp groups and the Twitterverse, Did she really jump? How did they pull it off?…

Broaden your African cinema horizons
28 Jul 2019  Guardian Arts
The 40th edition of the Durban International Film Festival (DIFF) started on July 18 and runs till 28. It’s one of Africa’s longest-running festivals with a strong focus on African Cinema, with 180 screenings of new films at this year’s edition. It offers an opportunity for filmmakers and film lovers from around the continent to see the work of emerging African filmmakers and network.

Making A Case For Extreme Ownership In Nollywood
7 Jul 2019  Film
Of all creative artforms, there are few which require collaboration like filmmaking, the reliance on others. With today’s technology a singer can record a track alone in their room with the right software, an illustrator just needs a canvas or an Adobe programme. With film, even a multi-hyphenate writer/director/producer/cinematographer/editor at the very least needs people…

African cinema 2.0
23 Jun 2019  Guardian Arts
The first half of 2019 will be over in a week and two films with African narratives have stood out as some of the best reviewed films of the year so far...

One draft for the road
9 Jun 2019  Theatre
It’s an interesting exercise, reading the early draft screenplay of a film you’ve seen and noticing what changed between that screenplays to what must have been the immensely different final draft of the same film.

‘Hey! I know that guy’ syndrome
26 May 2019  Film
Years ago I had a conversation with a prolific producer and expressed my desire to see a certain plus size actor play characters outside of the goofy fat guy roles everyone seemed to cast him. I had seen him in a dramatic role and he was fantastic, I wondered why so many were wasting his…

The slow death of mystery
12 May 2019  Revue
Once upon a time there was a mystery to movie stars. The average viewer only saw them on the big screen, which required leaving their home, buying a ticket and sitting in a dark room with 100+ strangers for 90 - 120 minutes. There was a clear distinction between television and movie stars. TV stars…

Pick yourself
28 Apr 2019  Theatre
It’s a cultural instinct to wait to get picked. To seek out the permission and authority that comes from a publisher or talk show host or even a blogger saying, “I pick you.” Once you reject that impulse and realize that no one is going to select you–which Prince Charming has chosen another house–then you can actually get to work- Seth Godin

Chameleons and dare devils
14 Apr 2019  Visual Arts
Over the last few decades, film fans have been thrilled and fascinated by the lengths some actors go to transform their bodies and disappear into the role. These thespians are sometimes unrecognizable and you can’t really peg them down. Christian Bale going from emaciation in The Machinist (2004) straight to comic hero muscle mass in…

Bump The Lamp
24 Mar 2019  Visual Arts
In August 2018, Editi Effiong Founder of Anakle, a digital marketing agency, published a powerful article on Medium, titled “Manage It Like That (MILT)” a brilliant piece on our general complicity as citizens in self-imposed mediocrity. From builders, to mechanics to tailors who do shoddy work and with nonchalance say ‘Oga manage it like that”.…

Nobody knows, anything
10 Mar 2019  Visual Arts
“Nobody knows anything” was coined by American Novelist and Screenwriter Steven Pressfield in his 1983 book, “Adventures In the Screentrade: A Personal View of Hollywood and Screenwriting”.
1 2 3 4