By AFP
Share on Facebook Share on Twitter Share on WhatsApp Share on Telegram
Four-year-old Kaka-Hauwa Aji shrieked in pain and sweat rolled down her bare torso, as two nurses in crisp white hijabs disinfected a gaping shrapnel wound on her neck. Her seven-year-old sister, Ya-zahra Aji, lay on the bed opposite, bandages wrapped around her right hand where the shards of molten metal from the off-target Nigerian Air…
1 of 10 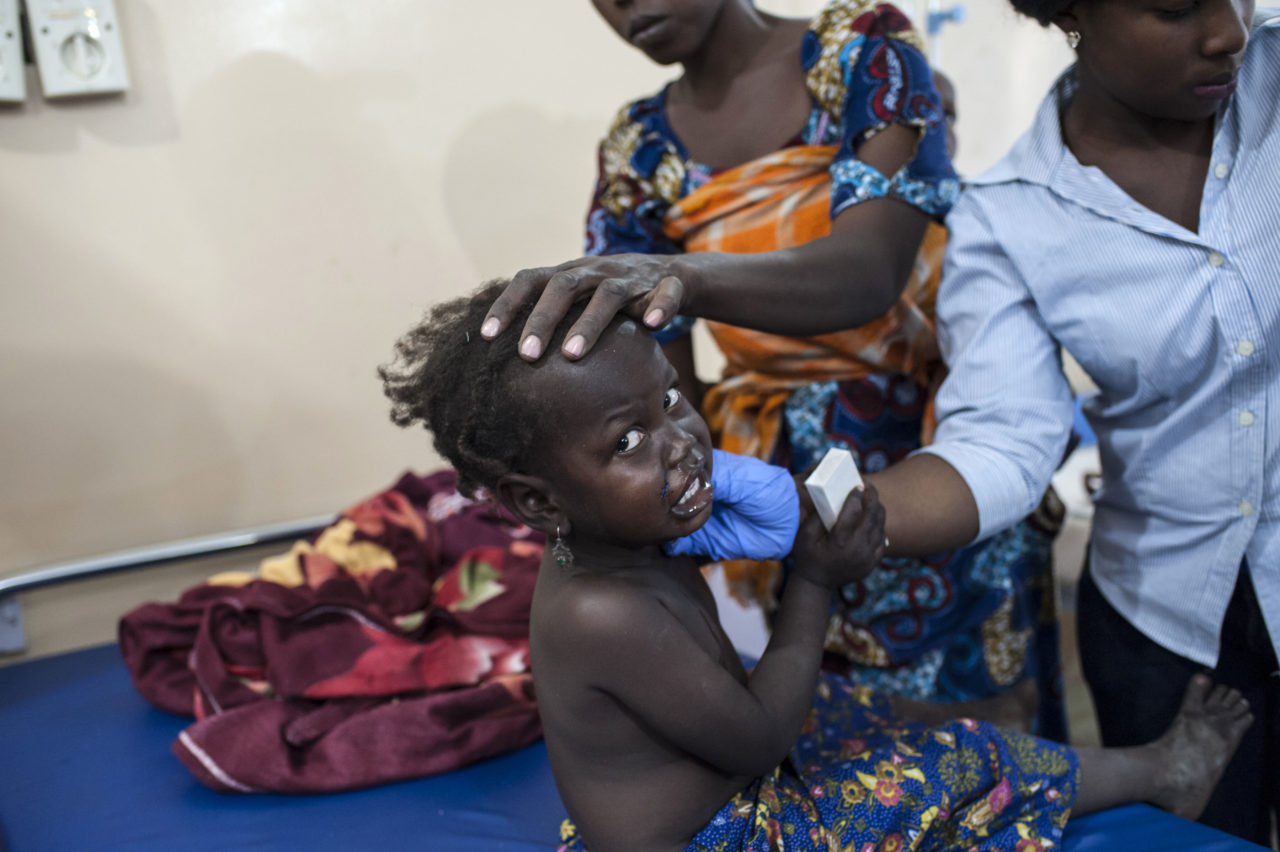 A mother and nursing staff tend to a young girl at the Maiduguri State Specialist Hospital on January 18, 2017. At least 70 people have died in an Internally Displace Camp in Borno State from an accidental military airstrike on January 17, 2017, intended to target Boko Haram militants in Rann, in north-eastern Nigeria. / AFP PHOTO / STEFAN HEUNIS 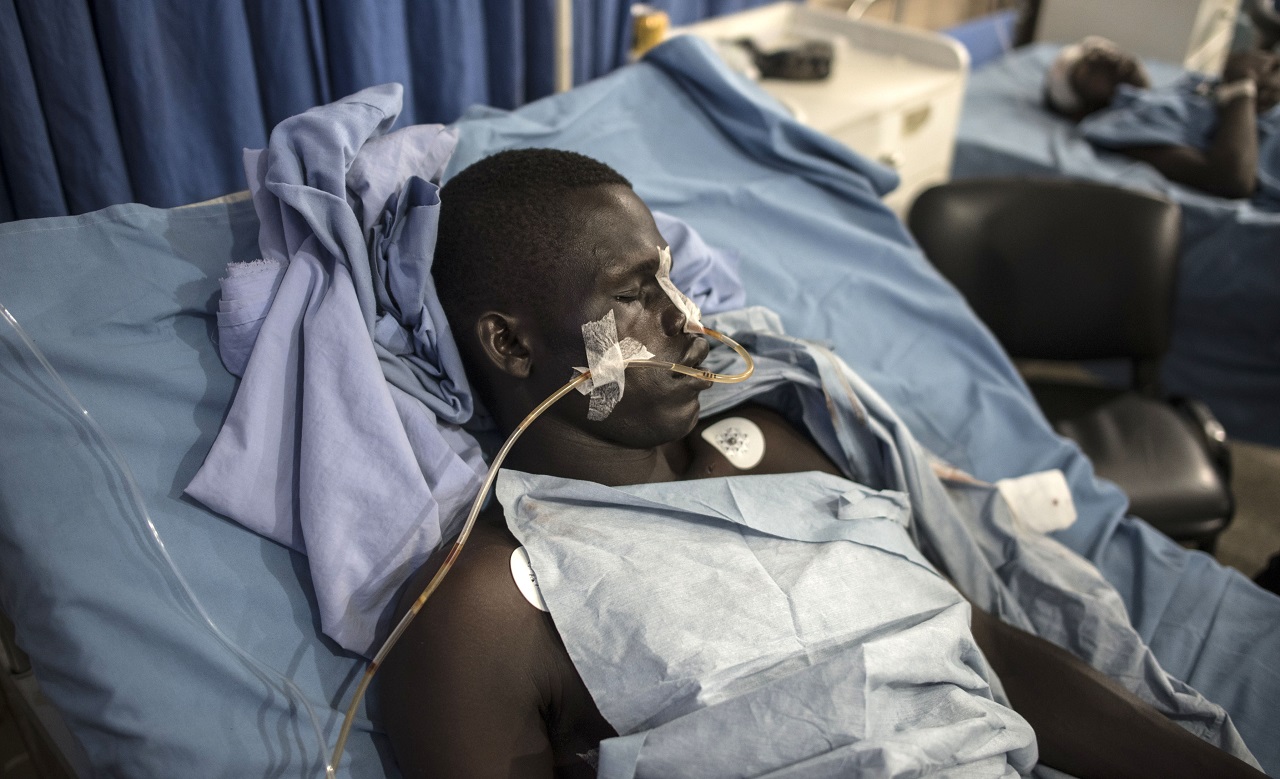 An man injured during the accidental airstrike recovers in the Mens Ward at the Maiduguri State Specialist Hospital on January 18, 2017. At least 70 people have died in an Internally Displace Camp in Borno State from an accidental military airstrike on January 17, 2017, intended to target Boko Haram militants in Rann, in north-eastern Nigeria. / AFP PHOTO / STEFAN HEUNIS

Four-year-old Kaka-Hauwa Aji shrieked in pain and sweat rolled down her bare torso, as two nurses in crisp white hijabs disinfected a gaping shrapnel wound on her neck.

Her seven-year-old sister, Ya-zahra Aji, lay on the bed opposite, bandages wrapped around her right hand where the shards of molten metal from the off-target Nigerian Air Force bomb pierced her skin.

On Tuesday morning, the girls’ mother had left them and their six brothers and sisters in a tent at the camp for displaced people in Rann, northeast Nigeria, to go to a Red Cross food distribution post.

Moments later at least 70 people, including aid workers, were dead and more than 100 others injured.

“We first heard the roar of the fighter jet and suddenly there was a huge explosion which sent us running because it was clear the camp was under attack,” said Fati Yasin, who is in her 30s.

“As we ran in all directions we heard a second explosion,” she told AFP, her elder daughter now sobbing in pain.

Yasin said she rushed to the tent and found the two girls injured. Their traumatised siblings were crying beside them.

Two strikes
Seven beds in a ward run by the International Committee of the Red Cross (ICRC) at the Borno State Specialist Hospital in Maiduguri were occupied by victims of the bombardment on Wednesday.

In one, a seven-month-old baby boy lay sedated after being treated for shrapnel wounds to the neck and foot.

Ngwari Mustapha said she was carrying her son on her back and was running from the first air strike when he fell.

“My other child was injured in both legs,” she said in the Shuwa Arab language spoken in parts of the far north of remote Borno state near the border with Cameroon and Chad.

“My major grief is that my child was not harmed by Boko Haram but by the military that should protect us from Boko Haram.”

Nigeria’s military has blamed the air strike on the “fog of war”, saying its intended target was Boko Haram Islamist fighters reportedly spotted in the Kala-Balge area, of which Rann is part.

The conflict, which has left at least 20,000 dead since it began in 2009, has also made more than 2.6 million others homeless, leaving tens of thousands in dire need of food, shelter and healthcare.

Doctors Without Borders (MSF), which arrived in Rann last Saturday to conduct vaccination and malnutrition screening programmes, said 20,000 to 40,000 people were living in makeshift shelters there.

None of the medical charity’s staff was killed or injured but three aid workers from a Cameroonian firm hired by MSF to provide water and sanitation lost their lives, as did six Nigerian Red Cross workers.

Babagana Mohammed was one of the 11 local Red Cross staff injured. He suffered a broken leg, arm and shoulder.

“Many people were burnt to death and many others were injured,” he said from his bed, with his limbs in plaster.

“The jet struck a second time and killed more people and we couldn’t distribute the food aid due to the bombardment.”

Mass casualties
A total of 74 wounded were evacuated from Rann to Maiduguri in the two days following the bombing, the ICRC said in an update late on Wednesday.

Baba Shehu Mohammed, a surgeon at the Borno State Specialist Hospital, said most have broken limbs, abdominal and chest injuries. Seven have had major operations, he added.

The public hospital had received 38 victims by Wednesday afternoon and 21 were being airlifted from Rann, said ICRC health coordinator Padshah Hashemi Said.

The ICRC runs a 50-bed facility at the hospital that specialises in trauma cases — the injuries caused by Boko Haram’s bombs and bullets.

But the unit was expected to fill up as military and humanitarian helicopters brought in more of the injured. In preparation, the hospital had freed up some of its 500 beds.

Nigeria’s military maintains it did not deliberately target aid workers and has called the incident an accident.

The bombing has sent shockwaves through humanitarian agencies working in the crisis-hit region, potentially straining already tense ties with the authorities who have accused some of profiteering.

Agencies have called for better safeguards for the displaced and protection in the camps across the northeast.

Politics
PDP Presidential Campaign Council appoints Dele Momodu, others as directors
2 hours ago
The Campaign Organisation of the Peoples Democratic Party (PDP) has appointed former presidential aspirant and the publisher of Ovation Magazine, Dele Momodu, as Director of the campaign, overseeing Strategic Communications. In a news release signed by the Campaign Organisation’s Director-General and Governor of Sokoto State, Aminu Tambuwal, 16 others were also appointed as directors or…
World
Musk says Twitter has refused to suspend litigation on buyout
3 hours ago
Elon Musk asked a US judge Thursday to suspend Twitter's lawsuit over their troubled takeover negotiations after the embattled social media company baulked at the Tesla's chief's demand to freeze the litigation.
Sport
Rashford brace gives Man United come from behind win in Cyprus
3 hours ago
Manchester United came from behind to snatch a crucial 3-2 away win against Cypriot outfit Omonia in the Europa League on Thursday thanks to a second-half brace by Marcus Rashford.
Nigeria
Fuel queues: Don’t panic, we have enough supply in stock – NNPC
4 hours ago
The Nigerian National Petroleum Company Limited (NNPC Ltd) has informed the public that it has sufficient stock of petroleum products and that the public should not give in to panic buying.
Sport
Messi says 2022 World Cup will 'surely' be his last
4 hours ago
Argentina captain Lionel Messi said Thursday that the 2022 World Cup in Qatar will "surely" be the last of his career. "It's my last World Cup, surely. I feel good physically...

Nigeria
IDPs, asylum seekers, others at high risk of hunger, malnutrition, says refugee commissioner
21 Dec 2021
The Federal Commissioner, National Commission for Refugees, Migrants and Internally-Displaced Persons in Nigeria, Imaan Sulaiman-Ibrahim, has expressed worry that Nigeria has been categorised among the countries threatened by famine...

Politics
Buhari, dealing with unceasing security threats
21 Dec 2021
Several high caliber meetings of security heads have taken place at the Presidential villa to address the failing security in the country.
APO Press Releases
WFP responds to emergency food needs of the new Cameroonian refugees streaming into Chad
22 Dec 2021
Download logoThe United Nations World Food Programme (WFP) is providing emergency food assistance to 104,000 newly-arrived Cameroonian refugees in Chad who are in dire need of humanitarian assistance after being forced to flee their homes due to inter-communal conflicts in north-eastern Cameroon. Starting on 05 December, tens of thousands of Cameroonian refugees have been fleeing…
APO Press Releases
UN-Habitat trainings on sustainable development planning to serve as benchmark for locally-led sustainable settlement solutions
23 Dec 2021
Download logoBuilding on similar successful steps, UN-Habitat has held training workshops to provide guidance and capacity building on settlement planning so stakeholders can implement locally-led solutions and provide beneficiaries with training on efficient and sustainable use of land. The training workshops held by UN-Habitat was part of the project “Sustainable, Safe and Durable Integration of…