Bello El-Rufai, Sexual Abuse Tweets And Scapegoating Of The Woman

By Tonye Bakare and Michael Bamidele
Share on Facebook Share on Twitter Share on WhatsApp Share on Telegram
“Violence against women in Nigeria is almost accepted as a fact of life in some cultures that perceive women as the property of their husbands.” _ United Nations Nigeria is a country of anything-goes: the powerful ride roughshod on the hapless every minute; the political class are lords in a crazy manor; and the woman,…

“Violence against women in Nigeria is almost accepted as a fact of life in some cultures that perceive women as the property of their husbands.” _ United Nations

Nigeria is a country of anything-goes: the powerful ride roughshod on the hapless every minute; the political class are lords in a crazy manor; and the woman, doubly undone by the Nigerian society and her grossly limited access to power, is sometimes deliberately victimised.

And if you are the governor’s son, maybe you are allowed to threaten a woman, who most likely was not aware of your existence; whom you have never seen and who, most importantly, did not deserve your vile threat with sexual abuse.

Whichever way this is spun, Bello El-Rufai’s tweet at a Twitter user @thanos_zer(he told The Guardian he will like to remain anonymous) was a clear threat of sexual violence against the latter’s mother, is undeniably in bad taste and betrays the condescension with which Nigeria’s ruling elites view the people.

It is even more worrisome that @thanos_zer’s tweet that elicited such crude language from Bello El-Rufai was in the same fashion as that of El-Rufai’s which triggered @thanos_zer’s reply.

“There is nothing as radioactive as an incompetent leader during a time of crisis,” El-Rufai tweeted on Saturday evening. “The United States of America is a case in point. A few states in Nigeria too.”

@thanos_zer replied: “How about the absentee president in Nigeria?” El-Rufai quickly erroneously profiled the ‘troublemaker’ as a Southeasterner and called his governor incompetent.

Unfazed, @thanos_zer responded, saying: “I don’t shield anyone who’s inept. I can’t say the same about you. You’re daddy’s boy and of course, nobody attacks the finger that feeds them. Buhari’s ineptitude is mind-blowing. Yes, I said it and you’re not going to make me disappear!”

What started out as a comment on the leadership style of the President of the United States by Bello El-Rufai quickly erupted into a tirade of insults in the nature of sexual innuendos and ethnic slurs at critics.

Bello El-Rufai, 32, is one of the sons of the governor of Kaduna, Nasir El-Rufai. His mother Hadiza El-Rufai, 59, is a novelist whose debut novel – Abundance of Scorpions – highlights the hard choices a woman has to make in the Nigerian society. One of those women include @thanos_zer’s mother.

Perhaps ad hominem is Bello’s preferred choice of weapon in the face of fire. He once tweeted that “I was trained to destroy my opponents” while responding to those who taunted him on the arrest of a former senator representing Kaduna Central Senatorial district, Shehu Sani, for alleged extortion by the Economic and Financial Crimes Commission (EFCC).

The Easter Sunday debacle also alluded to a deeply-rooted bad blood between the Northerners and the Southerners as Bello, a Northerner, made it a point to consistently reference leaders and the people from the southern part of Nigeria. In one of such, he said, “all useless leaders in the SE (Southeast) you urchins like to ignore” and in another, he called the family of a Twitter user “Ndi ignorant.” Ndi is the Igbo word for “people.”

Such expressions are reckless in a nation where religious, ethnic and political sentiments easily devolve into offline violence. One would expect better from someone whose proximity to power should give a sense of responsibility. In fact, such statements are antithetical to his mother’s position in an interview with Brittle Paper.

“I think when it comes to religion, it’s religious intolerance,” Mrs. El-Rufai said in the interview. “Basically, I guess what I’m trying to say is that people should take it easy, religion is personal, and we should be more tolerant.”

No. Not all is fair in love and war
Before Mrs El-Rufai’s tongue-in-cheek apology for her son’s tweets, the novelist’s initial reaction was shocking.

“Don’t @ me. Sow the wind, reap the whirlwind,” she wrote on Twitter on April 12. “All is fair in love and war. My belief: Respect everyone, but take no shit from anyone. I didn’t see any threats of rape. I would never condone that.”

Mrs El-Rufai she was initially unaware of her son’s offensive comments.

Hadiza and Bello are Muslims. Islam forbids unequivocally the maltreatment of women even in a WAR situation. The first Caliph Abu Bakr famously told Muslims not to hurt the aged, women and children during war.

Abu Bakr said: “Stop, O people, that I may give you ten rules for your guidance in the battlefield. Do not commit treachery or deviate from the right path. You must not mutilate dead bodies. Neither kill a child, nor a woman, nor an aged man. Bring no harm to the trees, nor burn them with fire, especially those which are fruitful. Slay not any of the enemy’s flock. Save for your food. You are likely to pass by people who have devoted their lives to monastic services; leave them alone.”

Caliph Abu Bakr’s rules, Islamic scholars said, were based on the sayings and practices of the Prophet Muhammad.

A familiar pattern
In July 2019, Premium Times published a video of Nigerian senator Elisha Abbo assaulting a woman in a sex toy shop in Abuja. The senator confirmed that he was the man in the video but he insisted he was also assaulted, without evidence, by the shop owners.

It is official complicity such as this and lack of deterrent that allows violence against the woman fester without care. It is why Bello El-Rufai could think to threaten a woman he never knew with sexual violence. If a senator can get away with physical assault, a governor’s son, who is also a legislative aide to a serving senator, can get away with a ‘lesser’ evil.

Like Mrs El-Rufai said, “Never ever should sexual abuse be employed as ammunition in public/ private exchanges, no matter the provocation.” 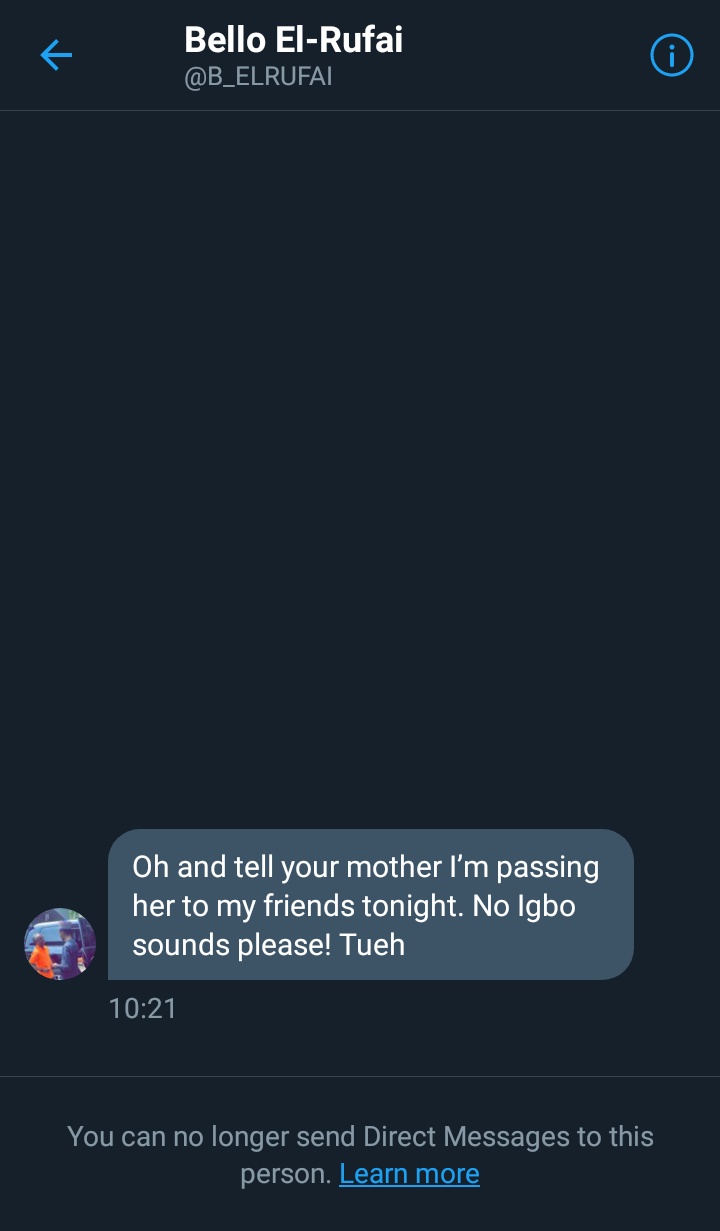 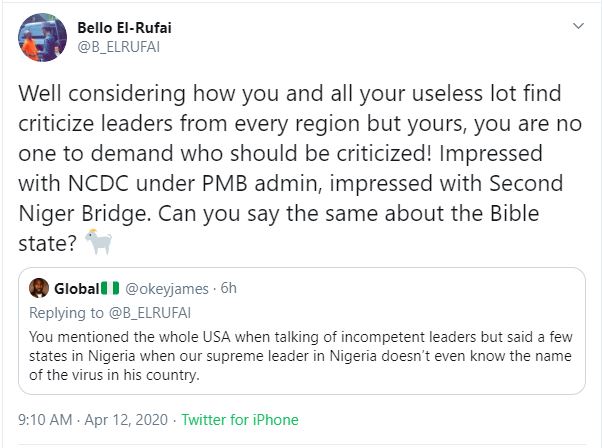 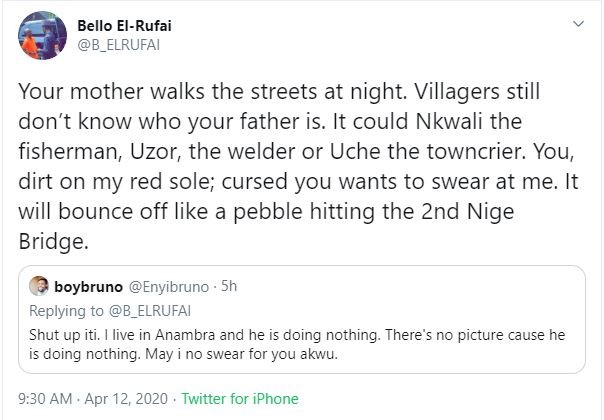 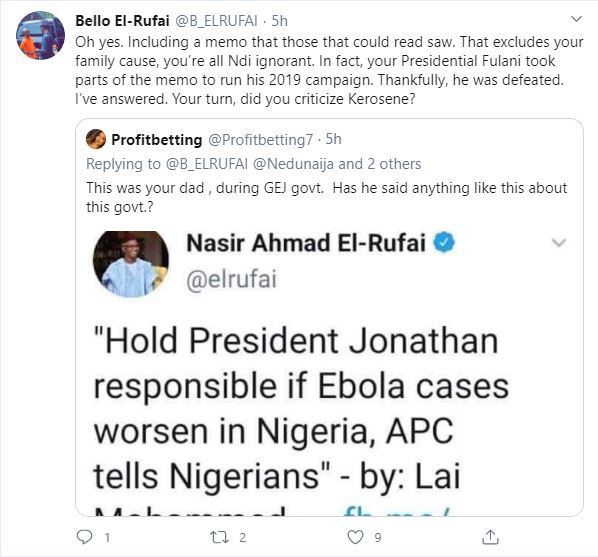 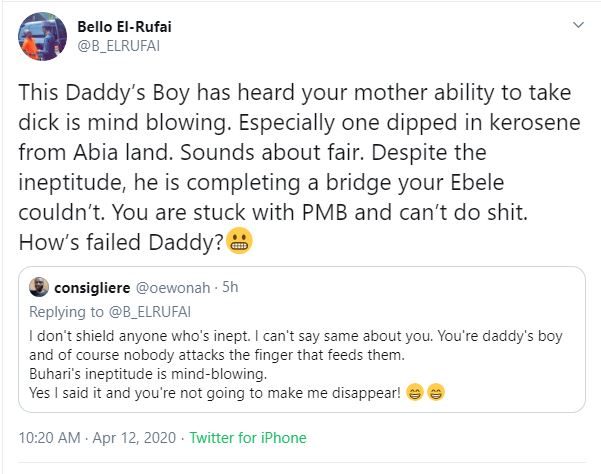 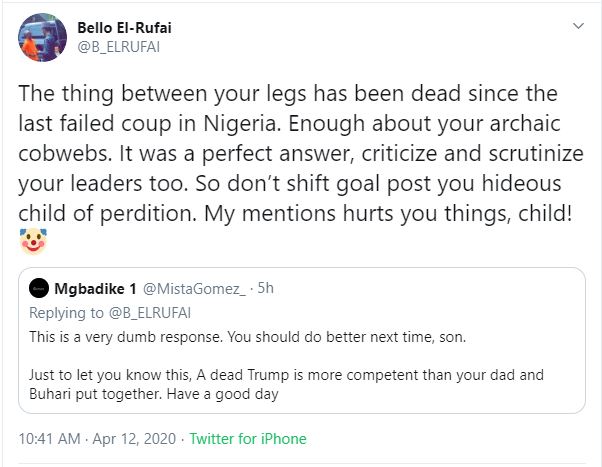 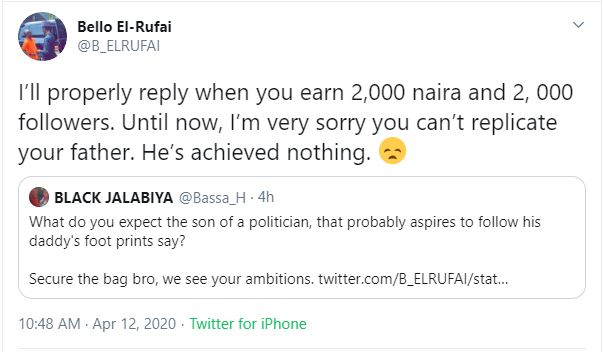 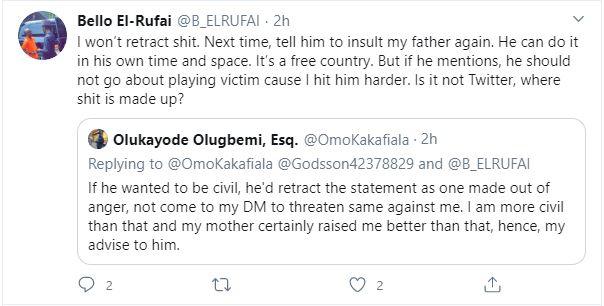 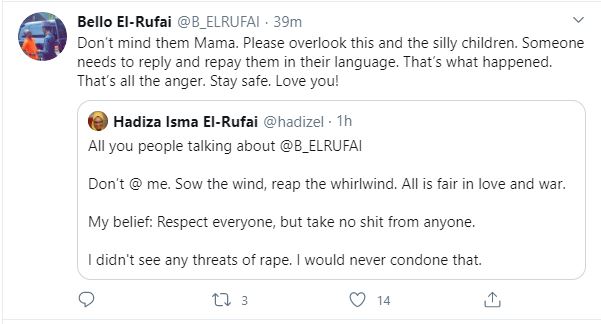 Music
AFRIMA 2021… Day African Stars Came To Town
5 hours ago
It was nearly 9:00 p.m. and the screams nearly threw one off the seat. In a flash, the entire auditorium was agog with excitement as the Rexxie-produced groove anthem, Ko Por Ke, rented the air.

Film
Chris Ihidero Serves Man Pikin
7 hours ago
Titled Man Pikin, the 26-part series was created and produced by Ihidero, one of the most respected TV writers and producers on the continent, and owner of PinPoint Media, a Nigerian film and media company working to industrialize content creation and distribution in Africa.

Music
Afropop Teen Star, Phatiah Returns With 0
7 hours ago
Over the last three years, the scope of Nigerian Afropops music has evolved to be inclusive of every demographic within its core, leading to the rise of powerful Aftopop stars that are unconventional of the typical musical stereotypes.

Music
Adele's '30' Is 2021's Top-Selling Album
3 days ago
Adele's 30 is 2021's top-selling album in the Unites States after selling over 500,000 copies in just three days. Billboard reports that Adele's 30 album released on Friday after a six-year hiatus has already become 2021's top-selling album in the US. Between November 19 and November 21, more than 500,000 copies of the album had been sold…

Music
Olivia Rodrigo Dominates 2022 Grammy Awards Nominations
3 days ago
Olivia Rodrigo has taken the front row at the 2022 Grammy Awards with nominations in all four of the main category.    The 18-year-old singer's Driver's License album has been nominated for best album, best new artist, record of the year and song of the year.  She faces competition from Billie Eilish and Lil Nas X in…

Film
Tinubu Mourns Baba Suwe
8 hours ago
National Leader of the All Progressives Congress (APC), Asiwaju Bola Tinubu, has commiserated with the family and professional colleagues of the late Mr. Babatunde Omidina, aka Baba Suwe, over his death.

Film
Love And Hate': Bollywood In Spotlight Of 'Call My Agent' Spinoff
1 day ago
The director behind a biting look at India's entertainment industry says the backroom dealings and bold personalities of Bollywood have proven a rich target for satire. Shaad Ali's latest venture is a local adaptation of a runaway hit Netflix series that follows four hapless French talent agents as they wrangle and coddle their celebrity clients.…

Film
Black-ish Stars Say Goodbye As They Wrap Up Production
1 day ago
Stars of ABC sitcom Black-ish took to social media to share their goodbyes as the show wraps up production after eight seasons. Written by Kenya Barris, Black-ish follows successful advertiser Andre Johnson(Anthony Anderson) and his African American family as they navigate their life living in Sherman Oaks's suburban neighbourhood. Andre tries to keep his family…

Film
'Euphoria' Season 2: What To Expect
1 day ago
Euphoria returns with stars Zendaya and Hunter Schaffer as they prepare to tell 'Euphoria' fans another inspiring story in season 2. The Sam Levinson show will debut its second season on January 9 at 9 PM ET. The series will air weekly on HBO and its online streaming platform HBO Max. Euphoria season 2's cast includes Primetime…

Film
Steve Burton Fired From 'General Hospital' For Refusing COVID-19 Vaccine
2 days ago
General Hospital star Steve Burton was fired from the soap opera on Tuesday after he refused the COVID-19 vaccine mandated for all actors on the show.  Burton's character Jason Morgan (previously Jason Quartermaine) had been a regular on the show since 1992, except for a brief hiatus from 2013 to 2017, when he had a multi-year…

Nigeria
We’re set for December 4 LG poll — Ekiti SIEC
22 Nov
The Ekiti State Independent Electoral Commission (EKSIEC) and the security agencies in the state say they are ready for the conduct of the Local Government election slated for Dec. 4.

Tennis
Omotoso hails organisers of Efunkoya National Cadet Table Tennis tourney
4 days ago
The Lagos State Commissioner for Information and Strategy, Gbenga Omotoso, has extolled the effort of former players to sustain the growth of table tennis in the country with the organisation