By Guardian Nigeria
Share on Facebook Share on Twitter Share on WhatsApp Share on Telegram
This year, Veuve Clicquot is launching its globally renowned Bold Woman Award in Nigeria - the first and longest-running international award of its kind. This award is set to honour the impact of female leadership, innovation, and entrepreneurship in Nigeria. 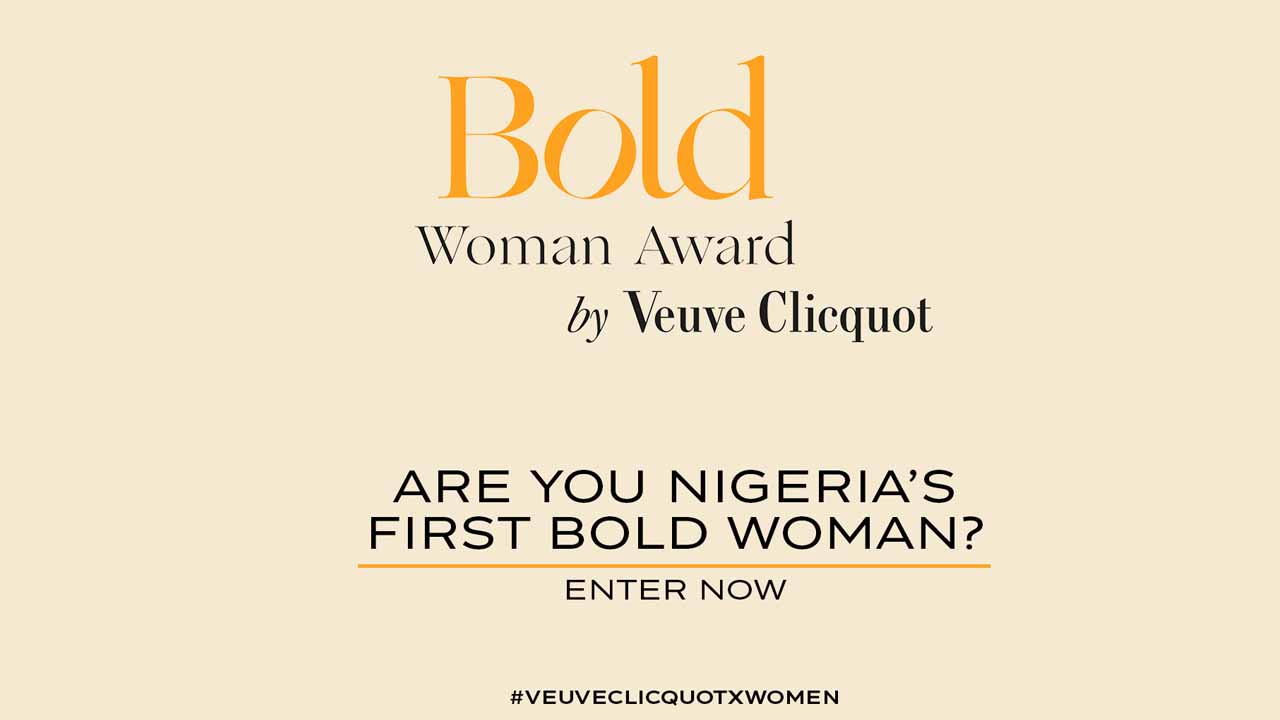 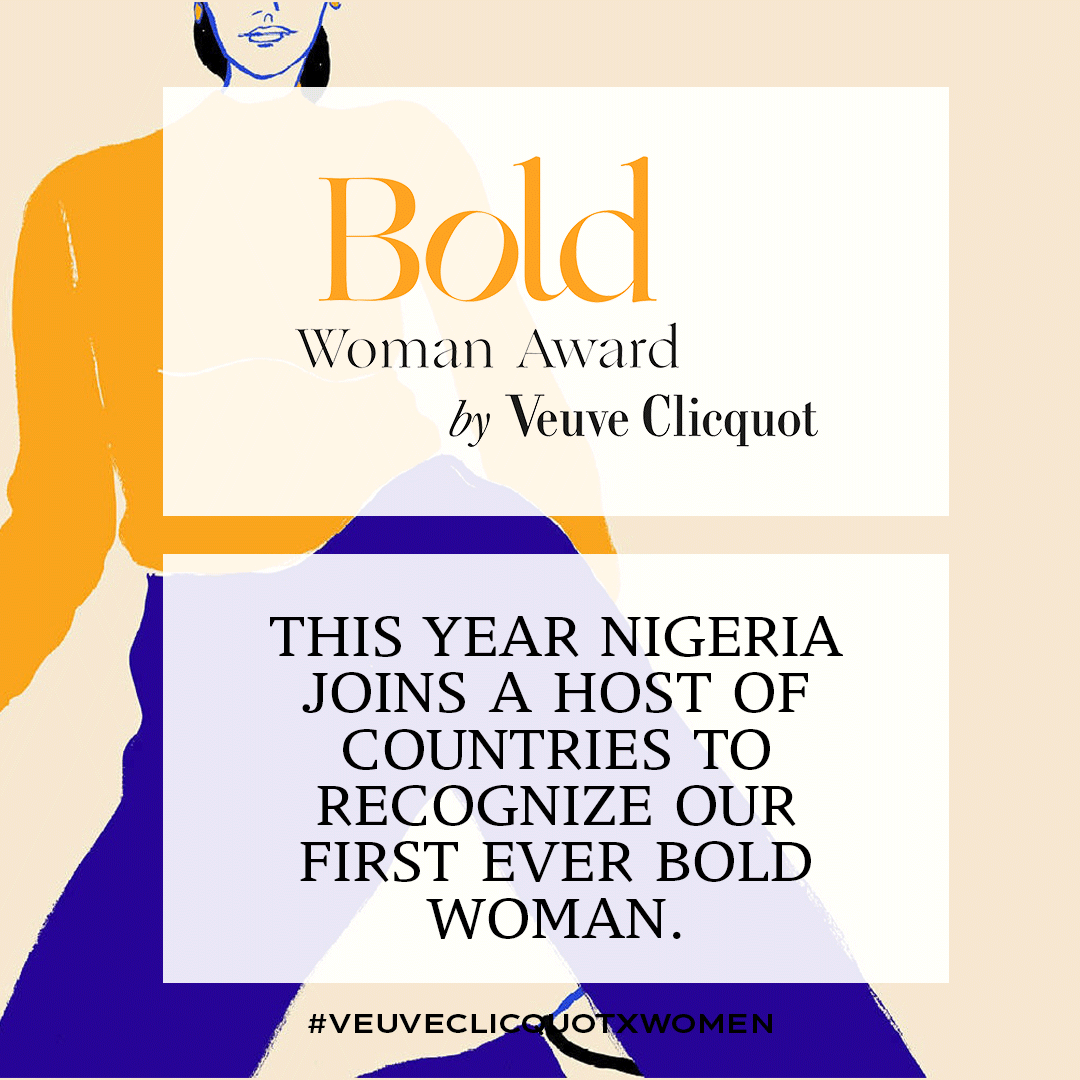 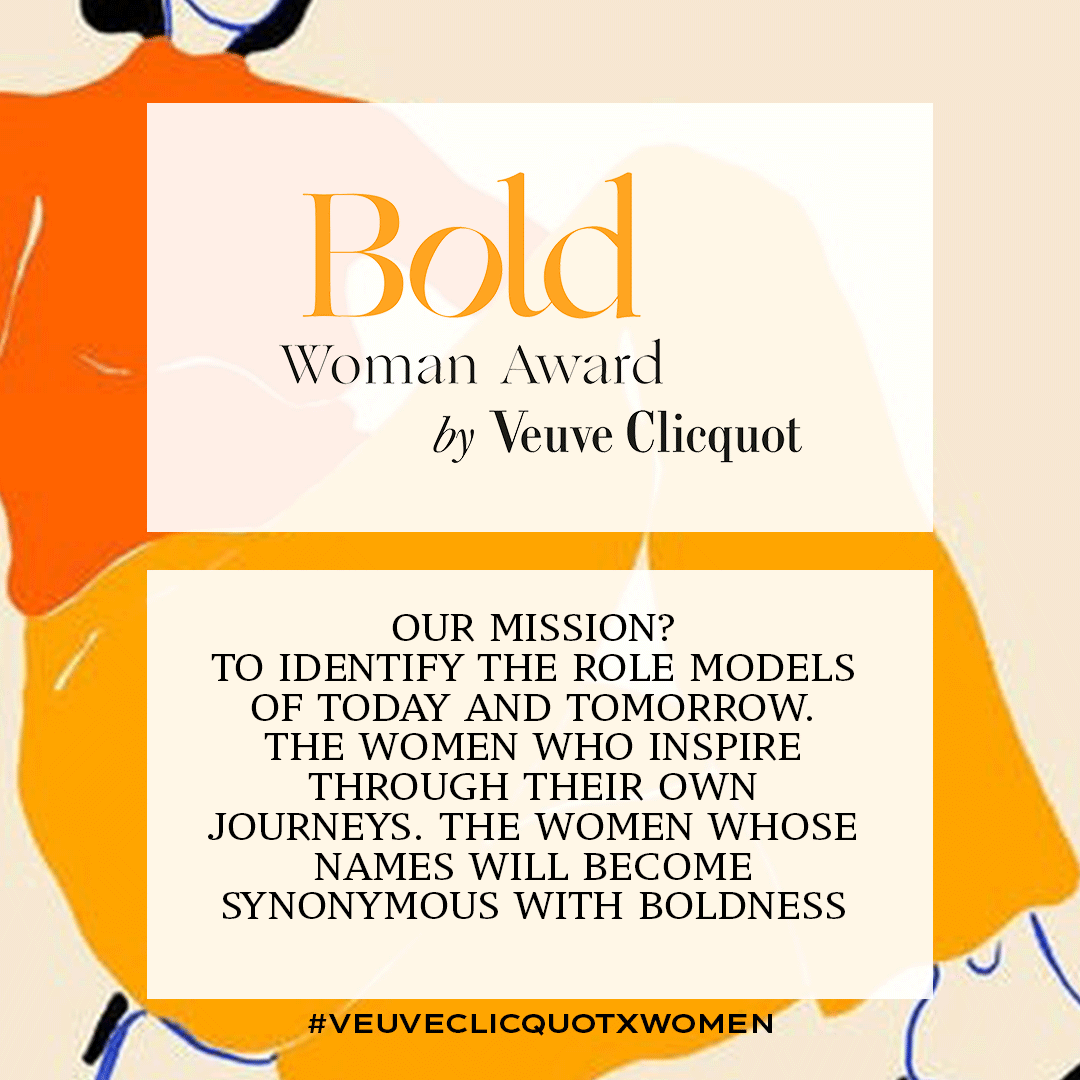 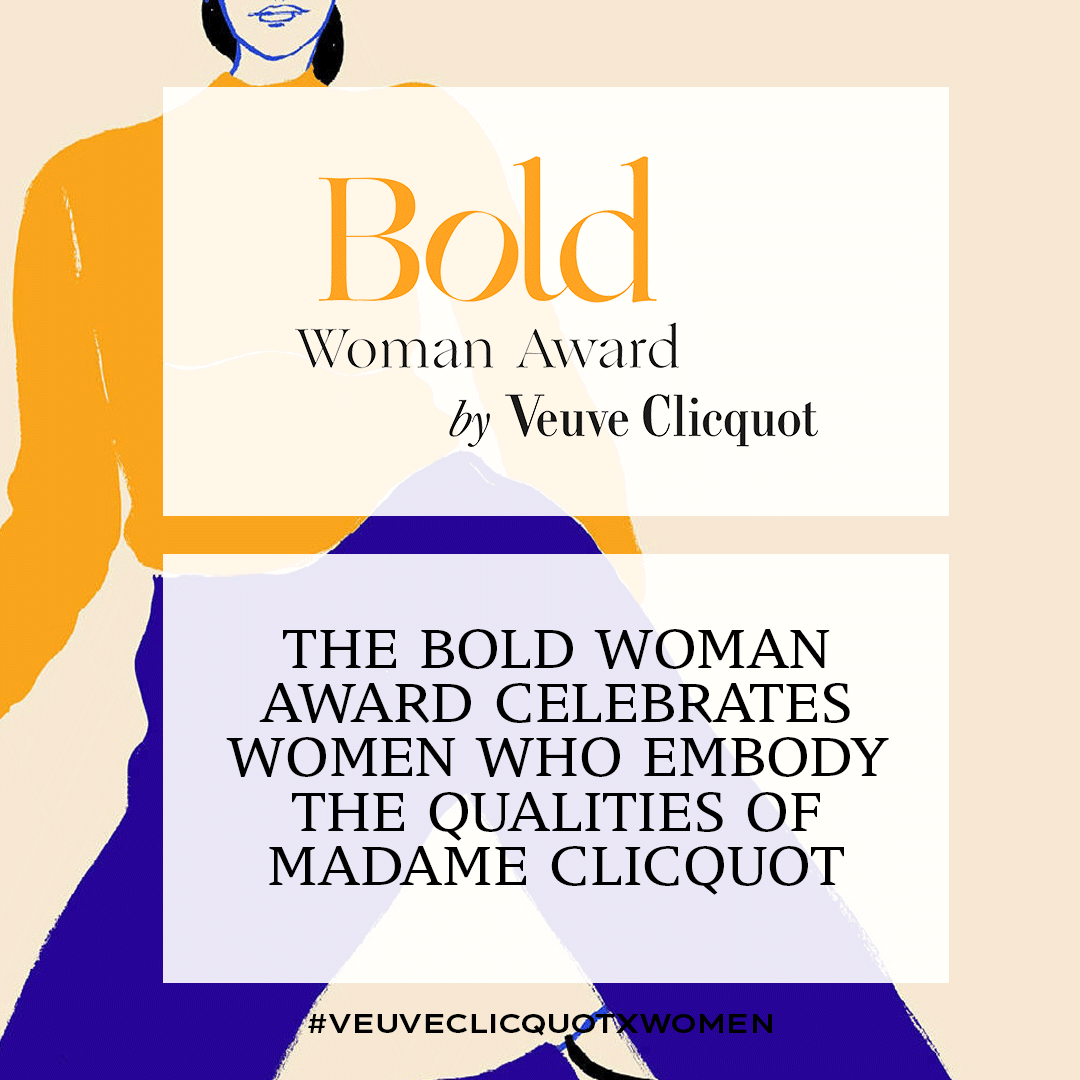 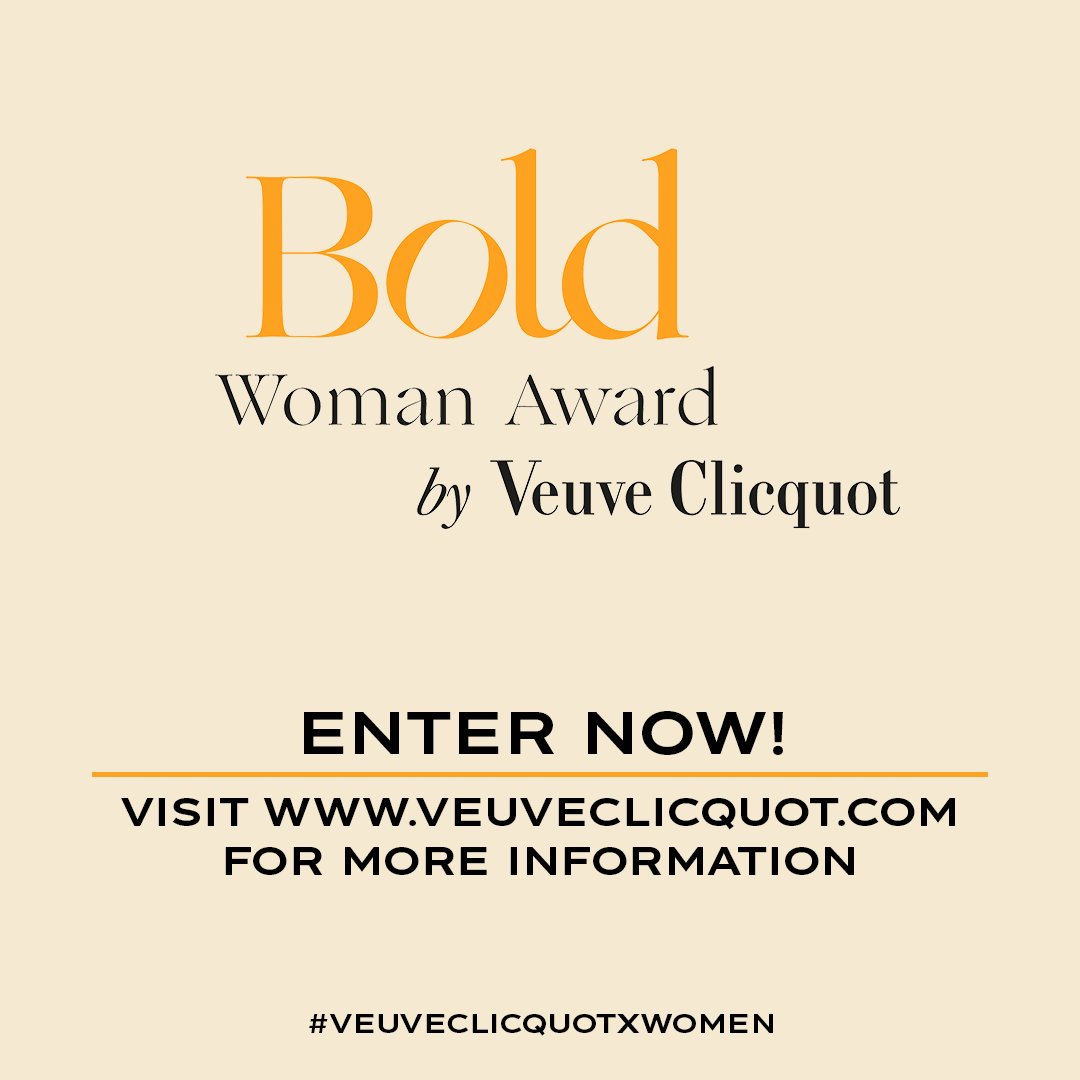 This year, Veuve Clicquot is launching its globally renowned Bold Woman Award in Nigeria – the first and longest-running international award of its kind. This award is set to honour the impact of female leadership, innovation, and entrepreneurship in Nigeria.

Launched in 1972, the Bold Woman Award is the first and longest-running international award of its kind, and this year is the 50th year of paying tribute to audacious businesswomen. It’s an award that not only commends the work of fearless female business leaders, but also seeks to change the way that business is done – calling for higher ethical standards, transformational practices, and wider inclusion through the overarching Bold by Veuve Clicquot programme. By emboldening generations of audacious female leaders, the 250-year-old champagne house is securing an impactful future for female entrepreneurs globally.

“The Bold Woman Award continues to pay tribute to a woman whose tenacity and creativity led to entrepreneurial success – Veuve Clicquot’s very own bold woman, Madame Clicquot. Her story is one of audacity, and entrepreneurial spirit – in 1805, widowed at the age of 27 years old, she went on to revolutionise an entire industry. An exceptional achievement in a time when women couldn’t open their own bank account, let alone independently own or run businesses,” says Jean-Marc Gallot, CEO of Veuve Clicquot. “It’s in her spirit that we work to identify and elevate these women’s journeys, emboldening successive generations of females to lead with audacity. As such, this is so much more than an accolade for their contribution, it’s an engine for revolution.”

Launching in Nigeria for the first time, exceptional female Nigerian leaders will now join the ranks of an illustrious list of over 410 audacious women honoured by this prestigious award in 27 countries worldwide.

In response to society’s evolution, the award became part of an international program in 2019: Bold by Veuve Clicquot.  Bold by Veuve Clicquot is deployed around the world via a series of initiatives and events to generate conversations for more impact, inclusivity, and visibility. The programme supports and gives women entrepreneurs a voice, encouraging future generations to be even more audacious.

To enter the Bold Woman Award, candidates must be founders or CEOs of a business for more than three years, demonstrate transformational and evolutional traits in their field, and support growth for at least two years, while maintaining an ethical approach to business.

Three finalists will be selected by an esteemed jury and will be invited to attend The BOLD Woman Award ceremony in October 2022 where a winner will be unveiled. The Bold Woman Award winner will travel to Reims, France for an immersion in the history, tradition, and effortless art de vivre of Maison Veuve Clicquot.

The Nomination entries for the Bold Woman Award are now open and finalists will be selected by an independent panel of judges.

Entries are open to Nigerian businesswomen via a simple form on https://www.veuveclicquot.com/en-int/bold-woman-award-nigeria-2022-edition.

In 1805, Madame Clicquot took the reins of the House after the death of her husband, at a time when women did not have the right to work or even hold a bank account. Over the years, she revolutionised the sector. To mark its 200th anniversary, Veuve Clicquot decided to pay tribute to this great, daring woman, and in 1972 created the Veuve Clicquot Business Woman Award (Bold Woman Award), followed by the Clémentine Award (Bold Future Award) in 2014. For nearly 50 years, the House has honoured and featured women who have built, taken on or developed a business – to date, 410 women across 27 countries. In response to society’s evolution since 1972, starting in 2019 the award has been part of an international program: Bold by Veuve Clicquot, a series of initiatives to generate conversations around the world, designed for more impact and inclusiveness.

What's New
Apple To Release Will Smith's First Film "Emancipation" Since Oscars
8 hours ago
Apple will finally release Will Smith's next major film, "Emancipation," this December after holding it in limbo in the wake of his Academy Awards slap of Chris Rock. (Oct. 4) Directed and produced by Antoine Fuqua, the film (Training Day). Since slapping Chris Rock in front of a live audience at the 94th Academy Awards,…

What's New
Joeboy Takes Asa's 300 Million Naira Copyright Lawsuit For Jokes
10 hours ago
In a recent discord brewing between Asa and Joeboy, the Fire on the Mountain singer has issued a copyright lawsuit against Joeboy for "Contour." Nigerian musician Joeboy uploaded a letter from Asa's Lawyers that contained claims of a copyright lawsuit relating to the creation of Joeboy's "Contour" on his Instagram Story. The composition of the…

Food
How To Make Home Made Grilled Croaker Fish And Chips
10 hours ago
Grilling is a cooking process that involves marinating the food and then placing it on direct heat to make ready-to-grill foods like croaker fish into the perfect smoky perfection. Here is that perfect croaker grill fish recipe to pair with chips to Netflix and chill anytime any day Ingredient 1/4 cup salt Cameroon pepper, 1 teaspoon…

What's New
Whoopi Goldberg Corrects A Reviews Claim That She Wore A Fat Costume for "Till"
11 hours ago
Whoopi Goldberg is clearing the air after a review of her most recent movie, "Till," implied that Goldberg was filming while wearing a fat costume. Goldberg is only mentioned briefly in a review that claims that she was "in a distracting fat suit" for her part as Emmett Till's grandmother. Since then, the line has…

Music
My music style is rooted in African culture - CEF
1 day ago
A Nigerian-born singer, song writer and multi instrumentalist, CEF, recently hosted journalists to the listening session of one of his albums. The contemporary, prolific live musician, presented an album with seven tracks titled 'Jide Ofor'. While six of the tracks were rendered in Igbo, one is titled 'Animal Farm' was rendered in English. CEF leads…

Music
Nigeria at 62: Reminiscing On The Growth Of Nigeria’s Music Industry
3 days ago
When Veno Mariaghae prophesied it nearly four decades ago, most people might have dismissed her words as wishful thinking...

What's New
Incarcerated Singer R. Kelly Is Mandated To Compensate Victims
29 Sep
The multi-platinum R&B singer Kelly, who has been found guilty of sex crimes twice this year, will have to pay at least $300,000 in reparations to some of his victims, a federal judge said. U.S. District Judge Ann Donnelly stated during a hearing in Brooklyn that the money will reimburse two women, going by the…

What's New
Gangsta's Paradise Crooner Coolio Passes On At 59
29 Sep
The Grammy-winning rapper Coolio passed away on Wednesday after being discovered unconscious at a friend's Los Angeles residence, according to the New York Times. He was 59. The single "Gangsta's Paradise," from the 1995 album of the same name, is what made Coolio, real name Artis Leon Ivey Jr., famous. The next year, that song,…

Music
AKA Ends Long Term Beef With Burna Boy
29 Sep
The Award-winning South African rap mogul AKA has now reconciled and ended beef with the Nigerian Big star, Burna Boy. After a brief Interview with some SA music artist portals, We have decided to bring you all the things you might have missed earlier about the Beef. Read Carefully below. In July 2019, the rapper…

Film
Marvel Unveils "Black Panther 2" Trailer
1 day ago
Marvel Studios has released the official trailer for its long awaited sequel "Black Panther: #WakandaForever." A sequel to its 2020 blockbuster "Black Panther" the new film tells the story of the Wakanda People in a world following the death of their beloved king T'Challa (Chadwick Boseman). As revealed previously, Boseman's character was not recast, rather the…

Film
The Brotherhood in the cinemas across Africa
26 Sep
The much-anticipated crime-action blockbuster, Brotherhood, a movie based on two brothers (twin) being on opposite sides of the law – the police force and a notorious gang of robbers

Visual Arts
Again, Enwonwu’s ‘Anyanwu’ leads auction sale in Lagos
28 Jun 2017
Another Nigerian record for Ben Enwonwu was achieved during the 18th Arthouse auction of modern and contemporary art for 2017 at Kia Showroom, Victoria Island, Lagos, with a total sale of N166,156,000.

Events
Guardian Life Events This Weekend
27 Oct 2017
Friday is here again (YAY!) and, as always, we have compiled a list of all the wonderful events happening this weekend. Scroll through to see which events you’d like to attend. Heineken Lagos Fashion and Design Week Lagos plays host to a multi-day fashion event platform that aims to drive the Nigerian and ultimately, the…

Guardian Arts
Again, 19th Lagos art auction tests economy ‘out of recession’
22 Nov 2017
After generating a new local auction record for modernist, Ben Enwonwu, at the last May sales, Arthouse Contemporary returns, as a test to Nigeria’s art market against the ongoing distressed state of the economy.

Visual Arts
On paper, Fadugba’s strokes separate ‘Value’, ‘Worth
2 Dec 2017
Five years after Modupeola Fadugba quietly entered the Lagos art scene, she is back, releasing her energy of contemporary expression onto the soft surface of burned papers. Fadugba had announced her presence when she picked the Outstanding Production prize for a structural design and game installation at African Artists Foundation (AAF), National Art Competition in…