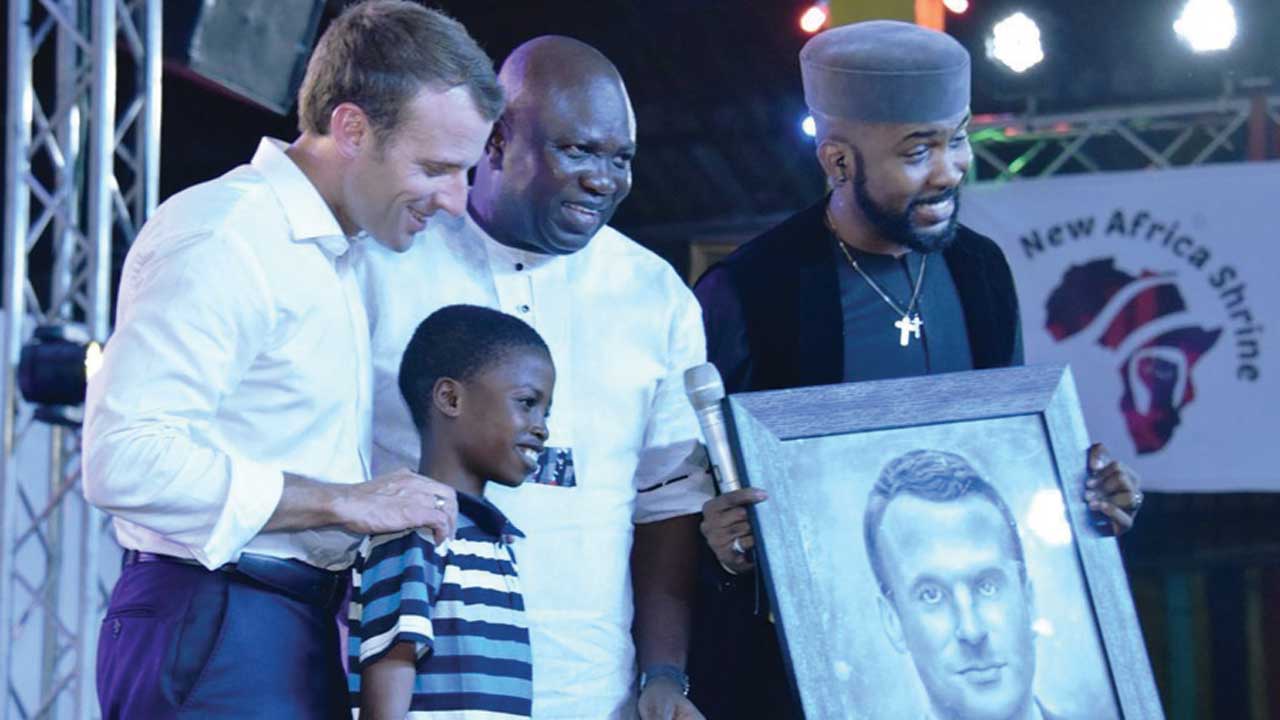 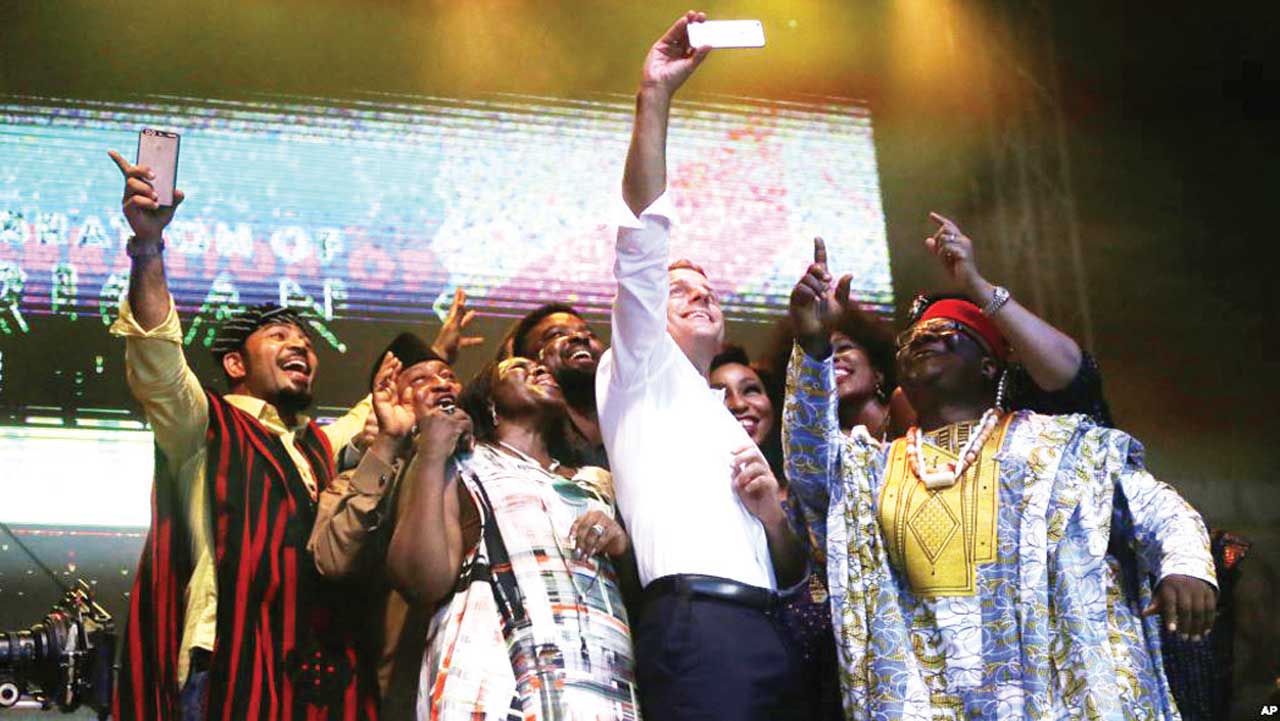 President Macron takes selfie with Nollywood stars at the Shrine 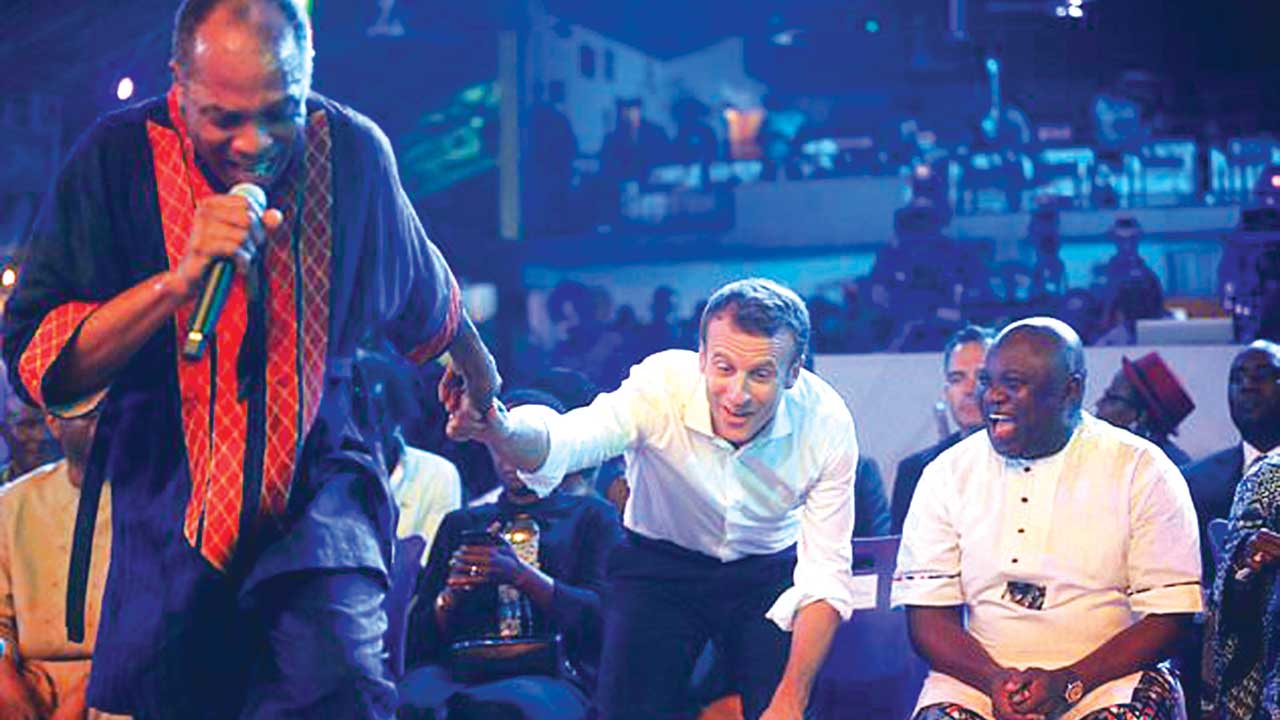 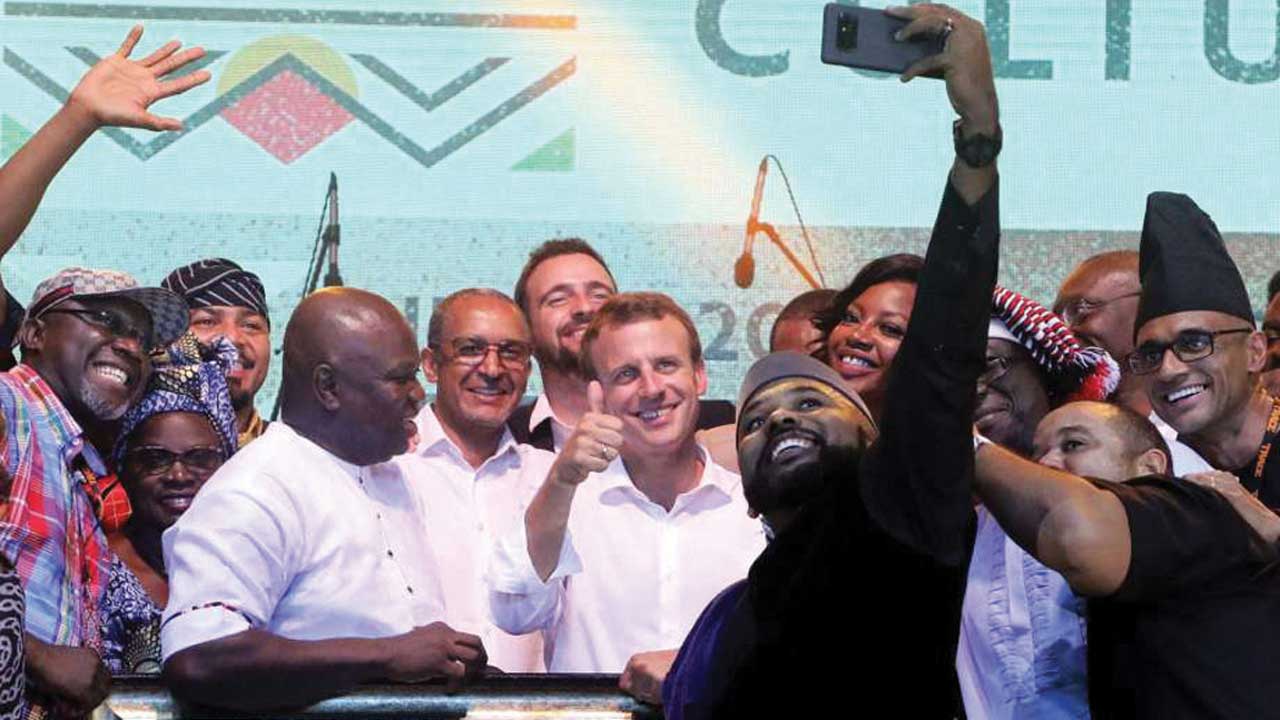 Though late Fela Anikulapo’s children have succeeded in sustaining his legacy through the yearly Felabration, the decision by American superstars such as Jay-Z, Will Smith and Jada Pinkett Smith to commit their wealth into the production of Fela!, a musical about the late Afrobeat pioneer, was an indication that Fela has become a worldwide phenomena.

So, the decision by the French president Emmanuel Macron to visit The New Africa Shrine did not come to many as a surprise. With the exploits of both Femi and Seun Kuti across Europe and America, Afrobeat gospel is fast spreading like a wildfire; Macron is a fan.

To put Lagosians in the mood for the historic visit, Smooth FM, one of the leading radio stations in Lagos, dedicated it’s afternoon belt to Afrobeat, as Fela’s songs ruled the airwaves. In-between, they played songs of Femi and Seun, who have devoted their time to sustaining their father’s legacy.

With full backing of the Lagos State Government, the entire Ikeja axis was heavily guarded by the security agencies, while some of the major streets and roads leading to the Shrine were closed to traffic.

As at 3pm, the entire NERDC Road, Ikeja, was beehive of activities, as guests, including celebrities, top government officials and diplomats, made their way into the Shrine, amid tight security. Aside from men of the Nigerian Police Force, Civil Defence and LASTMA officials, French security agents were also on ground to ensure a hitch free event.

There were also intellectuals like Prof. Wole Soyinka, as well as entertainers, some of who got slots to entertainment the audience. With the ever-dependable DJ Jimmy Jatt in charge of wheels of steel, there was no dull moment. Indeed, it was a celebration of African cultural heritage.

While speaking to the media on the significance of President Macron’s visit to the Shrine, Femi Kuti said, “The way I see it, when you are in the struggle and everything seems bleak, what I see now is a light at the end of the tunnel. I’ve been talking for a while now; imagine if Africa starts to build first class institutions and infrastructures like we see in Europe? For instance, a train that moves from Lagos to Johannesburg at 370 km like I see in Paris, which moves all over Europe; imagine if we have that. Imagine if we make the youths believe again in themselves, in the land and in their culture, then we don’t have the migration crisis anymore; we solve so many problems in this respect.”

He continued: “Like my album One People, One World, we need friends across the world because of technology. But while we are doing that, Africa needs to do his own research and be progressive. Africa now needs to sit on the world table, contributing positively to world development. Africa needs his voice and I see Macron’s visit as the beginning,” he said.

To Femi, President Macron’s visit is a huge plus to the efforts to sustain the legacy of the late Fela.“This is a place that is seen by many to be very anti-establishment with negativity, and he comes here out of all the other institutions in Nigeria? That’s a huge statement. For me, it simply means that the youths of Africa can believe that this is indeed their time,” he said.

On what he has in the offing for the visiting President and guests in terms of performance, the multi instrumentalist said, “Like I do everywhere when I perform, I want the audience to see the beauty of Africa and that given the opportunity, Africa will excel beyond reasonable doubt. I hope he comes here and I think he has been here before while he was in Nigeria because, this building existed then. A lot of diplomats come here and they talk, so, the rumour must be huge that, ‘wow, this building is vibrant.’ This is Africa; the Shrine is Africa! If you want to go anywhere and you want to feel African vibes, the place to be is the Shrine.”

He added: “Macron will never come here if he’s not totally sure of where he’s going to step his foot due to his own legacy as a President. So, for him to come here, I have no doubt that he’s progressive; he will listen to our ideas,” he said.

Though obviously excited about Macron’s visit, Yeni Kuti said, “It takes the French President to bring a lot of Nigerians here. Notwithstanding, I think it’s a fantastic thing; it shows that he respects what Nigerian artistes are doing. For me, I think it’s a great thing for our nation, I mean, it hasn’t happened before,” she said.Having dedicated her life to promoting Fela’s legacy through the yearly Felabration, Macron’s visit, for Yeni, is an indication that indeed, Fela lives on.“Yes, it shows that Fela is still alive because, if he wasn’t alive, Macron won’t be coming here today. I’m a great believer in our ancestors watching over us, including Fela; they are watching us, guiding us. This visit means that we are doing the right thing,” she said.

The long wait came to an end at about 9.30Pm, when news filtered in that President Macron had arrived from Abuja in company of Lagos State Governor Akinwunmi Ambode. The crowd went wild in excitement; he stepped into the Shrine with his entourage, acknowledging cheers from the jubilant crowd, who had waited for hours.

Macron first toured the exhibition area, before Femi, alongside other top management of the Shrine, conducted him round the facility. You needed to see the paparazzi boys, as they struggled for space to catch Macron on their lens; excitement filled the air.“If I just have one message for young people here at the Shrine tonight, I will say yes, politics is important. Yes, be involved. And there’s no advise,” he said, amid cheers from the crowd.Having worked in Abuja as an intern, Macron sure understands and appreciates Nigeria’s rich culture.

On his decision to visit the Shrine, which makes him the first president to have done so, he said, “You are not the one to judge or decide what the important place for African culture is, especially when you are a French President. I do believe that we have to build together a new common narrative and this new common narrative is not based on what is important for Europeans, but what is important for Africa about their culture; how they want to build their culture, how they want to promote their culture and which places are important to them for their culture. Being here is just to recognise that I do respect this view; this place is important to African culture, which is why I’m here,” he noted.

On his agenda for Africa, Macron informed that the French Government will launch the Africa Culture Season, which will hold in the year 2020. The initiative, according to Macron, will feature series of events about African culture and also provide opportunity for African to tell their own story.“It will be for Africa, for African artistes and with the African leaders, business community, influencers and African people. We have appointed an African curator from Senegal and her team of young curators from all these other places in Africa. You will have contemporary artistes; painters and people involved in fashion, movie, visual arts, architecture and all different arts existing in Africa, especially in Nigeria. It will be financed and organised by African businesses,” he said.

On the negative perception of Africa, especially in Europe, Macron said, “I’m not so sure that the image of Africa is always negative, but we are a little bit always paradoxical when we speak about Africa. Some people say, ‘this is a tremendous continent; this is a unique place with young people.’ At the same time, a lot of people say, ‘Africa is a place of terrorism and the origin of migration and so on.’ And probably, these two messages are true at the same time but Africa is just more than that. This is a living, a young continent. When I say, we need a new narrative, I mean, what we need a new generation of artistes, entrepreneurs, people coming from civil society, journalist and intellectuals coming from Africa and speaking about Africa everywhere.”

While thanking the Kuti family for the hosting, he said, “I have a huge debt to Femi Kuti, Fela Kuti, Seun and all the entire family because, the family provided, not just this place, but through different battles of your father, you provided a very strong message; a message that it’s was possible, even now, to decide your won future.”Anchored by Banky W, the event, which lasted into the early hours of the following day, featured performance by the likes of Yemi Alade, Ara and others, while Femi Kuti put icing on the cake with his energetic performance that got everyone dancing.

Transgender Christians In Pakistan Establish Their Own Church
November 30, 2020

4 Reasons You Go For The 'Bad Girls'