By Violet Johnson
Share on Facebook Share on Twitter Share on WhatsApp Share on Telegram
South African musicians and event organisers have objected to Burna Boy's inclusion in the forthcoming anti-xenophobic concert "Africans Unite" concert in the country. In the wake of the attacks in September, the Nigerian Afrobeats artist said he won't set foot in South Africa unless the government "wakes the f*ck up and really performs a miracle".…

South African musicians and event organisers have objected to Burna Boy’s inclusion in the forthcoming anti-xenophobic concert “Africans Unite” concert in the country.

In the wake of the attacks in September, the Nigerian Afrobeats artist said he won’t set foot in South Africa unless the government “wakes the f*ck up and really performs a miracle“.

However, months after the attacks which claimed lives and properties and after Burna Boy’s emotional outburst, it was announced (and confirmed by him) that he would be performing in SA as part of the Africans Unite line-up which hopes to “unify all Africans and speak out against femicide”.

This is receiving a series of backlash as South Africans are not so pleased with him being a part of the concert. Circulating the internet is an open letter written by musicians and organisers under the umbrella of Tshwane Entertainment Collective, to the minister raising objections against the concert and calling for the department to pull its sponsorship of the event. 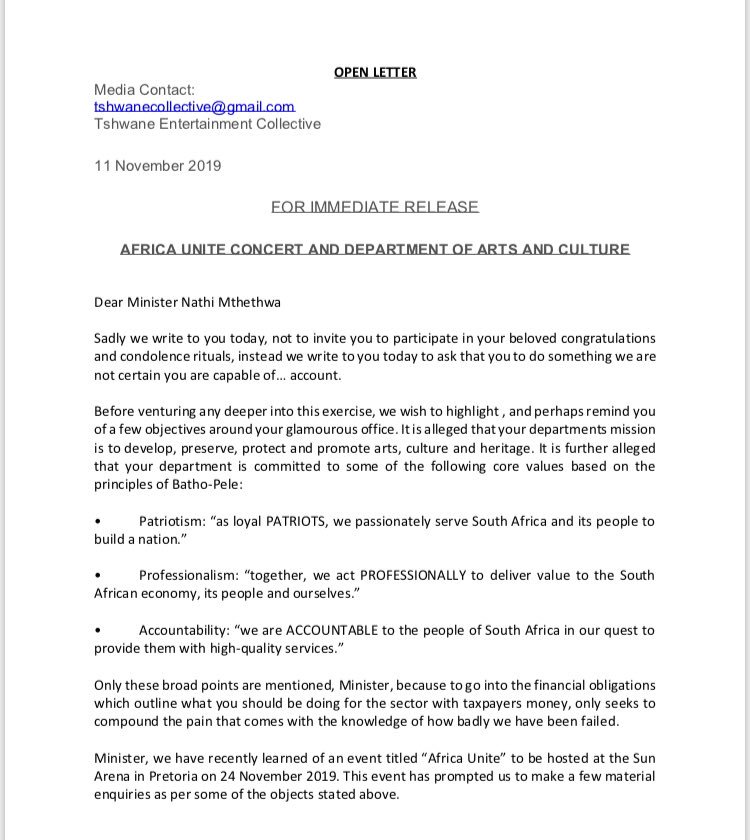 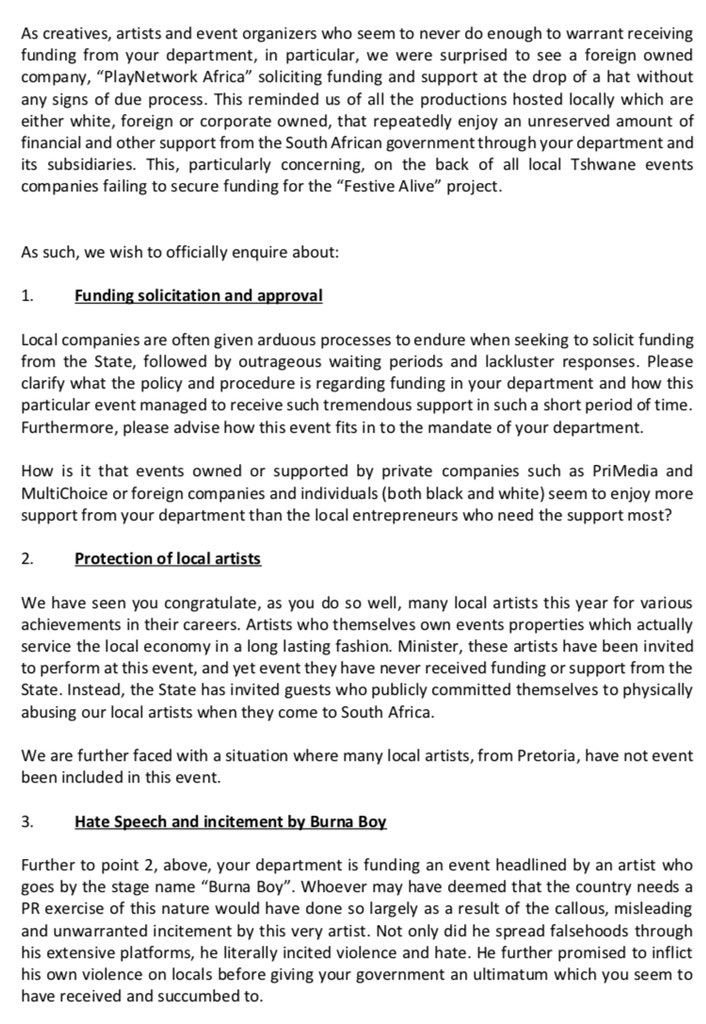 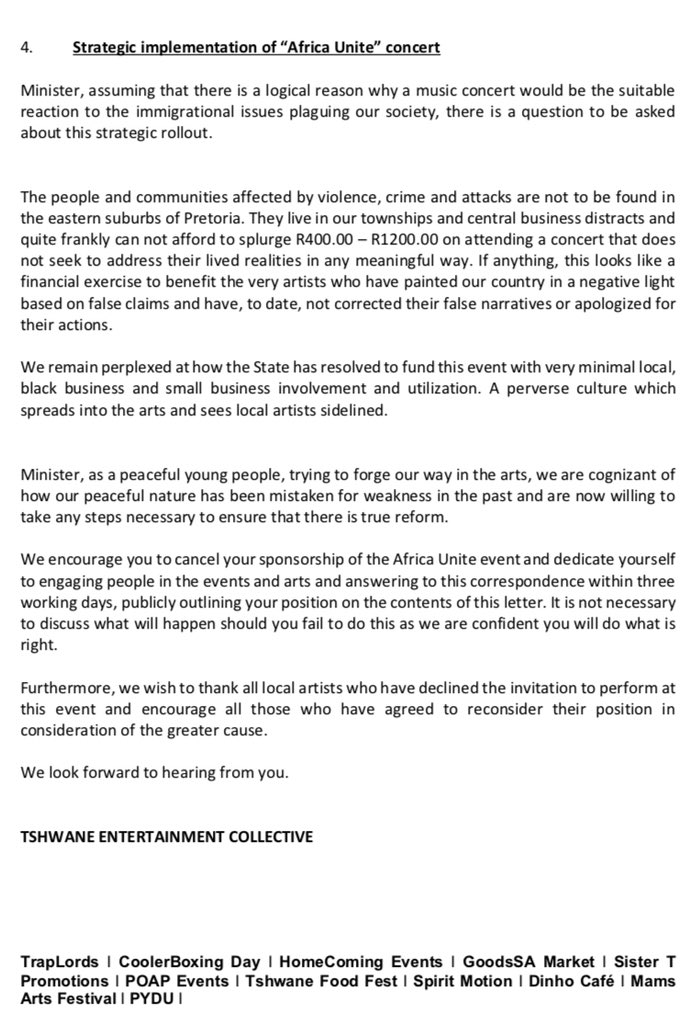 The group questioned the exclusion of artists and event organisers from Tshwane in the process, the lack of financial support for artists from the area, and claims that communities affected by xenophobia are located far from the areas where the concert will be held and cannot afford the ticket prices for the event.

However, it appears the chief concern was against Burna Boy’s inclusion, and the group labelled the event a “financial exercise to benefit the very artists who have our country in a negative light based on false claims”.

“Whoever may have deemed that the country needs a PR exercise of this nature would have done so largely as a result of the callous, misleading and unwarranted incitement by this very artist. Not only did he spread falsehoods through his extensive platform, he literally incited violence and hate,” the letter said of Burna Boy.

The department has however distanced itself from the concert and said that its logo had been used “erroneously” on posters advertising the event.

According to Tshisa Live, spokesperson Asanda Magaqa said: “The Department of Sports, Arts and Culture wishes to dispel the untrue information currently being spread on social media, that it is funding the Africans Unite Concert featuring the artist known as Burna Boy. It is unfortunate that the department’s logo was erroneously used on the poster advertising the event”.

Asanda said that the department had not allocated or granted funding for the event.

“The department wishes to reiterate that it has not allocated or granted any funding to the event in question and any reports to the contrary are entirely false.”

Meanwhile, Burna Boy has announced he will contribute a portion of the proceeds from the concert to the victims of xenophobic attacks.

What's New
The Daily Show Host Trevor Noah Has Announced His Leave
10 hours ago
Late-night programming will miss Trevor Noah greatly. During a Sept. 29 showtaping, the 38-year-old comic announced his intention to leave his position as host of Comedy Central's The Daily Show after seven seasons. He said, "I realized that after the seven years, my time is up," he revealed to a shocked studio audience. "But in…

Food
Easy El Salvador Pupusa Recipe To Try Out
1 day ago
When it comes to food, you do not necessarily have to be from the location of where these foods are from and that is why exploring foods is great fun. This brings us to trying out a basic pupusa recipe known to the people of El Salvador.This dish can be gotten from locals too. El…

What's New
Incarcerated Singer R. Kelly Is Mandated To Compensate Victims
1 day ago
The multi-platinum R&B singer Kelly, who has been found guilty of sex crimes twice this year, will have to pay at least $300,000 in reparations to some of his victims, a federal judge said. U.S. District Judge Ann Donnelly stated during a hearing in Brooklyn that the money will reimburse two women, going by the…

What's New
Gangsta's Paradise Crooner Coolio Passes On At 59
1 day ago
The Grammy-winning rapper Coolio passed away on Wednesday after being discovered unconscious at a friend's Los Angeles residence, according to the New York Times. He was 59. The single "Gangsta's Paradise," from the 1995 album of the same name, is what made Coolio, real name Artis Leon Ivey Jr., famous. The next year, that song,…

Music
AKA Ends Long Term Beef With Burna Boy
1 day ago
The Award-winning South African rap mogul AKA has now reconciled and ended beef with the Nigerian Big star, Burna Boy. After a brief Interview with some SA music artist portals, We have decided to bring you all the things you might have missed earlier about the Beef. Read Carefully below. In July 2019, the rapper…

Music
Maye: Music Flows In My Veins
2 days ago
It is not everytime you stumble on someone whose music knowledge spans different genres. Maye, a music producer and now, artiste, speaks to Guardian Life about what makes his debut single "Catch Cold" unique and the inspiration behind his music. 1)    When describing your music, one word that comes to mind is versatility. From Afrobeats…

Music
Burna Boy's "It's Plenty" Video Will Make You Love Him More
2 days ago
Iconic singer, songwriter, performer and Afrofusion poster-boy, Burna Boy, releases another hard-hitting video for one of the most captivating singles from his sixth studio album "Love, Damini" — his instant hit street anthem, 'It's Plenty'. Directed by Troy Roscoe, these visuals are a chronicle of the Afrofusion pioneer's career highlights and a personal testimony to…

What's New
Ayra Starr And Kelly Rowland Collaborate On New "Bloody Samaritan" Remix
2 days ago
Ayra Starr, the Mavin princess, collaborated with Kelly Rowland to remix her track "Bloody Samaritan." From Ayra Starr's debut album, "19 & Dangerous," the first version, which was published in 2021, served as the first single. After Ghanaian-American novelist Larry Ossei-Mensah suggested that the two vocalists work together on the song in January, the duo…

Film
The Brotherhood in the cinemas across Africa
4 days ago
The much-anticipated crime-action blockbuster, Brotherhood, a movie based on two brothers (twin) being on opposite sides of the law – the police force and a notorious gang of robbers

Film
Firm rewards most innovative looks at Brotherhood Ojuju ball with N2million
4 days ago
As part of activities for the premiere of the much-anticipated crime-action blockbuster, Brotherhood, Africa’s leading experiential and activations company, Riquesa Africa, celebrated the best-dressed celebrities with N2 million.

Culture
The Historical Story That Birth The Famous Film "The Woman King"
14 Sep
The recently released film "The Woman King" is a film built on the historical tale of the African kingdom of Dahomey in the 1800s. Its remains can be found in present-day Benin. The film chronicles the historical tale of a troop of all-female warriors known as the Agojie/Agoji; who possess abilities and ferocity unmatched by…

Saturday Magazine
Celebrities who enlivened 2021 with stunning outfits
1 Jan
As expected, the world of fashion evolved further in 2021 with celebrities from all walks of life, at different events, elegantly exhibiting stunning outfits made by their designers

Guardian Woman
Zainab Alatise: I use my platform to educate people on the importance of herbs
1 Jan
Herbs have many practical uses and because of this, they are highly favoured by many. Herbs are usually small plants used for culinary and medicinal purposes although there are some herbs

Guardian Woman
Let’s start the year as we mean to go on
1 Jan
After Dirty December and New Year’s celebrations, the first day of January, in fact, the rest of the month, can feel a bit dreary.