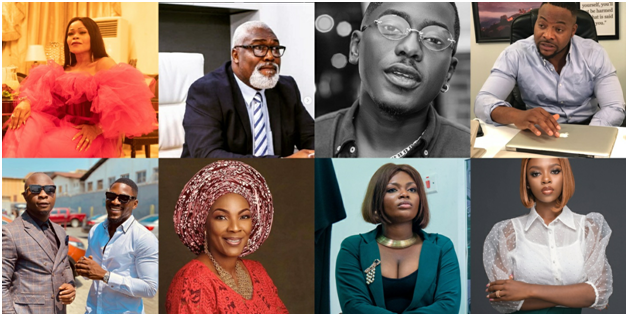 The star-studded movie features an amazing cast comprised of some of the premier names in the African movie industry like Gbenga Titiloye, Shaffy Bello, Bolanle Ninalowo, Tina Mba, Fehintola Olukotun, Timini Egbuson, Mc Lively, Tobi Bakre, Diane, Cute Abiola & more. Here are the highlights of the wonderful time we had on the set and making of Breaking Point the Movie;

The Amazing Cast
One can say the Casting team did a fantastic job as every actor picked, suited the roles they were given perfectly which made for a smooth interpretation of the robust characters to be played in the movie. With over 12 A-list Actors, it was a seamless interpretation of roles and a very enjoyable working experience all round. 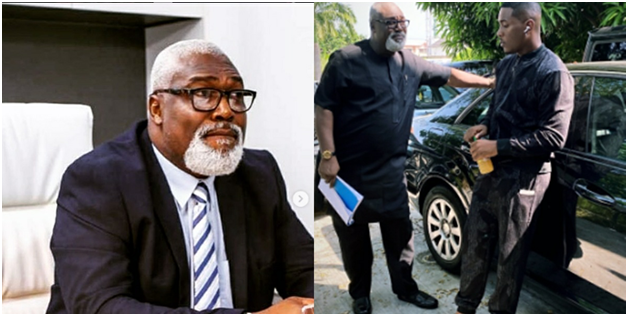 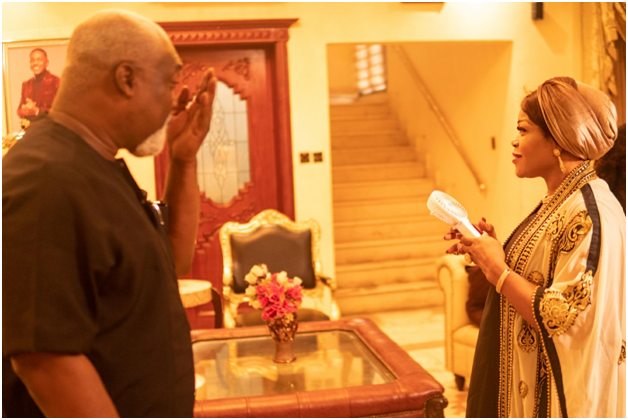 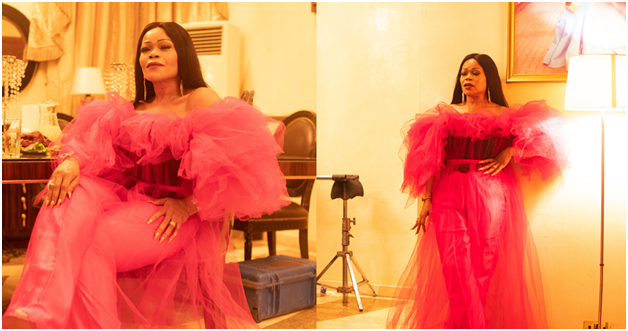 Following the success of Elevator Baby, Shaffy Bello & Timini are beginning to become the preferred mother and son duo of Nollywood and they once again created their magic on set and delivered an award-winning performance.

Locations and Props
As we all know, beautiful places make even more beautiful pictures and the stellar job done by the location and props crew would have one amazed at the attention to detail and the portraying of Lagos as a world-class city befitting of the opulent lifestyle of the characters in the movie.

Story is Superb
The story is relatable in today’s contemporary society – We saw how a young lady had a mindset of sacrificing all it takes and absorbing the pains and abuses of her relationship to the reward of marrying from a wealthier class based on her mother’s continued reminders that wealth is the only source of marital happiness.

Another great element to this movie is the entertainment meets tech aspect which encourages the vastly growing number of African youths who are striving to be leaders and innovators to continue in the pursuit of creativity, self-determination and personal discovery.
This movie embodies the major elements of the average personal life of people today; Business rivalry, Love, Hatred, Glamour and Parenting.

Use of Lighting
Going by the unmatched pedigree of the direction team Adams GUD & Oke Abiola, there is no doubt that the standard of lighting is world-class. The Ace directors worked closely with other technical crew members to ensure the best quality for your viewing pleasure.

Tobi Bakre and Diane Russet, Shot to limelight After their stint at the BigBrother reality show in 2018 & 2019 respectively. Also, popular Instagram comedian MC Lively who played Derek Shonde – The tech Geek couldn’t thrill us less with his comic facial expressions and marvellous interpretation of his role.

Official Nollywood Debut
Breaking Point the movie is also set to debut another shooting Star in the person of Fehintola Olukotun as the Female lead alongside Ninalowo Bolanle.

This is geared to be the second mega Debut this year, as Living in Bondage successfully Introduced a new face, Nnamdi Okeke who had an outstanding performance in the second sequel.

Fehintola Olukotun played Kemi Akintola and her talent, professionalism, amicable nature and hardworking spirit show that “she is here to stay” and will be a formidable force in the industry for years to come.

The Quality of Pictures
We painstakingly sourced some of the best equipment in the world of image capturing, movie production and editing so as to create the crispest, clear and aesthetically pleasing picture experience for our befitting audience.

Plot Twist
The plot twist in this movie is unprecedented, as we see an impressive depiction of previously nonchalant Timini Egbuson become a business and techy personality with an innovative app with the help of his friend in the agricultural sector. The twist also saw a happy-go-lucky Kemi Akintola devolving into a psychotic rage due to an unexpected twist of fate.

Costuming & Make up
Sodiq Ayinde & Adella did a great job in putting up stylish, glamorous and appropriate looks for all actors for the duration of production – Adella is known for her beautiful painting in King of Boys pictures.

However speaking with CEO of Vidi360, Ifedayo Oniyide expresses his gratitude towards the Actors and crew member stating that “the actors never stopped amazing me, aside the fact that I have a personal relationship with most of them, they were able to give us a professional delivery which is one of our core beliefs at our firm. Their level of humility and the courteous interactions between our crew members, actors and executives onset and even after, has been amazing so far” I believe we have had a satisfying and amazing production and we cant wait to share the visuals with everyone.

Recall that Ifedayo Oniyide was formerly the man behind Mavin Records media and promotions wheel.

Love and Relationships
Getting Over Breakfast: How To Be Better And Not Bitter After A Heartbreak
3 hours ago
You have got you nails done for the new year. It wasn’t in the spirit of "new year, new me". Far from it. It was a product of sheer curiosity. Your best friend gets the most amazing nail designs and after a long drought of intense longing, you took the plunge and decided to get…

Travel and Places
Top Food Museums To Visit Around The World
6 hours ago
Food, food, food... we all love food. Food permeates into our culture and way of life. Aside from the usual communication with food, which begins with the eyes, nose, mouth and stomach, it is textualised into art to the point foods are housed as art forms in museums.​ Food museums are institutions that showcase the…

Spotlight
Dike Chukwumerije: Quest For Identity, Social Consciousness In Spoken Word
8 hours ago
Dike Chukwumerije is a famed poet and writer who uses the stage to present his art in spoken words. Being one of Nigeria’s prolific performance poets, his public remarks and poems have inspired discussions about nationalism and identity across the nation. He speaks with Guardian Life about life and work. Kindly tell us about yourself…

Music
Kelechief… Hip Hop Star Soars From Atlanta To Lagos
1 day ago
Kelechi Emeonye is not your average American-born Nigerian maverick spewing witty bars for public appeal. At the core of the young rapper, professionally known as Kelechief, is a resilient maestro using his music as a bridge to connect Africans from the homeland to the diaspora.

Music
10 Best African Music Albums That Are Still Topping Chart From 2020 to 2023
2 days ago
Every music genre has its share of iconic albums that are cherished and seared into fans' minds. With African music, there have been a lot of great African albums in recent years that still top the charts all over Africa. These albums usually hold a special place in the hearts of fans, many of whom look back in awe at what African music has achieved since the genre's inception.

What's New
DJ Neptune Drops A New Single 'Bienvenue' Featuring Ruger
4 days ago
DJ Neptune has dropped a new single titled 'Bienvenue' featuring Ruger. DJ Neptune taps Ruger for a new thrilling single Bienvenue' which comes through with a crisp tune produced by DJ Neptune, Kukbeatz and Choke Boi. The new year is off to a bang with "Bienvenue," a brand-new classic song from DJ Neptune and also…

Music
AfroAlte music sensation Buchidavidss shaking up Nigerian soundscape
30 Jan
First, it sounded strange like a new song without lyrics, but it eventually turned out as absolute ingenuity by Nigerian music sensation, Nwadavid Chibuchi, fondly known as Buchidavidss, who does fusion of afrobeats and alternative music he coined as ‘Afroalte’. Buchidavidss is an extraordinarily talented artiste, who has caught attention on both local and international…

World
Griner heads home after release from Russia in prisoner swap
9 Dec
American basketball star Brittney Griner was headed back to the United States on Friday after being released from a Russian prison in exchange for an arms dealer known as the "Merchant of Death." Griner, 32, who was arrested in Russia in February on drug charges, and Viktor Bout, 55, who was serving a 25-year sentence…

Sport
The road to ‘West Africa 2034’
10 Dec
On Thursday, December 15, 2022, the world will take a short breather away from the FIFA World Cup in Qatar. During this break, a small gathering of eggheads from very diverse backgrounds but with a common cause somehow related to the World Cup...

Personality
‘We aim at creating a space where Nigerian artistes can tell their stories and be heard’
10 Dec
Temilayo Osude is a lawyer with experience in commercial law and statutory compliance. With a diploma in Security Studies, she brings to bear a wealth of experience in her role as Managing Partner at RBMM Solicitors