By Ernest Nzor, Abuja
Share on Facebook Share on Twitter Share on WhatsApp Share on Telegram
... says Nigerians have chosen LP candidate as their next president ... insists status quo must give way Supporters of the presidential candidate of the Labour Party (LP), Mr Peter Obi, on Saturday, assured him of 25% constitutional requirement votes in at least twenty-four states of the federation in the 2023 election. The assurance was…
1 of 10 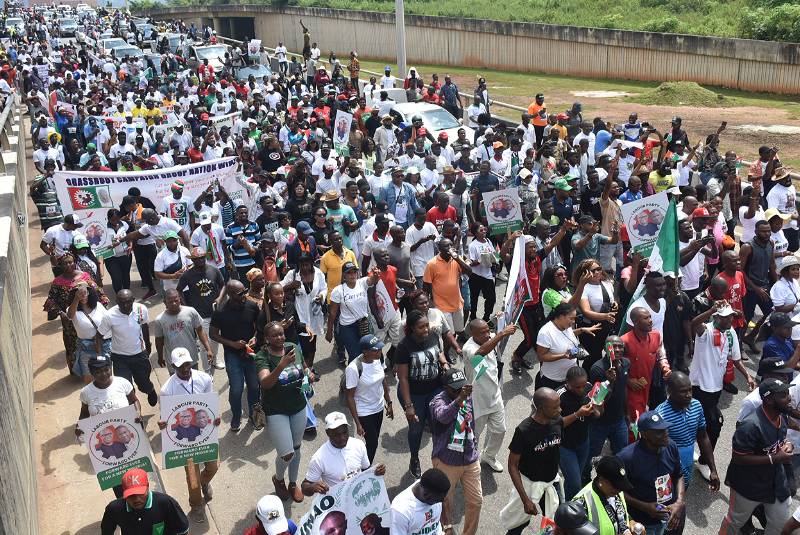 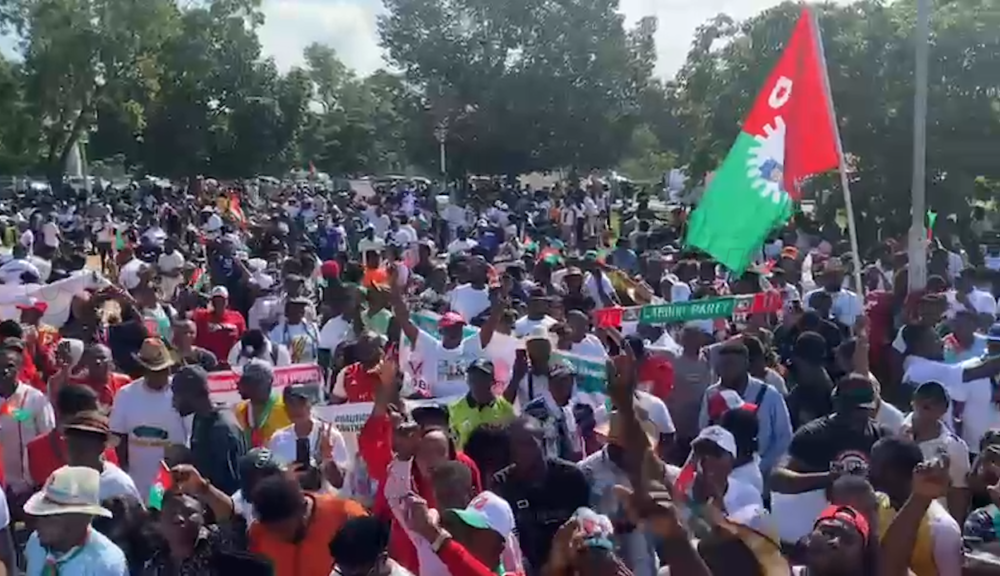 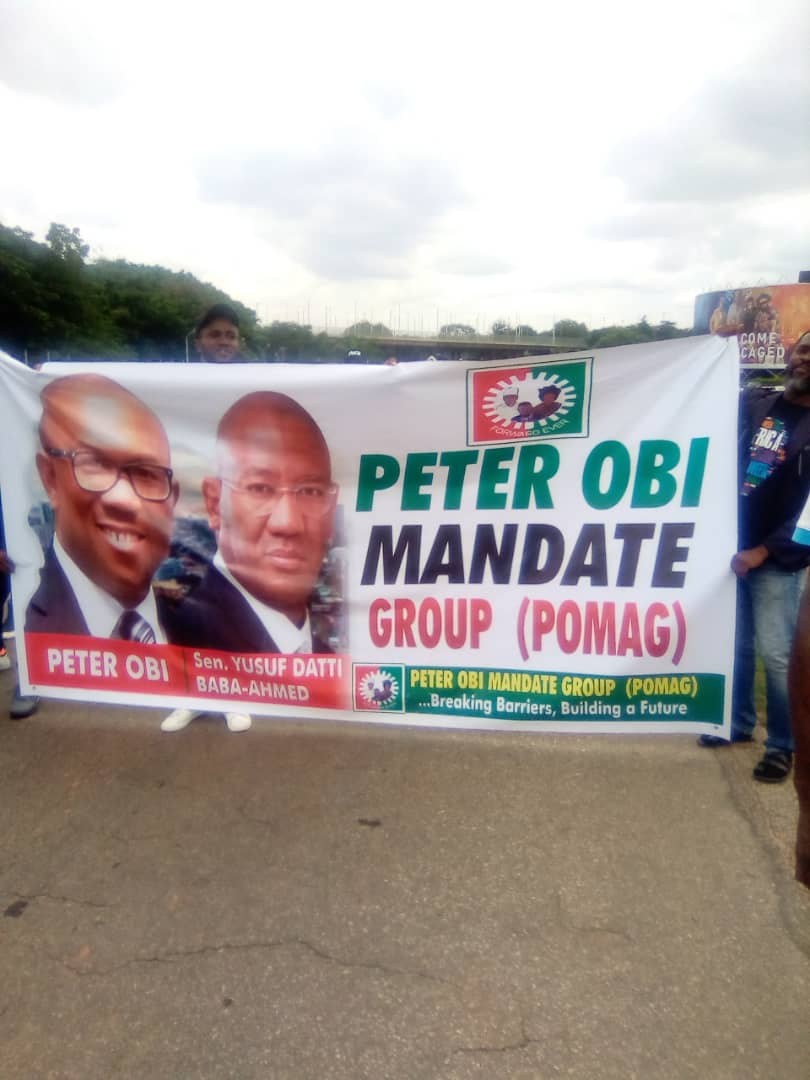 … insists status quo must give way

Supporters of the presidential candidate of the Labour Party (LP), Mr Peter Obi, on Saturday, assured him of 25% constitutional requirement votes in at least twenty-four states of the federation in the 2023 election.

The assurance was given by the Conference of Peter Obi Grassroots Ambassadors, in response to ongoing propaganda designed to weaken the chances of the people’s choice for a New Nigeria.

Recall that poll, commissioned by Anap Foundation and conducted by NOI Polls Limited, had placed Peter Obi of the Labour Party (LP) as the winner of the 2023 presidential race with 21 percent of votes, beating Ahmed Bola Tinubu of the All Progressives Congress (APC), as well as Atiku Abubakar of the Peoples Democratic Party (PDP), in that order.

Also, a statement by the ANAP foundation announcing the result of the poll shows the result, however, showed that about 33 per cent of the respondents were undecided while another 15 per cent refused to disclose who they would vote for; an indication that Mr Obi’s lead, according to the poll, is surmountable.

“Mr Peter Obi’s 8 percentage point lead at this early stage is significant, but not sufficient to separate him completely from a leading pack of candidates scoring 21 per cent, 13 per cent and 13 per cent respectively”.

In its immediate reaction to the counter poll, the group warned against attempts to deploy propaganda as a tool to de-market Obi, former Governor of Anambra State.

While reacting, the group in a statement signed by its National Coordinator, Rt Hon. Hassan Usman Algungu, National Secretary, Dr Gabriel Ayodeji and Director of Women Mobilisation, as well as Hajiya Nana Tukur, said: “It has gotten to our notice of lies being peddled by some unscrupulous elements paid to install uncertainty, fear and discouragement targeted at misleading the general public by alleging that it is impossible for our leader Mr Peter Obi to secure 25% votes in at least two-four of states, as enshrined in the Constitution.

“For us, this amounts to the blatant lie told in the public domain by the same people who know the truth in their hearts of hearts that of the three top contenders, Mr Peter Obi has better chances of winning in more states over and above his counterparts.

“If the sole aim of this propaganda is not pure mischief and an attempt to swindle the public, since this is a political contest targeted at producing a single winner; wouldn’t it have been wiser to rather keep mute knowing your opponent is on a lane of failure?

“Peter Obi has really set the establishment off balance and they know he is closer to victory than them all. Hence, the resolve to resort to lies. We are very confident of his victory because we have done our homework and the result have started trickling in soon it will be very obvious to even the blind that the narrative of ‘structure” and another campaign of calumny have now been overtaken by events.

“Labour Party structure is growing stronger by the day and even at that with other arrangements we’ve put on the ground the party’s effort is but a bonus”.

The group noted that they have deliberately and strategically set up committed foot soldiers across every nook and cranny of Nigeria including the Northern part of the country comprising men and women of capacity, capable of delivering.

“Peter Obi as it stands now will comfortably secure more than the 25% constitutional requirement in 14 states out of the 19 states that formed the northern part of Nigeria while we have the 5 remaining states in the North under steady reinforcement. With God on our side, we shall demystify the mystery responsible for Bad Governance in Nigeria in 2023.

“To the teaming responsible members of our society and supporters of the OBIdient movement and labour party, we urge you to remain steadfast and resolute in your support for Peter Obi and the new Nigeria project as he remains the only candidate with clear programs and implementation templates to take Nigeria out of this quagmire”.

Nigeria
Tambari TV appoints journalist MD/Chief Operating Officer
2 mins ago
The board of Amasis Broadcasting Services Ltd, owners of Tambarin Hausa Television has appointed Ibrahim Shawai as its new Managing Director/Chief Operating Officer.
Nigeria
Nigeria limits cash withdrawals to curb counterfeits, ransom demands
24 mins ago
Nigeria's central bank has imposed restrictions on weekly cash withdrawals to limit the use of cash in a bid to curb counterfeiting and discourage ransom payments to kidnappers. Under a new policy announced late Tuesday, the Central Bank of Nigeria (CBN) said that weekly cash withdrawals had been slashed to 100,000 naira ($225) from 2.5…
Sport
Belgium star Hazard quits international football
39 mins ago
Belgium star Eden Hazard announced his retirement from international football on Wednesday, days after the team crashed out of the World Cup in the group stage.
Nigeria
FG, Saudi Centre donates relief items to IDPs, flood victims in Borno
57 mins ago
The Federal Government in collaboration with the Saudi Arabian Releif Centre on Tuesday donated relief materials to Internally Displaced Persons (IDPs) and flood victims in Borno.
Nigeria
FG recovers over N120bn from proceeds of crime – Lai Mohammed
1 hour ago
The Federal Government on Wednesday announced the recovery of over N120 billion, among other currencies, through the Proceeds of Crime (Recovery and Management) Law (POCA), 2022.

Opinion
It’s New Year’s day
1 Jan
The onset of a new year is customarily the time to dream new dreams and hope new hopes. It is also the opportune moment for individuals, groups and nations to take a critical look

Nigeria
More services to require NIN for identification as deadline shifts to March 31
1 Jan
To further cover remote areas, diaspora, schools, hospitals and others, the Federal Government (FG) has shifted the NIN-SIM verification deadline from yesterday (December 31, 2021) to March 31, 2022.