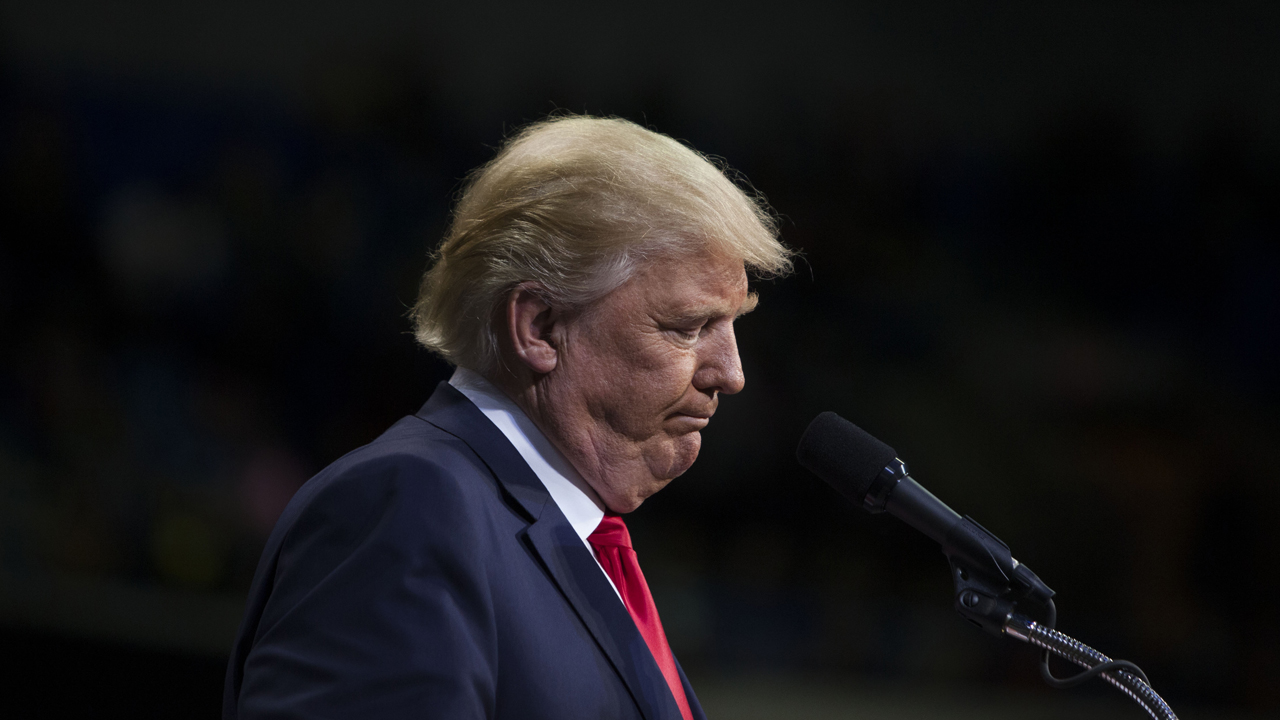 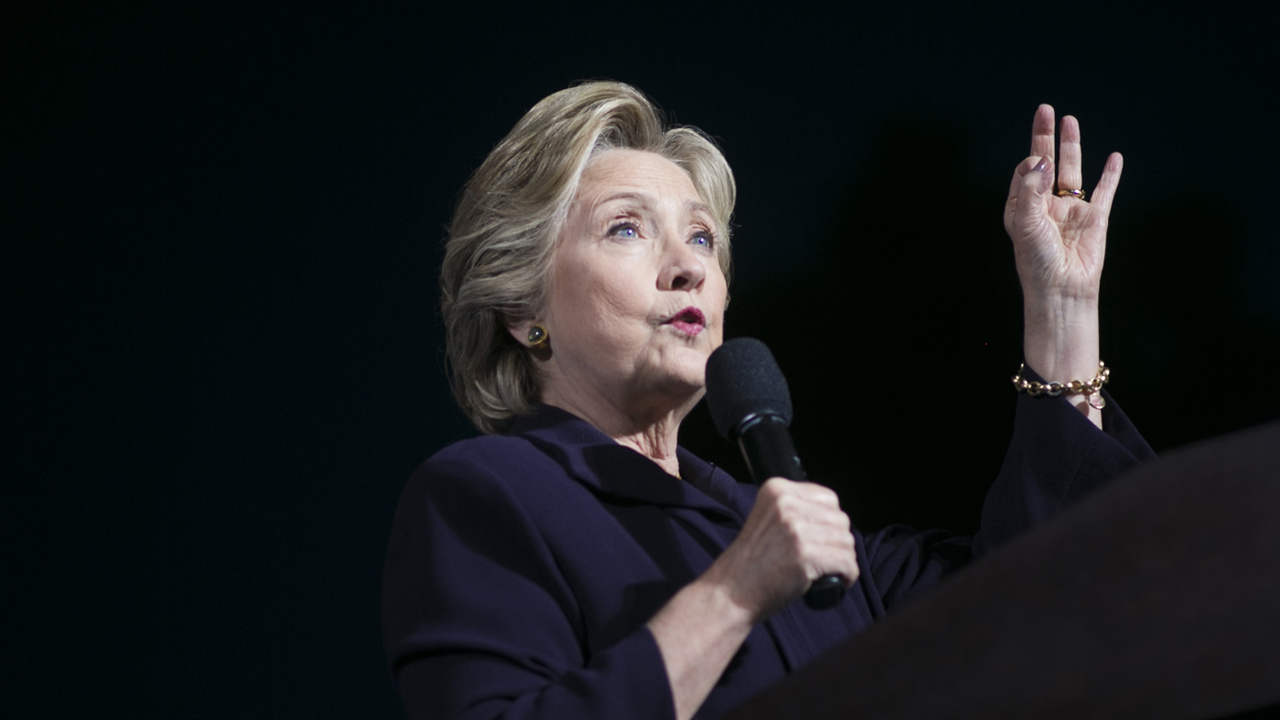 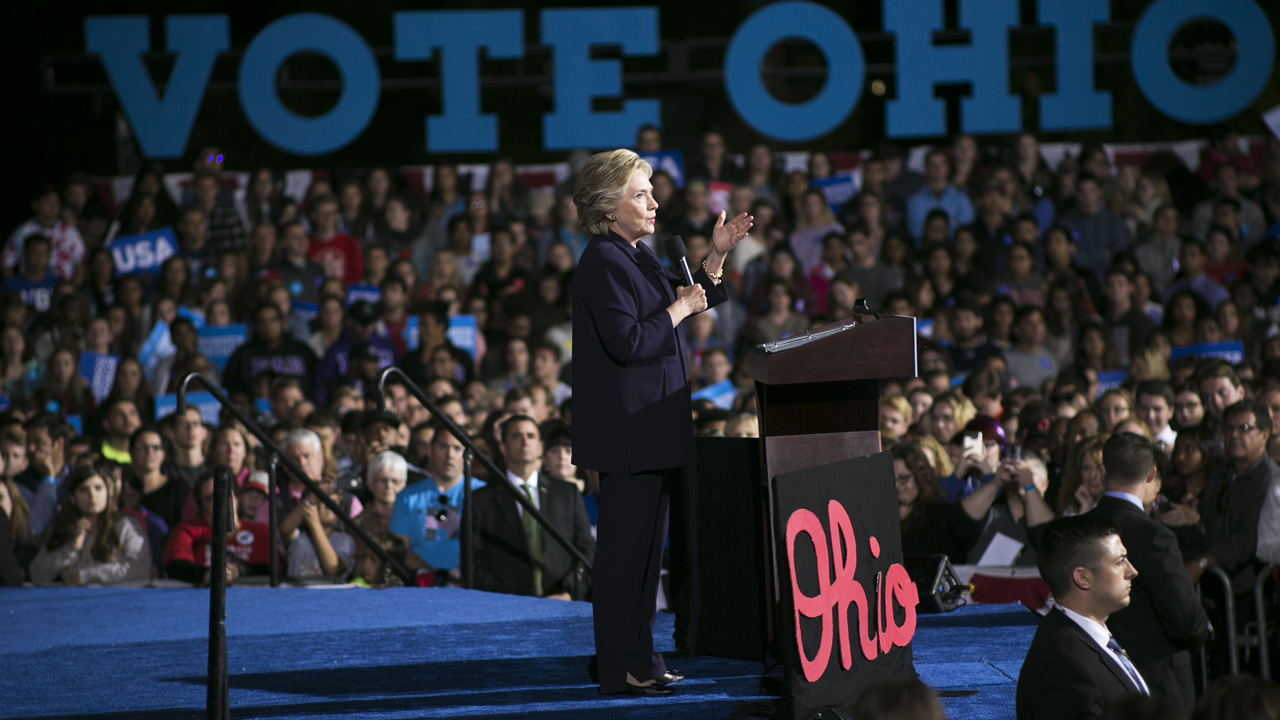 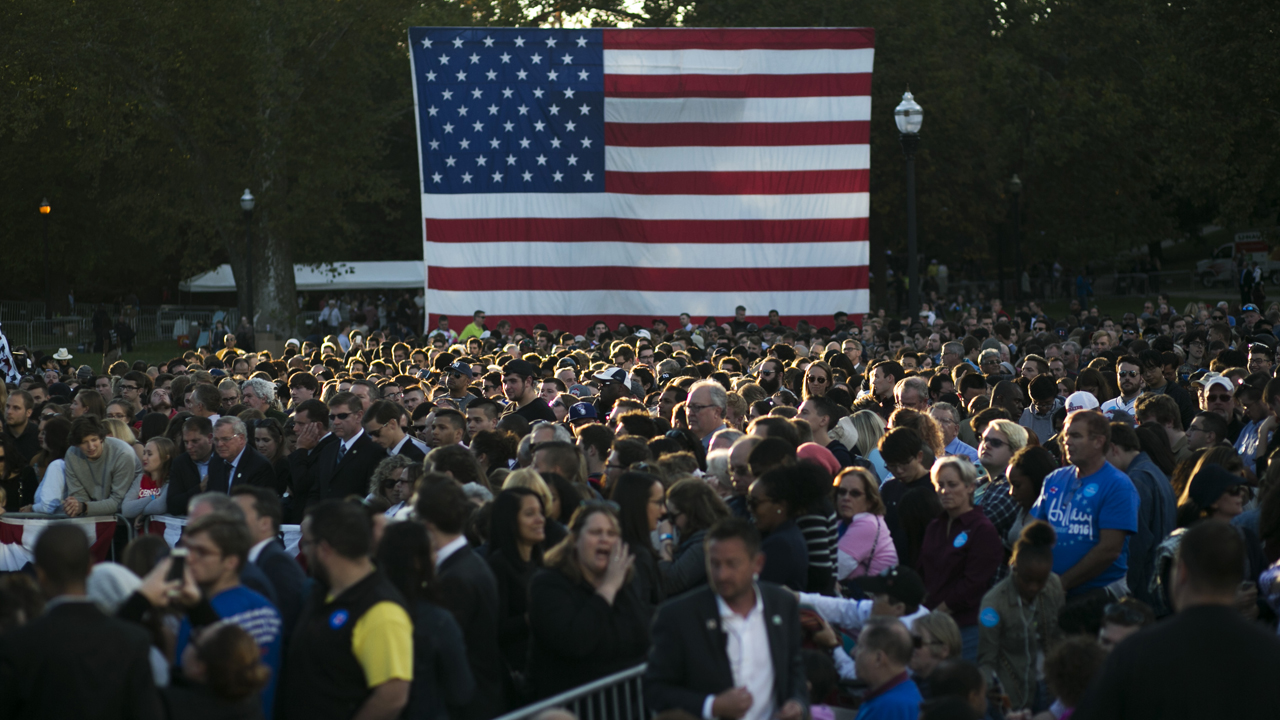 The former secretary of state looking to make history as America’s first woman commander-in-chief held an evening rally at Ohio State University ahead of the state’s deadline to register to vote Tuesday.

The turnout marked a record for her campaign, with Trump teetering on the precipice after damaging revelations of his lewd comments about women.

The Clinton camp estimated the size of the crowd at 18,500, including 5,000 outside the perimeter. An AFP reporter said the number at more than 10,000.

The Democrat tried repeatedly to get under her Republican opponent’s skin, mocking his television career.

“On the day that I was in the Situation Room watching the raid that brought Osama bin Laden to justice, he was hosting ‘Celebrity Apprentice,'” she said, a day after the two candidates held their second presidential debate watched by an estimated 66.5 million people.

“So if you want to talk about we’ve been doing the last 30 years: Bring. It. On,” added Clinton.

The Democrat, who has struggled to energize young voters, focused her speech on youth turnout, repeatedly stressing the stakes of the November 8 election, just four weeks away.

“This is turning the clock back not just a few years but centuries. The only way to rebuke this is to vote,” she repeated.

Her rival’s candidacy suffered a crippling blow after the 2005 tape was released Friday in which he claimed he could grab women by the crotch with impunity because, as a celebrity, “you can do anything.”

– Limping –
The fallout saw a wave of Republican lawmakers abandon him, including some who have urged him to step aside.

A new NBC News/Wall Street Journal poll, conducted after the video was released but before Sunday’s debate, showed Clinton with an 11-point lead in a four-way election — 46 percent to 35 percent — and a 14-point lead in a head-to-head matchup.

“I may be limping across that finish line, but we’re going to get across,” conceded Trump at a rally in Wilkes-Barre in the crunch state of Pennsylvania, for once conceding the scale of the fight before him.

He promised to make six campaign stops a day in the final week before the election, insisting there was still a path to victory and urging his core supporters to come out and vote on November 8.

“We have to make sure this election is stolen from us and not taken away from us,” he said.

It was the customary rock-star reception for the Republican nominee at the Mohegan Sun Arena in Wilkes-Barre, which has a maximum capacity of 10,000 and which was close to — but not entirely — full.

“Without the media, Hillary Clinton couldn’t be elected dog catcher,” said Trump, calling US television network CNN “a disgrace.” CNN host Anderson Cooper was one of the two moderators at Sunday’s debate.

At one point, Trump picked up a toddler dressed as a mini-Trump in a grey suit, red tie and white shirt, with blond hair.

“Trump,” replied the child into the microphone to laughs when the Republican candidate asked whether the boy wanted to go back to his parents or stay with the nominee, before he handed him back over.

– Trump threatens Clintons –
But as he promised to bring back jobs, end illegal immigration, renegotiate trade deals and reduce taxes, one man shouted “how are you going to do it?” and turned his head away in disgust.

Faced with the tape scandal, House Speaker Paul Ryan told fellow Republican lawmakers that he could no longer “defend” Trump, and that the priority now was maintaining the party’s control of Congress.

“You all need to do what’s best for you in your district,” he said, effectively giving cover to lawmakers considering severing ties with the controversial GOP flagbearer.

Sunday’s town hall-style debate was a study in heated personal attacks and a stark reminder of the divisiveness of the 2016 race.

In a room that included Bill Clinton and three women who have accused the former president of sexual misconduct, Trump threatened to jail his rival and lobbed incendiary allegations against her husband.

The 70-year-old real estate mogul apologized for “locker room talk,” but accused Bill Clinton of being “abusive to women.”

On Monday, Trump doubled down on a pledge to investigate his rival if he wins, despite the suggestion being roundly denounced.

“If they want to release more tapes… we’ll continue to talk about Bill and Hillary doing inappropriate things.”

News
World unions report 'record' level of labour abuses
47 mins ago
Workers faced record abuse of their labour rights in the past year, from union bans to violence and murder, the International Trade Union Confederation said on Tuesday.
World
Scotland sets October 2023 for new independence vote
58 mins ago
Scotland's government on Tuesday drew the battle lines for a legal and political tussle with London as it announced plans to hold a second independence referendum on October 19, 2023.
World
EU watchdog reviews smallpox jab for monkeypox
1 hour ago
The European Union's drug regulator said on Tuesday it had started formally reviewing the use of a smallpox vaccine to treat a growing number of cases of monkeypox. Imvanex was authorised by the European Medicines Agency (EMA) in 2013 for smallpox, but its maker, Danish firm Bavarian Nordic, did not apply at the time for…
Nigeria
Nigerian gay seeking asylum faces deportation from UK
1 hour ago
Nigerian gay seeking asylum in the United Kingdom (UK) is among persons that are facing imminent deportation to their home countries. The Guardian UK reported that mothers and grandmothers, some of whom have lived in the UK for decades, are among those facing deportation to Nigeria and Ghana on a controversial Home Office charter flight…
Nigeria
NASS will amend electoral act to remedy weaknesses, says Lawan
2 hours ago
Senate President Ahmad Lawan has said that efforts will be made by the National Assembly to amend the electoral act to serve as a safeguard against weaknesses identified in the law.

World
China hits out at criticism over Xinjiang, Tibet and Hong Kong
21 Dec 2021
China blacklisted four members of a US federal commission on religious freedom on Tuesday in the latest tit-for-tat response to Washington's own sanctions targeting alleged perpetrators of "genocide" in Xinjiang.

World
Biden says a Trump candidacy would motivate second term run
23 Dec 2021
Though he isn't even a year into his first term, US President Joe Biden says one factor could help convince him to run again in 2024: a rematch against 2020 rival Donald Trump.

World
Trumpism without Trump: the Republican playbook for 2022?
27 Dec 2021
As US Republicans cheered impressive gains in state elections in the fall, their leader may not have been so delighted

World
20 years on, dreams of euro rivalling dollar persist
28 Dec 2021
When 12 countries adopted the euro two decades ago, French president Jacques Chirac hailed a Europe that was "affirming its identity and its power".