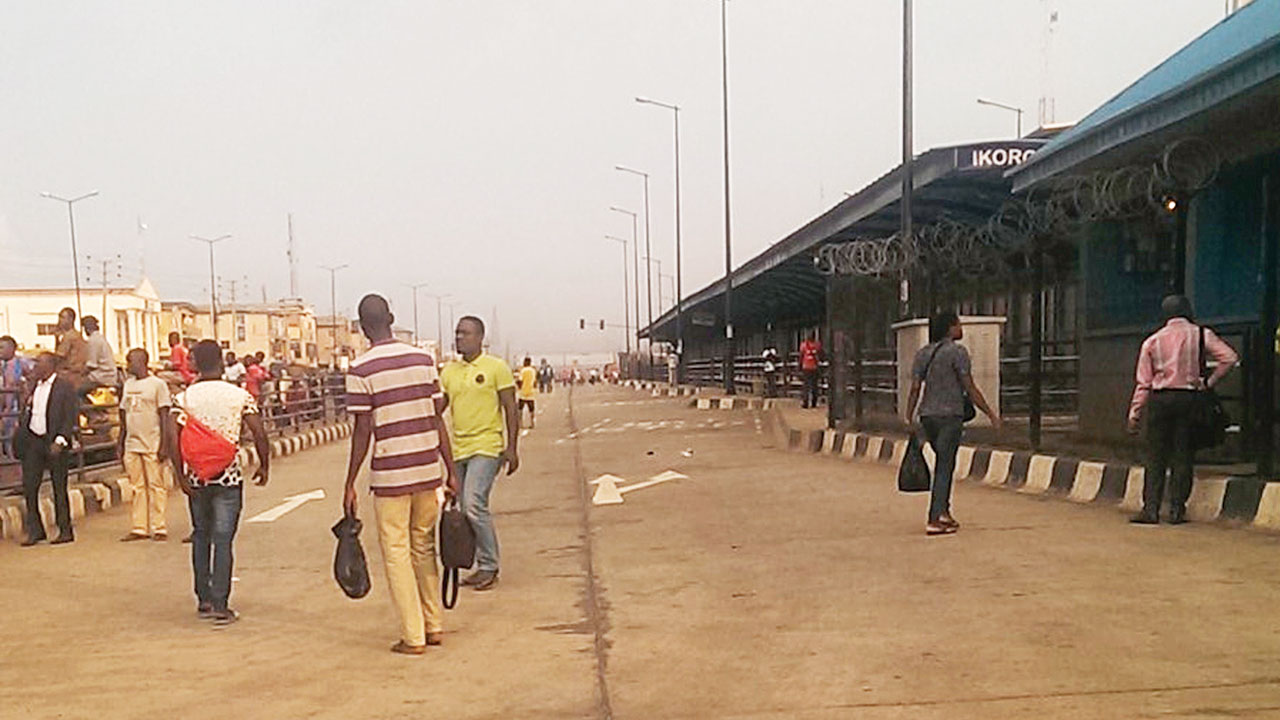 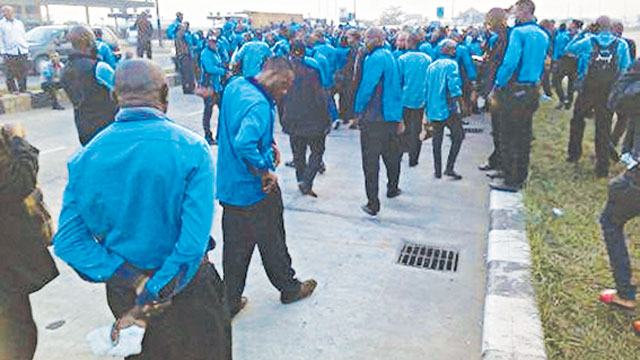 Protesting drivers at the depot in Ikorodu, Lagos.
Commuters in Lagos yesterday groaned as drivers of the Lagos State’s Bus Rapid Transport (BRT) downed tools over alleged delay of their salary.

Some of the drivers told the News Agency of Nigeria (NAN) that they were protesting against delayed salary payment, alleged unfavourable conditions of service and poor welfare.

NAN reports that the scheme, being operated by Primero Transport Services Ltd., provides bus services along dedicated lanes in the metropolis. The company, which began operation in November 2015, has 434 buses in its fleet and more than 2,000 employees.

When NAN visited the Majidun, Ikorodu depot of the transport company, hundreds of drivers had converged on the bus corridor and barricaded it to prevent movement. Also, buses belonging to the company were seen parked outside.

A driver, Mr. Julius Adejire, said: “For the past few days, we have been waiting for our salary for July but up to this moment, we have not received alert for the payment. The surprising thing is that as at Monday evening, some of us, including engineers and ground workers, had received alert. But the drivers have not received theirs; can we drive this bus with an empty stomach?”

Adejire said apart from delayed salary, the drivers want improved welfare and working conditions. “We are working like slaves because as a driver, you cannot stop to ease yourself or have break time.

“We are supposed to be doing 40 hours in a week but they subdued us to be doing 48 hours and only one day off instead of two days. We have been tolerating the inhuman policies before now because we believe that as a new company, it needs all our support, but now the situation is becoming tougher.”

He added that the management reneged on its contractual agreement to pay N60,000 as basic salary and N20,000 as performance bonus.

“Suddenly, after five months, they changed it to N40,000 basic and N40,000 bonus with a lot of conditions attached to the bonus. For instance, a driver will be denied the bonus pay if he or she is late to work for at least three times a month.

Another driver, Matthew Oyeyemi, told NAN that the delayed salary has made it difficult for him to offset the medical bills of his daughter, who was recently involved in an accident.

“I have a daughter, who was involved in an accident and whose bills I have to pay because I don’t have medical insurance yet.

“Also, there is no staff bus for drivers who come from as far as Sango Ota, Badagry and Agbara without accommodation arrangement. Drivers who could not afford to sleep on the bridge adjourning the BRT bus shelter often pay N500 daily to sleep in a nearby church.”

Attempts by the company’s Managing Director, Mr. Fola Tinubu, to have the protesting drivers resume work proved abortive as the drivers denied being calmed.

Tinubu hinged the delay in salary payment on an error on the part of the banking institution handling the disbursement of the salary.

“The late payment is due to an error and we have corrected it. The money was paid yesterday. Why they are doing this now beats my imagination because the money should be in their accounts by now and I have been trying to tell them.”

On the allegation of reviewed salary structure, Tinubu said the company’s management took the decision to review the salary in order to instill discipline in the protesting drivers.

“When I took over, they were being paid a basic salary of N60,000 and bonus of N20,000, but nobody was being paid the bonus. We discovered that majority of them were not conscientious and when they took the buses out they just parked somewhere and didn’t work.

“So, we decided to put efficiency into the system and adjusted the salary to N40,000 and the bonus to N40,000; it is exactly the same amount. That way, they will work hard to earn their bonus.”

Meanwhile, some stranded passengers expressed their disappointment and urged the Lagos State government to intervene in the matter in the interest of commuters.