Emir of Kano gets 48-hour ultimatum to answer query

The Kano State government Thursday asked the Emir of Kano Muhammad Sanusi II 48 hours to “give satisfactory explanations” on the allegations of financial impropriety made against the Emirate Council by the state’s anti-graft agency. 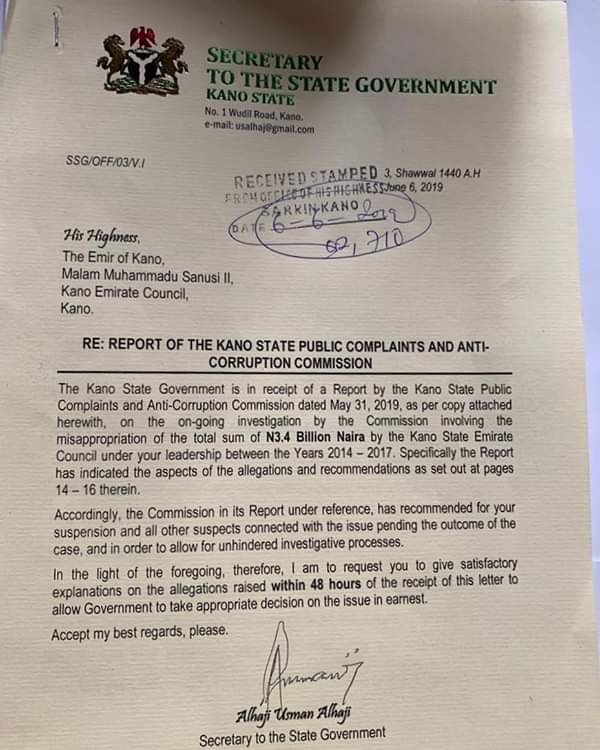 The Kano State Public Complaints and Anti-corruption Commission recommended the suspension of Sanusi over misappropriation of N3.4 billion.

According to the commission, the crime was committed between 2014 and 2017.

The recommendation was contained in a preliminary report of an investigation conducted by the commission and signed by its chairman, Mr Muhuyi Magaji. A copy of the report was made available to newsmen in Kano on Tuesday.

The investigation was in respect of a petition of financial misappropriation levelled against the Kano Emirate Council under Sanusi.

The interim report, which raised four cardinal issues bordering on indictments, amount involved, obstruction of investigation and recommendations, indicated that the Kano Emirate Council had spent over N1.4 billion in various ways believed to be fraudulent and un-appropriated.

Also, the Emirate Council was alleged to have spent over N1.9 billion un-appropriated on seemingly personal matters, contravening the provisions of Section 120 of the 1999 Constitution of the Federal Republic of Nigeria (as amended) and Section 8 of the Kano State Emirate Council Special Fund Law 2004.

The expenditures also allegedly violated Section 314 of the Penal Code as well as the provisions of Section 26 of the Kano State Public Complaints and Anti-Corruption Commission Law 2008 (as amended).

“It is also the opinion of this commission, based on the available evidence, that Emir Muhammadu Sanusi II continued to undermine the investigation through various means which include giving instruction to all officers invited for clarification to shun the commission’s invitation.

“The act is seriously affecting the process of our statutory responsibility and offends the provisions of Section 25 of the commission’s enabling law of 2008 (as amended),” the report said.

Consequently, the panel recommended that the principal suspect in the person of Sanusi and all other suspects connected with the case be suspended, pending the final outcome of the investigations.

“This is a necessary administrative disciplinary action aimed at preventing the suspects from further interfering with the commission’s investigations.

“The commission further recommends that the contract awarded to Tri-C Nigeria Limited for renovation of Babban Daki, Kofar Kudu and Gidan Sarki Dorayi should be revoked as the company belongs to one of the suspects in person of Alhaji Mannir Sanusi, (The Chief of Staff in the Emirate),” it said.

According to the report, the company failed to settle the sub-contractor, Cardinal Architecture Ltd, after being duly paid.

The panel recommended that appropriate authority should be put in place to oversee the affairs of the Emirate Council in line with established statutes and policies, pending the final outcome of the commission’s probe.

It urged the state government to take further legal action against all the suspects as soon as the final outcome of the investigations is presented and legal advice accordingly issued.

At press time, the emirate council could not be reached to react to this fresh development as calls and text messages put across to the Chief of Staff to the emir, Alhaji Munir Sanusi, for response were not responded to.

In a reaction to the issue, the spokesman for the Renaissance Coalition Nigeria, Comrade Ibrahim Waiya, cautioned that any attempt to remove the emir would amount to contempt of court.

Waiya said the group was disturbed by the indictment of the emir when the investigation was yet to be concluded. He urged the government to be fair and just while performing her responsibilities.

“We believe this action can trigger tension and constitute a security threat. We caution Governor Abdullahi Ganduje to be careful in handling the recommendation of the commission because of the security implications. He will be held responsible as the chief security officer of the state for any breach and violation of laws and order in Kano,” Waiya warned.