FACT CHECK: No, this is not the man who drove coronavirus patient to Ogun State

A Facebook post published by AIT News Nigeria claimed that the man who drove the first person to test positive to the novel coronavirus in Nigeria to Ogun State escaped from a hospital where he was receiving treatment after he also tested positive to the virus.

The author of the post claimed that the picture they published was that of the driver named Adewale Isaac Olorogun and that he has demanded to be paid N100 million by the government before he could return for treatment.

The post also claimed that supposed Olorogun sent an SMS to Ogun State commissioner for health saying: nor be only una go chop the money, na my family turn, either una pay or una die, i go waka sotay plenty people follow me remove from this wayward country.

It was also claimed that the driver wished he could infect Nigerian President Muhammadu Buhari with the virus. 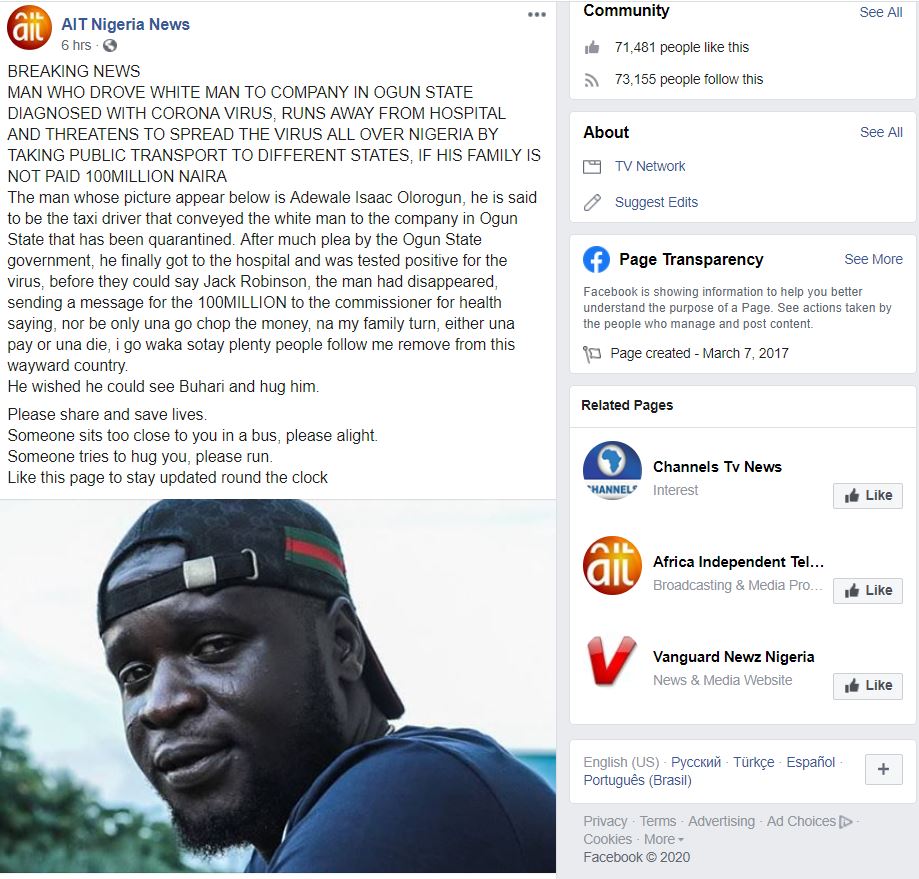 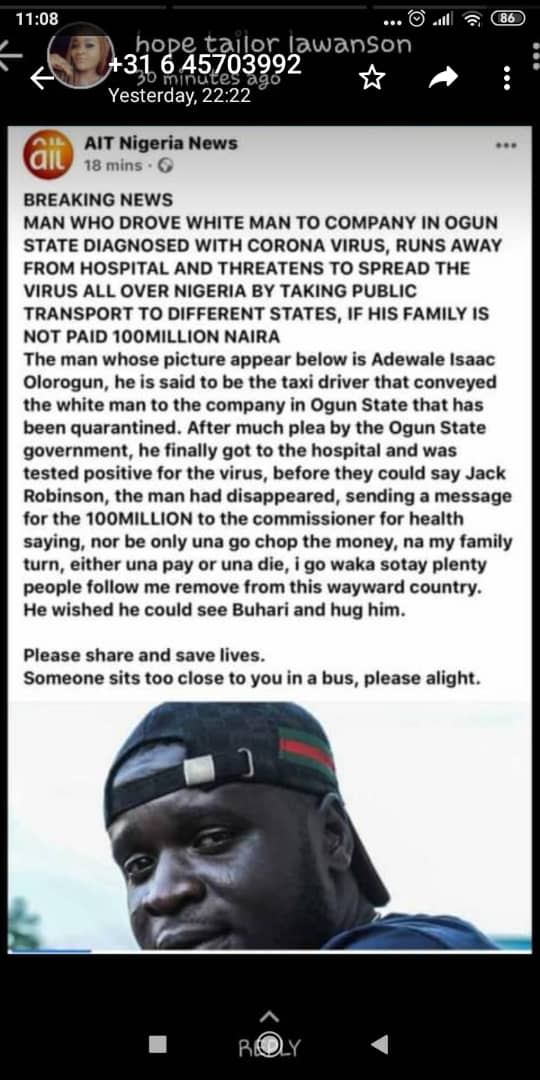 Screenshot of the post as shared on a WhatsApp group

The Fact
The post contains claims that are untrue. AIT Nigeria News is a clone of the African Independent Television’s page that passes itself across as the actual AIT Facebook page.

The page has a history of posting false claims. A Google reverse image search on Google showed the picture it shared as that of the driver was first published in a story written by Monica Mark for BuzzFeed News on December 15, 2018. It was taken by Fati Abubakar for BuzzFeed News. The same picture was pubished by BuzzFeed on Twitter, at least twice, on the same date.

In that story, the name of the person in the picture was given as Jude Ikuenobe, a Nigerian who returned home after years of slavery in Libya.

Moreover, a spokesman to Ogun State governor also told The Sun that the Facebook post is fictitious and that no such thing happened.

World
Berlusconi pulls out of Italian presidential race
1 day ago
Billionaire former premier Silvio Berlusconi withdrew from the race for Italy's presidency on Saturday, two days before voting starts, but repeated his opposition to Prime Minister Mario Draghi taking the job.
Nigeria
We won't allow killer herdsmen, Kidnappers in our forest, says Ogun Govt
1 day ago
Ogun State government, yesterday, said it will not allow any part of the state to be taken over by terrorists, killer herdsmen, kidnappers or bandits as a safe haven to unleash mayhem on the people.   The government said it is already collaborating with neighbouring states like Oyo and Lagos, to comb its forests and…
Sport
Laporte rescues Man City in Southampton draw
1 day ago
Manchester City's 12-game winning run in the Premier League came to an end as Aymeric Laporte rescued a 1-1 draw against Southampton on Saturday.
Sport
Dzeko strikes late to save Inter against Venezia
1 day ago
Edin Dzeko made sure that Inter Milan would hold off their Serie A title rivals on Saturday with a last-gasp strike which gave the league leaders a 2-1 win over Venezia.
Sport
Rashford sends Man Utd into Premier League top four
1 day ago
Marcus Rashford struck with virtually the last kick of the game to take Manchester United into the Premier League top four at West Ham's expense with a 1-0 win on Saturday.

World
Tunisia 'wallows in uncertainty' as Saied pushes ahead
31 Dec
Opposition voices silenced and an economy on the brink: experts say Tunisia is "wallowing in uncertainty" as President Kais Saied readies to ask the public for their thoughts on a new constitution.

World
Putin says Russia 'firmly' defended interests in 2021
31 Dec
President Vladimir Putin said Moscow "firmly" defended its interests in 2021 -- a year marked by an unprecedented crackdown on the opposition and increased tensions with the West -- in a New Year's address.

Sport
Liverpool's Klopp confident Chelsea game will go ahead despite virus cases
31 Dec
Liverpool manager Jurgen Klopp believes his side's crucial match against Chelsea will go ahead on Sunday despite three new coronavirus cases in their camp as another fixture was called off by the Premier League.

World
Pandemic spirals, but deaths drop
31 Dec
The number of Covid-19 cases spiralled by more than a half across the world this week, while pandemic-linked deaths dropped nine percent.

Sport
Liverpool's Klopp confident Chelsea game will go ahead despite Covid chaos
31 Dec
Liverpool manager Jurgen Klopp believes his side's crucial match against Chelsea will go ahead on Sunday despite three new coronavirus cases in his camp as another Premier League fixture was called off.