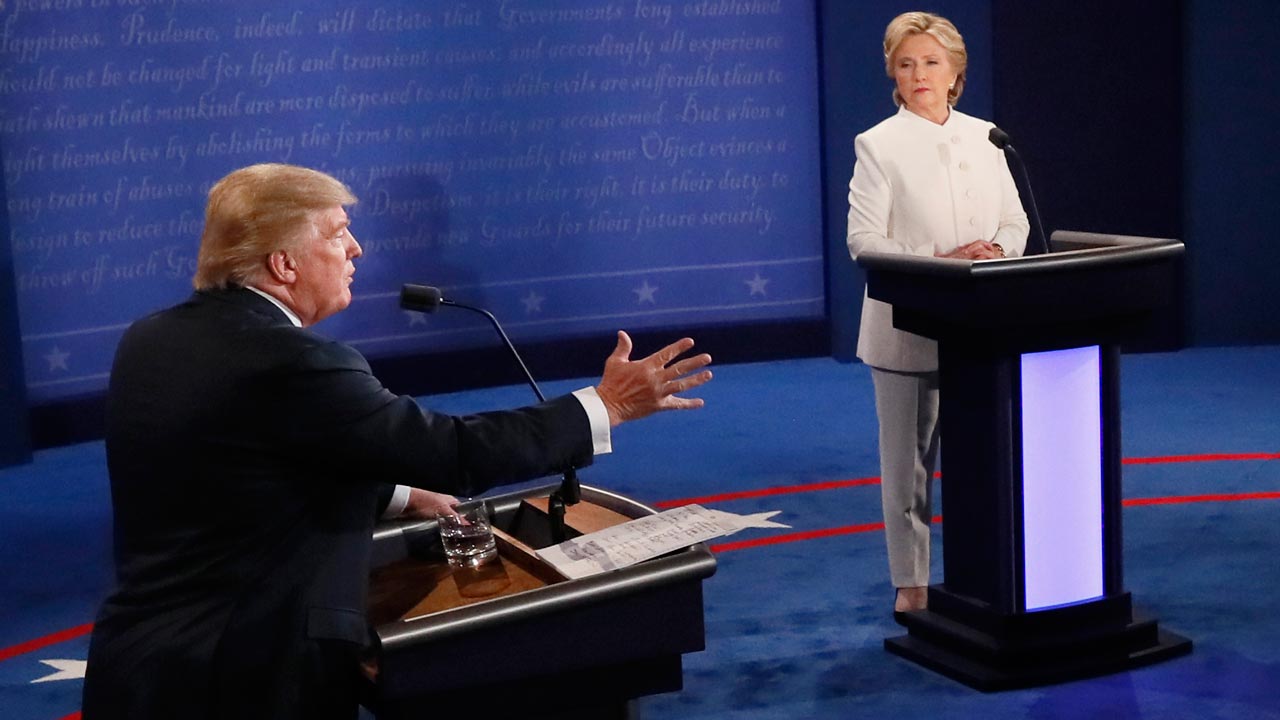 Republican nominee Donald Trump gestures as Democratic nominee Hillary Clinton looks on during the final presidential debate at the Thomas & Mack Center on the campus of the University of Las Vegas in Las Vegas, Nevada on October 19, 2016. Mark RALSTON / AFP 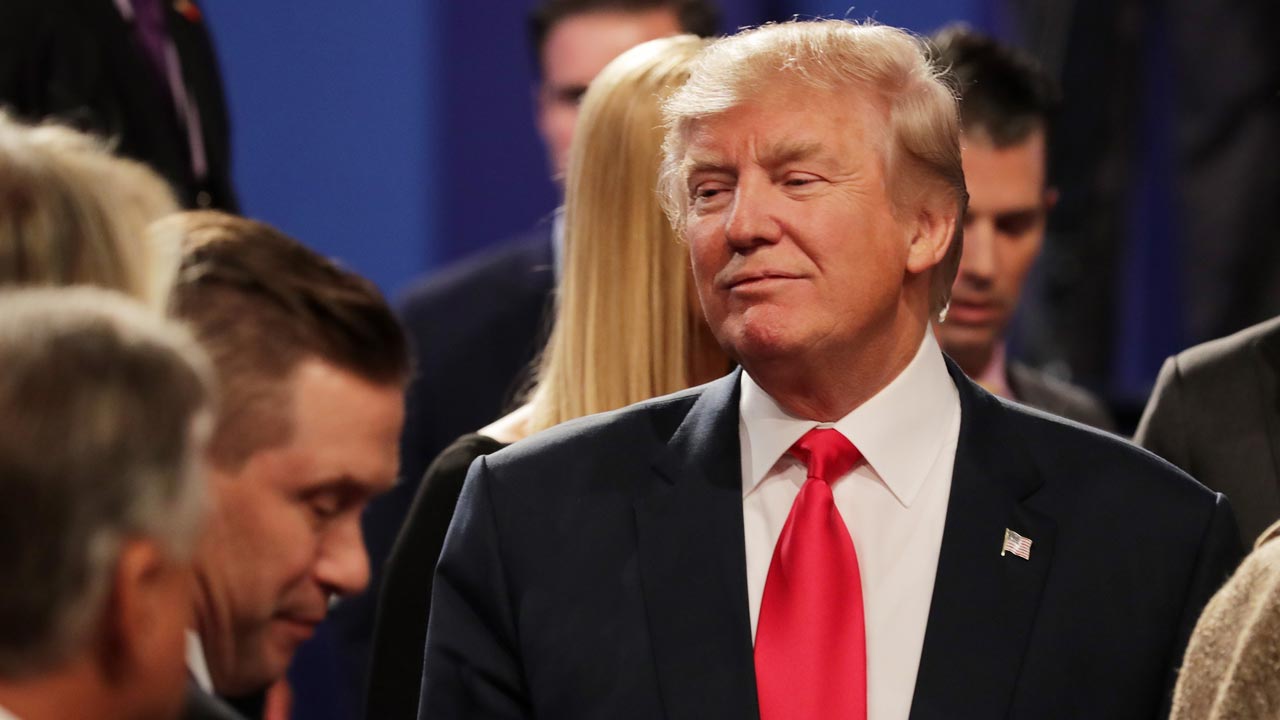 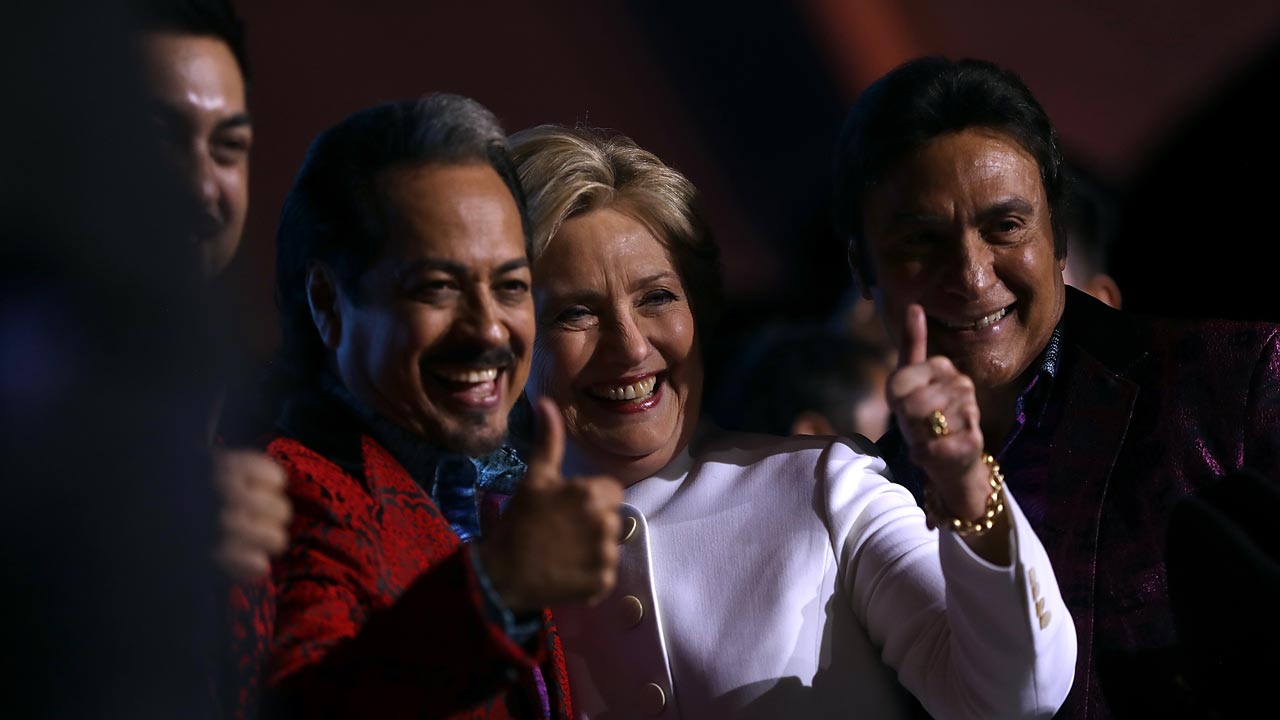 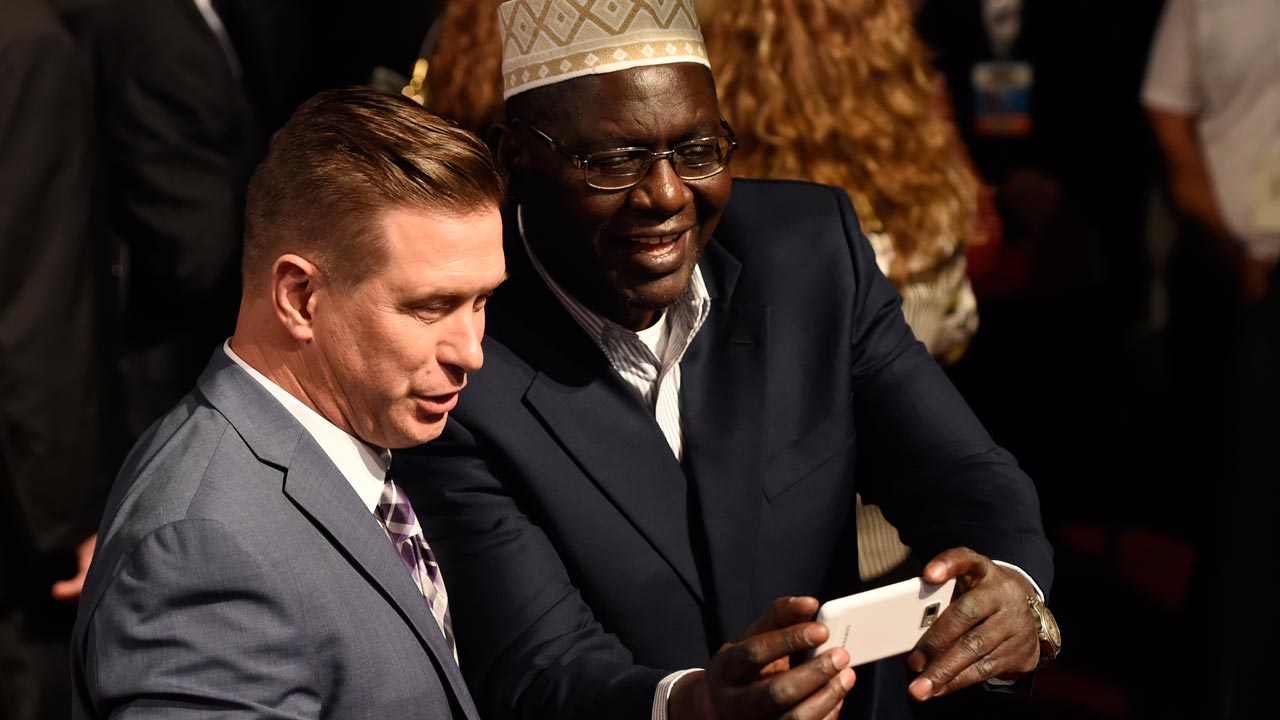 Turning his final presidential debate appearance into an unprecedented assault on US political convention, Donald Trump refused Wednesday to say that he would respect a Hillary Clinton victory in November.

As the last head-to-head encounter of the toxic 2016 campaign descended into mud-slinging, the Republican mogul doubled down on claims that his Democratic rival’s supporters plan to rig the vote.

And when asked whether he would commit to recognizing the result of the November 8 vote no matter what, the reality television star said: “I’ll tell you at the time. I’ll keep you in suspense, OK?”

Clinton declared herself “appalled” by what she said was an attack on 240 years of US democracy.

And, quoting her former rival Bernie Sanders, she called Trump the “most dangerous person to run for president in the modern history of America.”

Trump had come into the third televised debate of the 2016 campaign in Las Vegas looking to restore hope to his campaign just 20 days before Election Day.

Dogged by allegations of sexual misconduct, trailing in the polls and losing ground in key swing states, the 70-year-old was looking to capitalize on his last major chance to woo wavering voters.

“The media is so dishonest and so corrupt and the pile-on is so amazing,” Trump said, referring to reports citing women accusing him of sexual assault, which he said were “fiction” and drummed up by Team Clinton.

He alleged that millions of fake voters had been registered and that the 68-year-old Clinton should not even have been allowed to run because she mishandled classified State Department emails.

Even some Republican lawmakers were outraged. Senator Jeff Flake said Trump was “beyond the pale” and onetime presidential candidate Senator Lindsey Graham said if Trump loses, it will be “because he failed as a candidate.”

The extraordinary exchange was only one of a series of ferocious clashes, as two stony-faced candidates faced off from behind podiums with little stagecraft on everything from immigration to Syria.

At one point, Trump broke into one of Clinton’s responses to call her “such a nasty woman.” The candidates took and left the stage without shaking hands.

The Democratic former secretary of state scored an early hit against the Republican property mogul, alleging that Russian President Vladimir Putin was backing his run for office.

Clinton cited reports from US intelligence agencies that Russian cyber attacks had targeted her party and campaign and demanded that Trump condemn the interference.

“They have hacked American websites, American accounts of private people, of institutions,” she declared.

“Then they have given that information to WikiLeaks for the purpose of putting it on the internet.”

The Manhattan billionaire appeared not to mind giving credence to the charge that he sides with Moscow rather than Washington’s own intelligence agencies, declaring: “Our country has no idea.”

Trump argued that he might negotiate better relations with Moscow than Clinton would, declaring: “Putin, from everything I see, has no respect for this person.”

Clinton’s response was sharp: “Well, that’s because he would rather have a puppet as president of the United States.”

Trump blustered back: “No puppet. You’re the puppet.”

In what has been a bitter campaign, the two White House hopefuls got off to a subdued but oddly substantive start to the debate, compared to previous brawls.

They were asked about their vision for the Supreme Court, prompting Clinton to argue the election was about “what kind of country are we going to be.”

She insisted gay rights and women’s rights must not be rolled back.

Trump echoed conservatives who believe “the Supreme Court is what it’s all about,” vowing to appoint anti-abortion justices who would also protect gun rights.

“If you go with what Hillary is saying, you can take the baby and rip the baby out of the womb of the mother just prior to the birth of the baby,” he said.

Pundits have declared the presidential race all but over after the provocative billionaire attacked leaders of his own party and obliterated the normal rules of political decorum.

In response to Trump’s attacks on the legitimacy of the vote, President Barack Obama has implored him to “stop whining.”

Trump’s debate stance did nothing to quell fears that he and his most passionate fans might not recognize the election’s outcome, thereby plunging the country into a political crisis.

Trump predicts an electoral surprise — what he calls a “new Brexit” — when Americans vote.

But it remains an open question whether his stunts will have a positive impact with voters.

Clinton leads by more than six points in an average of national polls compiled by RealClearPolitics.

Women especially have thrown their support to the former secretary of state, senator and first lady, who is poised to become the first female president in American history.

World
20 years on, dreams of euro rivalling dollar persist
28 Dec
When 12 countries adopted the euro two decades ago, French president Jacques Chirac hailed a Europe that was "affirming its identity and its power".

Nigeria
Akinwumi Adesina: Face of a positive Nigeria, setting new agenda for African Development
30 Dec
It was a somber afternoon, early 2020, when the bad news wafted across the globe. The world battling its worst pandemic in 100 years was too weary to notice it.

Opinion
A global mobility solution in COVID-19 pandemic
31 Dec
With a passport that provides visa-free travel to just 45 countries, Nigerian citizens are all too familiar with the downsides of owning a weak passport.

World
US voices 'concern' on Iran space launch but favors talks
30 Dec
The United States voiced concern Thursday about Iran's new space launch, saying it would help the clerical state's missile program, but indicated it was still pursuing diplomacy to return to a nuclear deal.