By Tina Abeku, Abuja
Share on Facebook Share on Twitter Share on WhatsApp Share on Telegram
The Nigeria Security and Civil Defence Corps, (NSCDC), has given the family of its officer, Inspector Iliyasu Abraham, killed in the recent Kuje medium custodial center’s attack by Islamic State of West Africa, (ISWAP), terrorists, on July 5, 2022, the sum of N2.8 million as an intervention to support the family after losing its breadwinner.
1 of 10 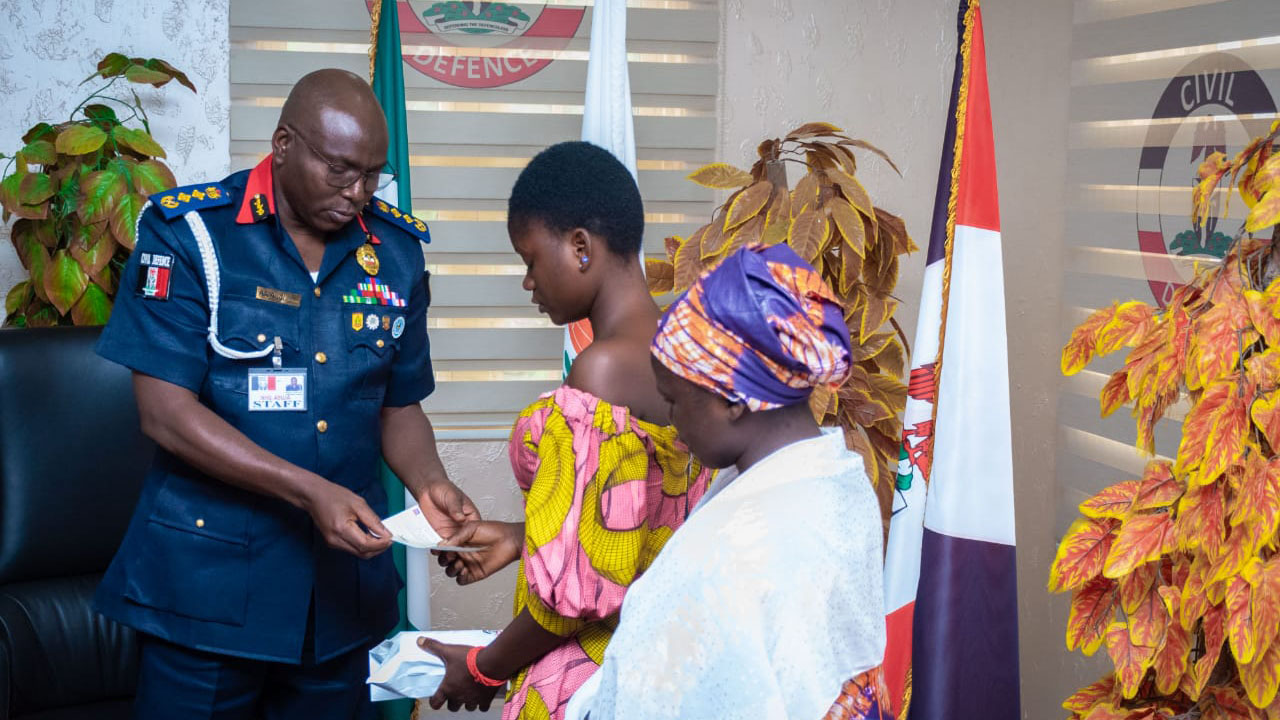 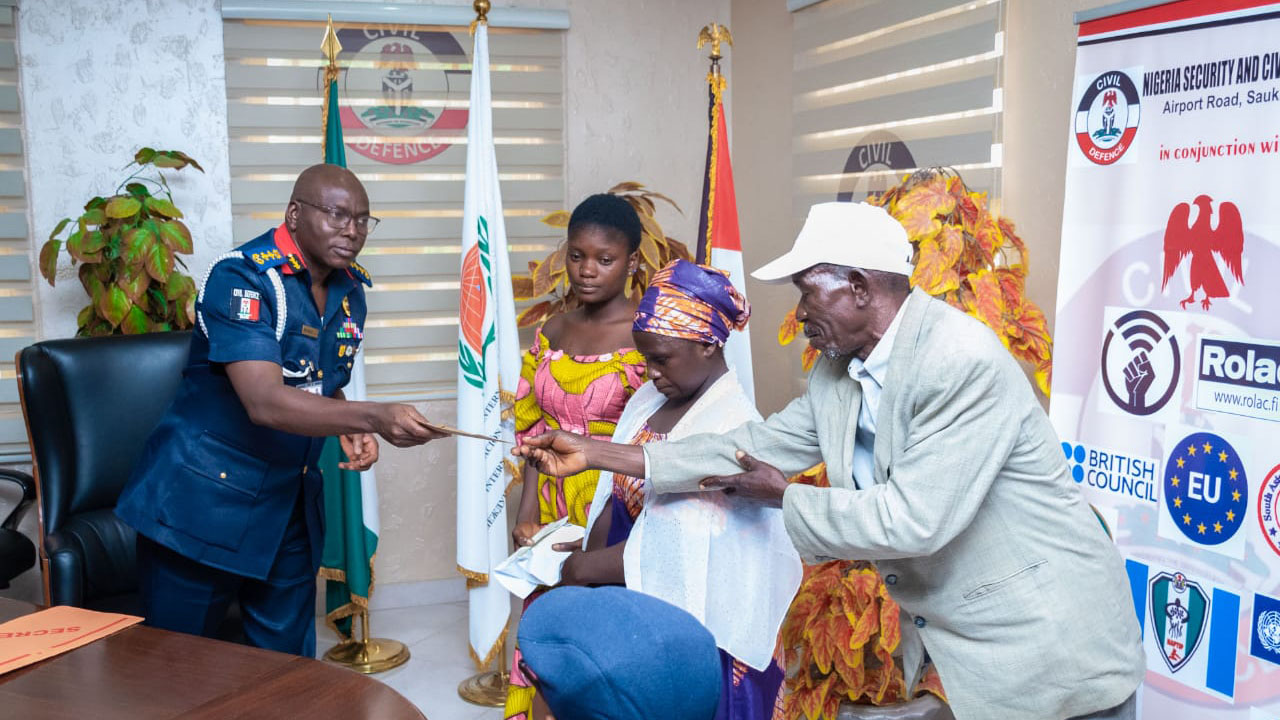 The Nigeria Security and Civil Defence Corps, (NSCDC), has given the family of its officer, Inspector Iliyasu Abraham, killed in the recent Kuje medium custodial center’s attack by Islamic State of West Africa, (ISWAP), terrorists, on July 5, 2022, the sum of N2.8 million as an intervention to support the family after losing its breadwinner.

Presenting a check of N2.5 million and cash of N300, 000 to the wife of the deceased, Mrs Elizabeth Abraham and her daughter yesterday in Abuja, Commandant General of the Corps, Dr Ahmed Audi, said the agency is fully committed to the welfare and wellbeing of its officers and the heroic passing of Abraham will not be taken for granted noting that the circumstances of his passing while on active duty.

In a statement signed by the Public Relations Officer of the Corps, (PRO), Olusola Odumosu, Audi explained that the money given to the family was in fulfilment of his promise to ensure that necessary compensation is given to the family in due time and as an intervention from government and the Corps to assist the deceased family in ameliorating some burial expenses.

While consoling the family, the CG assured the daughter of late Inspector Iliyasu of employment into the corps as soon as the federal government gives approval for recruitment into the agency saying that her father would be remembered as a hero, who died in active serve.

Audi further said, “The Corps will not be deterred from protecting critical national assets and infrastructure, lives and property of law-abiding citizens and regulation of private guards amongst other mandates of the Corps.”

He charged all the Zonal Commanders, State Commandants, Area Commanders, CG’s Special Intelligence Squad and the Special Anti-vandal Squad among others, to continue to develop new strategies as they work in synergy with other security agencies in confronting all forms of security challenges affecting Nigeria.

Technology
Analysing Nigeria's National Artificial Intelligence Policy
1 day ago
It is no more news that Artificial Intelligence (AI) growth can be attributed to Digital Innovation and the evolution of technology. Globally, countries are grappling with ways to manage the exponential growth of new and emerging technologies to advance their economies. AI remains one of the most significant technologies for business, the economy, and society…
Nigeria
FG inaugurates committee to review IPPIS, others over irregularities
1 day ago
The Federal Government has inaugurated a Presidential Steering Committee to review Integrated Payroll and Personal Information System(IPPIS), the Treasury Single Account(TSA) and Government Integrated Financial Management System( GIFMIS) over irregularities.
Nigeria
Again, Buhari urges ASUU to call off strike
1 day ago
President Muhammadu Buhari has again appealed to the Academic Staff Union of Universities (ASUU) to call off the ongoing strike.
Sport
Tottenham boss Conte relishing heated Chelsea challenge
1 day ago
Tottenham Hotspur manager Antonio Conte has said Sunday's match away to London rivals Chelsea will be an acid test of his side's progress.
Sport
Tuchel reveals 'bond' with Aubameyang amid Chelsea rumours
1 day ago
Chelsea boss Thomas Tuchel said he will always have a "close bond" with Pierre-Emerick Aubameyang as speculation links Barcelona forward with a move to Stamford Bridge.

Business News
Government promises to address challenges undermining food production
28 Jul
Amidst cries by farmers that they are unable to go to the farm due to frequent attacks by herdsmen, the Minister of Agriculture and Rural Development, Dr Mohammed Abubakar yesterday...