By Guardian Nigeria
Share on Facebook Share on Twitter Share on WhatsApp Share on Telegram
All is now set for New Nigeria People’s Party (NNPP) gubernatorial candidate, Ambassador Olufemi Ajadi Oguntoyinbo, and his team to storm Ogun neighbourhoods for a grassroots campaign. A detailed grassroots campaign schedule, a copy of which was obtained, showed that the campaign will kick off on January 25, 2023, with Ado-Odo local government, covering Wards…

A detailed grassroots campaign schedule, a copy of which was obtained, showed that the campaign will kick off on January 25, 2023, with Ado-Odo local government, covering Wards 1–7 on the first instance and Wards 8–16 on the second.

On January 27 and 28, it will be the turn of the Sagamu Local Government Area, and this leg of the campaign will touch Wards 1–7 in the first instance and Wards 8–15 in the second instance.

The campaign trail thereafter shifts focus to Ijebu Ode for January 29 and 30, where the team will be visiting Wards 1–5 first and Wards 6–11 next.

The schedule continues as outlined by the campaign council on March 8, 2023, when the campaign trail berths at Abeokuta, the state capital, for the grand finale.

All party supporters are already mobilised and await the commencement date to begin storming Ogun neighbourhoods, touching both the grassroots and the cities in the gateway state.

The NNPP, which has continuously gained ground in the state, says it is determined to change the narrative in the politics of the state by mounting people-oriented programmes.

Find below a detailed grassroots campaign schedule as released by the party. 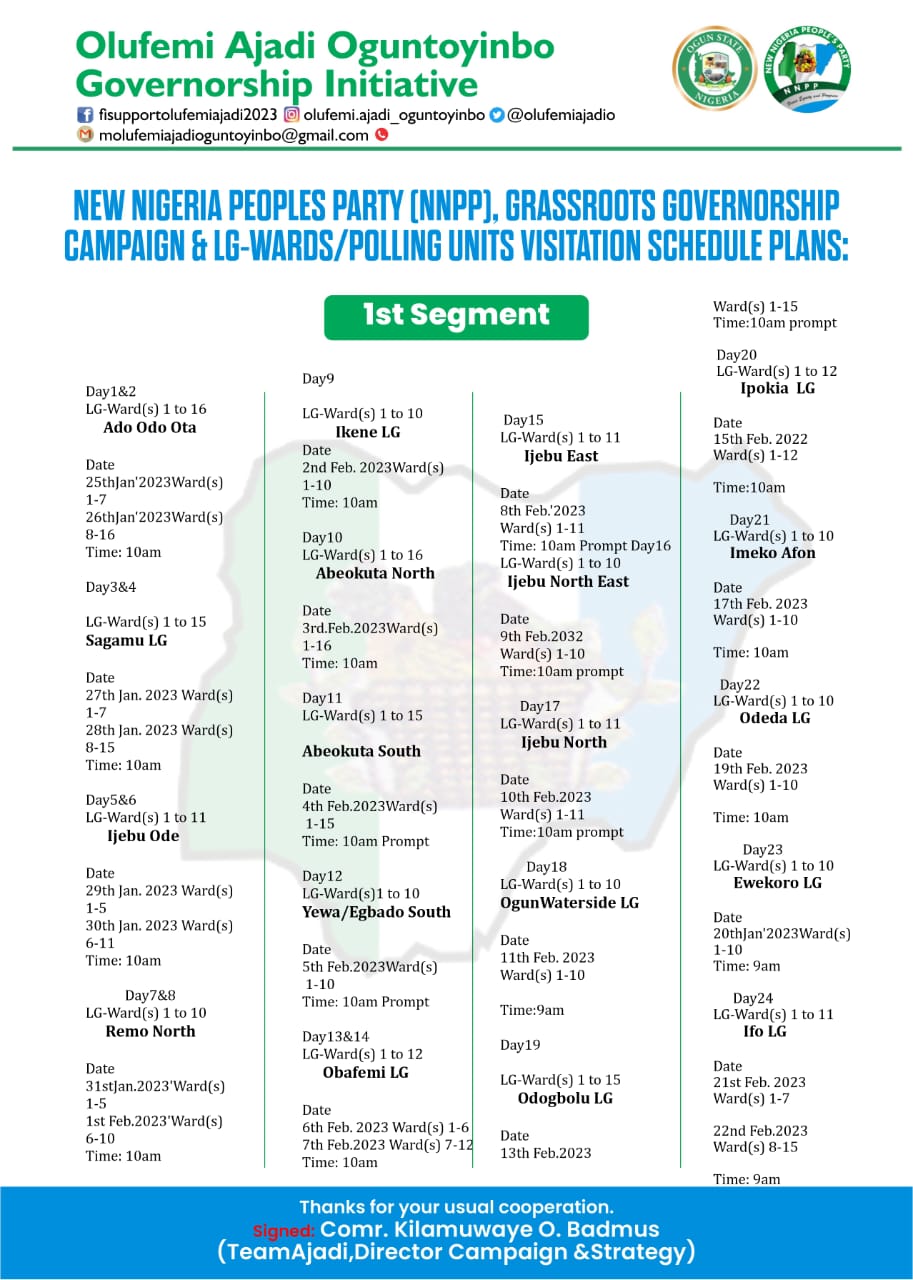 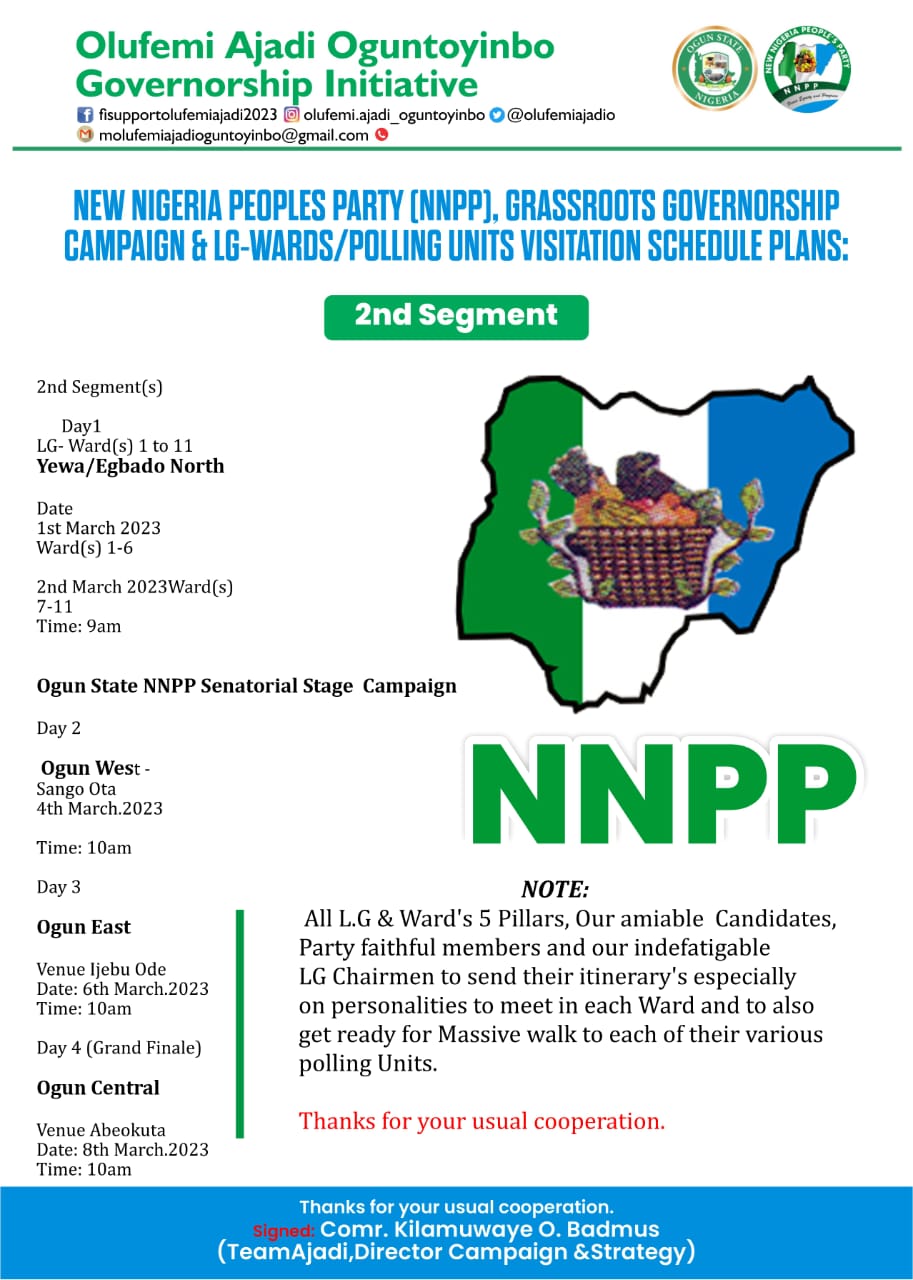 Nigeria
Supreme Court sacks Bwacha as APC governorship candidate in Taraba
14 mins ago
The Supreme Court on Wednesday nullified the nomination of Emmanuel Bwacha as the governorship candidate of the All Progressives Congress (APC) in Taraba State. A five-member panel led by Kudirat Kekere-Ekun delivered the judgment on Wednesday. A federal high court in Jalingo, Taraba state, first sacked Bwacha as the APC’s governorship candidate in September 2022…
Politics
2023 poll: Tinubu remains unstoppable in spite Presidential Villa conspiracy - APC PCC
36 mins ago
The All Progressives Congress presidential campaign council (APC PCC) says the conspiracy against the presidential aspiration of Asiwaju Bola Ahmed Tinubu by forces within the presidential villa should not be seen as a surprising development. APC PCC's Director strategic communications, Mr Dele Alake insist that Tinubu remains unbeatable in the presidential poll scheduled to hold…
Nigeria
Exchange predicts decline in grain production
37 mins ago
Associated Foreign Exchange (AFEX) has predicted decline in production of grain commodities this year following impact of flooding, devaluation of the naira, high logistics and socio-political situation in Nigeria.
Nigeria
In race to improve technology, Organisation unveils initiative to empower Lagos students digitally
39 mins ago
In a bid to improve technology in the country, a social enterprise, Teens can code in collaboration with Lagos State Science Research and Innovation Council (LASRIC) has unveiled the STEM 360 program with a focus on skills development for secondary school students living in underserved communities of Lagos by expanding access to computer science education and coding opportunities that produce digital transformation literacy.
Nigeria
Obi commiserates with Jigawa over demise of Emir Sanusi ll
41 mins ago
The presidential candidate of the Labour Party (LP) Peter Obi has sent his message of condolence to the Government and people of Jigawa over the death of the Emir of Dutse, Alhaji Mohammed Nuhu Sanusi ll. Obi in a statement said, "It is with deep shock, but with submission to the will of Almighty Allah,…

Politics
Division in O To Ge camp as AbdulRazak seeks renewal of mandate Governor
8 Jan
As the battle for the soul of Kwara State rages on, it remains to be seen whether the incumbent Governor AbdulRahaman AbdulRazak may be coasting to another victory at the next governorship election in spite of the criticisms that have trailed his first term in office. There has been internal wrangling among his allies with…

Politics
NNPP unveils campaign council 47-days to election, names Kwankwaso chairman
10 Jan
The New Nigeria Peoples Party (NNPP) on Monday unveiled its Presidential Campaign Council, with its presidential candidate of the Rabiu Kwankwaso as chairman of the council. This is coming 47 days before the Presidential and National Assembly elections scheduled for February 25, 2023. Addressing supporters of the party in Abuja during the inauguration of the…

Guardian Arts
Issues that will shape media landscape in 2023
11 Jan
Add New Post ‹ The Guardian Nigeria News - Nigeria and World News — WordPressDespite multi-faceted challenges facing the country such as spiralling inflation, rising energy cost, scarcity of foreign exchange (FOREX), the dwindling value of the naira and manageable aviation sector, stakeholders in the media industry are confident that the modest 2.5 per cent…

Nigeria
INEC assures poll must hold, says 93.4m eligible to vote
12 Jan
Independent National Electoral Commission (INEC) has declared that only 93, 469,008 Nigerians are eligible to vote in next month’s poll. The Commission also said it is not considering postponement or cancellation of the election due to security threat.

Nigeria
Obi, Yakubu, Kwankwaso for Chatham House next week
12 Jan
Our With just over a month to February presidential election, three of the main protagonists will next week mount the podium at the Royal Institute of International Affairs- Chatham House - to talk about their prospects and readiness.