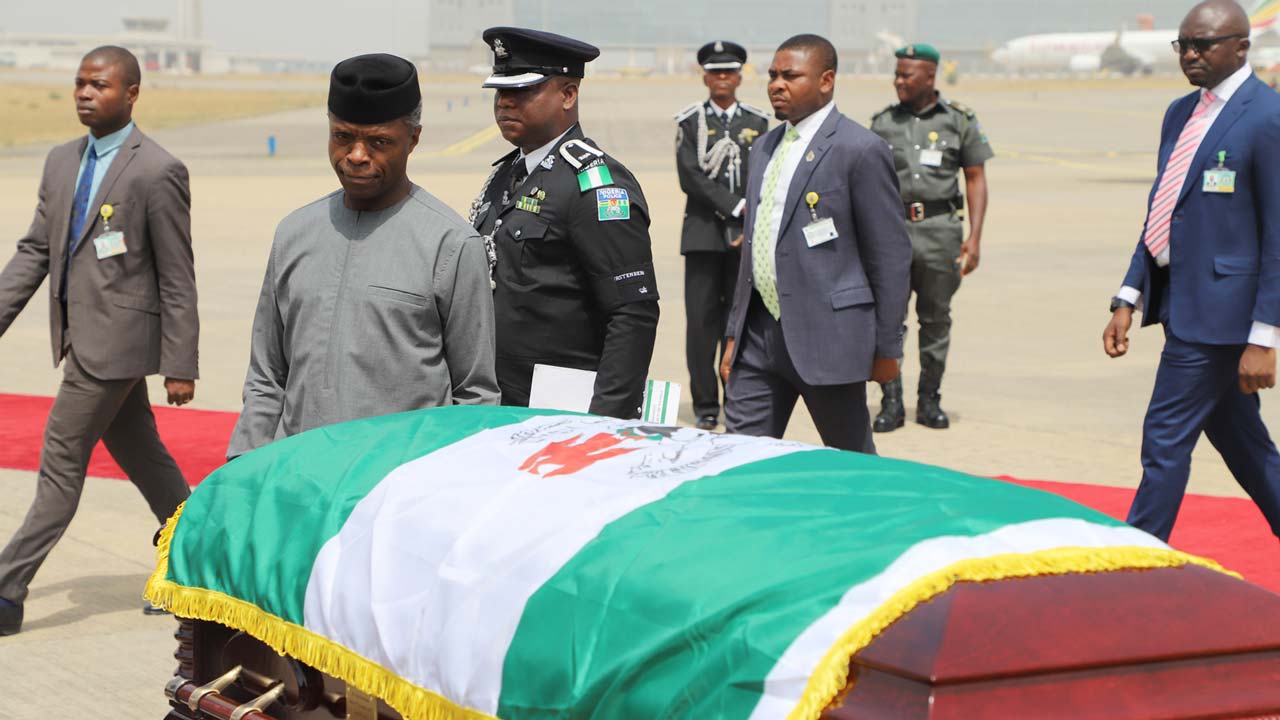 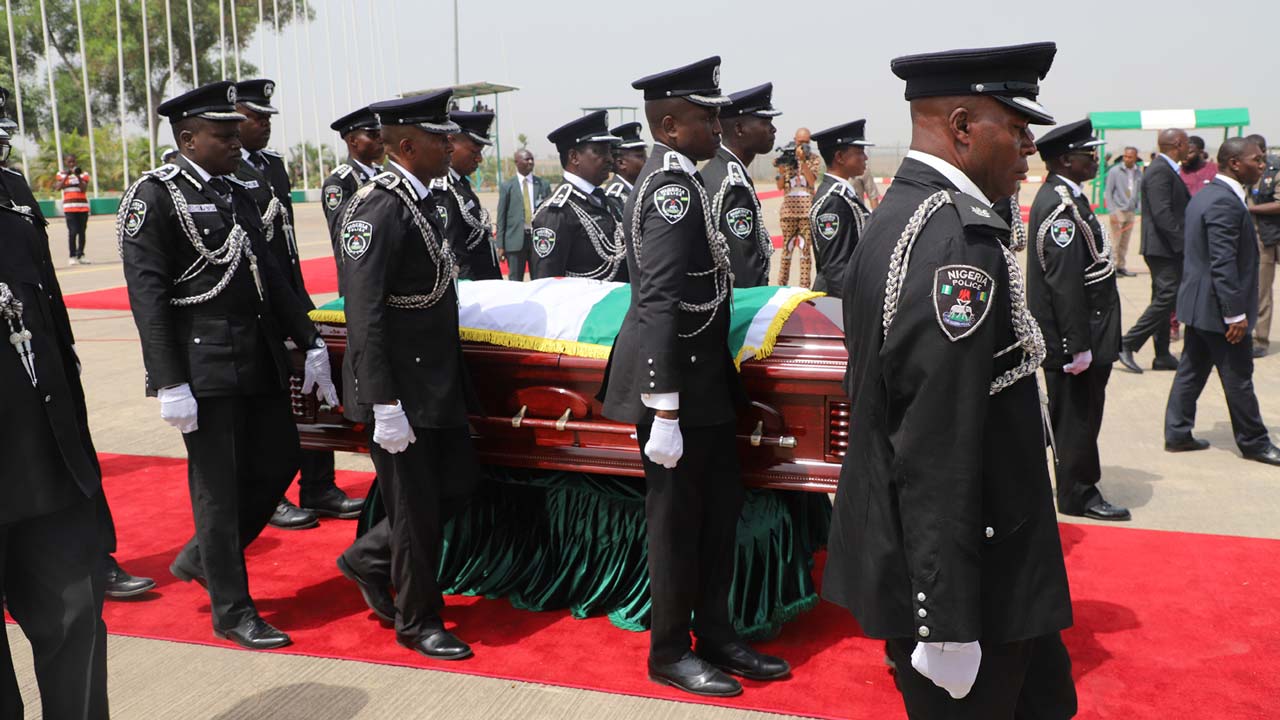 The Remains of Late Chief Alex Ekweme at the Special Parade in his Honour in Abuja Yesterday: Photo Philip Ojisua 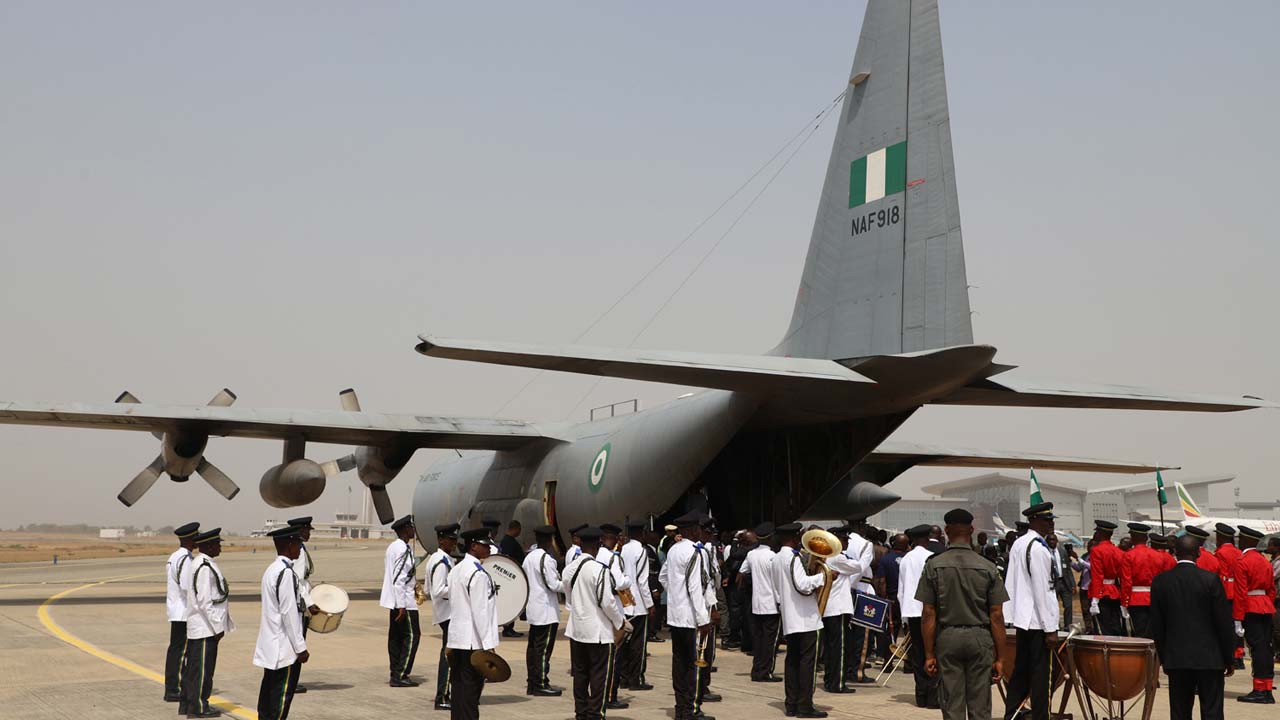 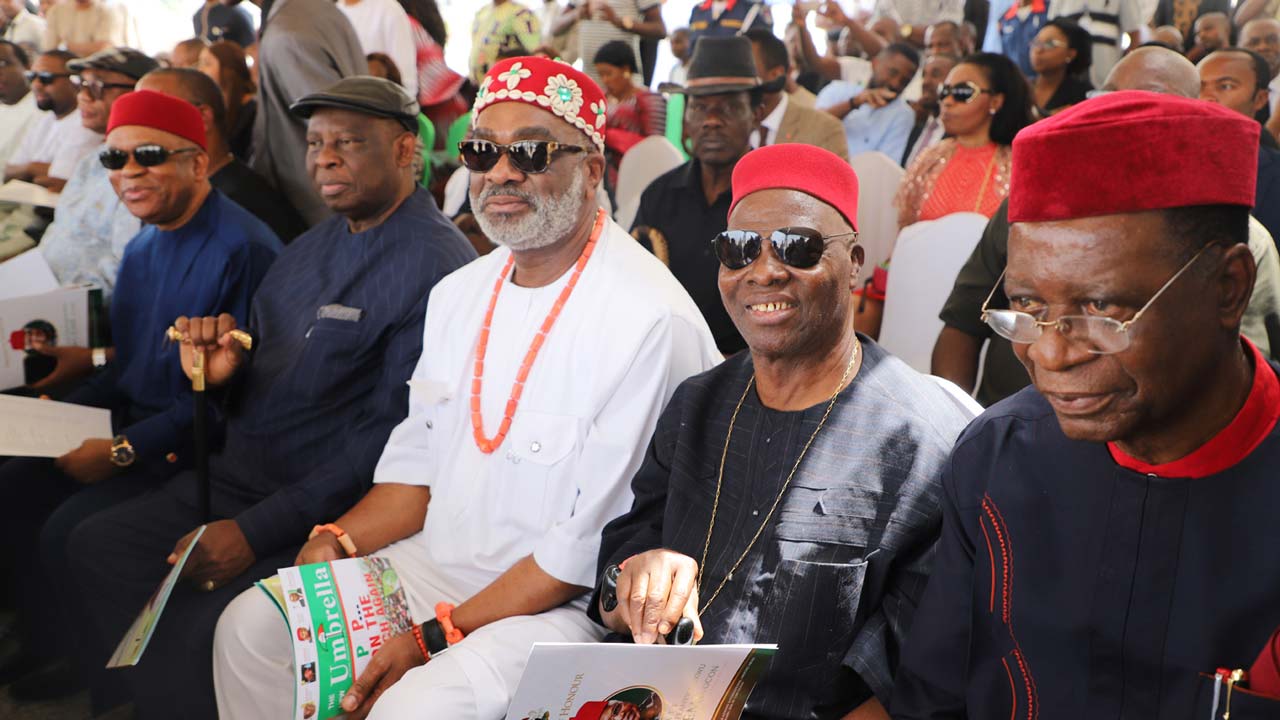 Disbelief and shock yesterday trailed Federal Government’s claim that it would spend over N1 billion in preparation for the burial of the former Vice President, Dr Alex Ifeanyichukwu Ekwueme, whose remains arrived in Enugu yesterday.

The Minister of Labour, Dr. Chris Ngige, was quoted as saying that the Federal Government approved N1bilion, part of which had been spent, in readiness for the burial billed for February 2 in Oko, Anambra State.

Although efforts to speak with members of his family to ascertain the veracity of the claim proved abortive (as none was willing to speak on the matter), some prominent Igbo leaders, who reacted to the development, doubted that any such thing happened.

A former governor of Anambra State, Dr. Chukwuemeka Ezeife, stated: “I do not doubt that the Federal Government may have spent such a huge amount but my worry is how much of it that may have entered private pockets. How much is the burial envelope and what are the plans for the burial? I don’t know what to believe but if it is true that such an amount has been budgeted for the burial, it is unreasonable.”

The Chairman of the South-east burial committee, Prof. Simeon Ortuanaya, denied that his committee has received assistance from the Federal Government in planning the burial.

“We were shocked to hear that. We did not see any such money. We read it from the newspaper”, he said.The Anglican Bishop of Enugu Diocese, Rt. Rev. Emmanuel Chukwuma, who was part of the dignitaries that received Ekwueme’s remains at the Akanu Ibiam, Enugu airport had queried the claim as “unacceptable.” He said the Federal Government should explain how the N1 billion was spent, stressing that the late Ekwueme, being a man of accountability, would not be happy with such an amount being spent on him, especially in the face of the infrastructure challenges in his South-east region.

Chukwuma described Ekwueme as a great politician that would never be forgotten as far as politics of the country is concerned. “We are happy that the government is giving him a befitting burial, but one thing is that people should emulate the legacies he left behind. Giving him a befitting burial, however, does not mean making all sorts of claims concerning it,” he said.

For the Emeritus President of a pan-Igbo organisation, Aka Ikenga, Chief Goddy Uwazuruike, it was unimaginable that the Federal Government would spend such an amount of money to bury Ekwueme when there are various challenges facing the south-east which government has neglected.

He said: “I think it is incredible news. It’s too fantastic. I can’t imagine the Federal Government spending such on a man his family single-handedly took care of while he was sick as well as ensured that he was flown abroad. If you are building a new road to Oko, of course that is expected because you need the road to pass through. If you are rehabilitating the Akanu Ibiam Airport that is also expected. But to bury Ekwueme with such an amount is unthinkable.

“Such a sum was not voted anywhere as there have never been signs that the Federal Government made Ekwueme its responsibility while he lived. If they used the money to build a road from Awka to Oko and Owerri, people will be happy and appreciate the government. So I think it is an insult to the Ekwueme family for anybody to make such a claim. What did the Federal Government do to show that Ekwueme served this country well when he was alive? Ekwueme used his personal resources to build the polytechnic in his Oko community as well as the hotel around his place as part of efforts to develop his community. What can we say has been government’s contribution? Are they saying they loved him this much? It is sad that someone is saying all these.”

His position was accentuated by a statesman, Chief Ralph Obioha, who described the claim as “ridiculous.” Obioha added: “I think the figure is exaggerated to the point that people cannot believe the story. This is the problem with Nigeria where figures are bandied to cause disaffection among the people. Even if the entire place in Ekwueme’s house is paved with gold, it will not cost as much as N1billion.That is not possible and I believe it can cause trouble. Such an amount cannot be spent on a state burial.”

Also, the Movement for the Actualisation of the Sovereign State of Biafra (MASSOB), dismissed the claim as “blatant falsehood.” MASSOB leader, Uchenna Madu, said: “Ngige is ridiculing himself by that kind of statement. Is he now the minister of information or chairman of the burial committee? I am advising him to caution himself because he is an old man and should stop impressing his masters. As an Igbo man, he should know that you don’t lie over the dead. That is the way they cheapen themselves. We in MASSOB don’t believe such a story because this government has never demonstrated that it is in love with Ndigbo. A government that decided to allocate all the juicy positions in the country to their people cannot turn back to show that it values any Igboman even in death. I think they are trying to mock us and are using Ngige to carry it out. This government will be the last to accord such respect to an Igbo man. The Federal Government is not the one taking care of Ekwueme’s burial.”

Ngige has, however, said that the Federal Government has set aside the N1billion to cover the burial expenses and sundry items, including the fixing of the Agulu -Nanka -Oko Road, and the Nnobi-Nnewi Road at the cost of over N480 million.“The building of the tomb, hospital bills, flight of the casket among other things are all included in the amount,” he said, noting that the late Ekwueme would be given a befitting burial.The late Eklwueme’s younger brother, Laz who is also the traditional ruler of the Oko community told The Guardian that he was not in a position to comment on the matter.

It was learnt that work is in progress on some of the roads, especially on the Agulu -Nanka -Oko Road, and on his country home at Ezioko village, Oko in Orumba North Local Government Area of Anambra State. It was equally learnt that the Federal Government would name a national monument after the late former vice president.

“We are getting ready for the burial of our iconic figure. In the next 48 hours, everything will be ready, government has assisted the family in taking care of a lot of things.“From what I have seen here today, I’m impressed with the level of preparation and we have to equally thank the state government for its involvement in the burial, the government in this state has done well also,” Ngige said.

Ngige said every segment is ready for Ekwueme’s burial including the medical team, led by Prof. Igwegbe of Nnamdi Azikiwe Teaching Hospital, Nnewi. He said the people and groups were only tasking themselves for a successful transition of the former vice president.Anambra State governor, Chief Willie Obiano, has restated confidence in its committee set up to plan and coordinate activities towards giving Ekwueme a befitting burial.

Obiano told newsmen in Awka that the plan was imperative, stressing that the committee was enlarged to accommodate other members from the five South-eastern states and beyond, stressing that the deceased was a worthy son of Anambra and deserves a worthy burial.He described the late elder statesman as a father, whom he shared very intimate relationship with, stressing that his demise was a great loss to the state and the country.

A former Vice Chancellor of the Chukwuemeka Odumegwu University, Prof. Iheanacho Orajaka, has called for the renaming of the Federal Polytechnic Oko to Ekwueme University of Technology.Orajaka who is the chairman of the old Aguata Union Committee for the burial of the elder statesman, stated in his tribute that the former vice president should be immortalised.

Other dignitaries at the airport to receive the late vice president included the President General of Ohanaeze Ndigbo, Dr. John Nnia Nwodo; the Anglican Bishop of Enugu Diocese, Archbishop Emmanuel Chukwuma; the National Chairman of the United Progressive Party, Chief Chekwas Okorie; the Speaker, Ebonyi State House of Assembly, Ogbonnia Nwaifuru and members of the affected family. The governors took turns to pay their last respects to the late icon.