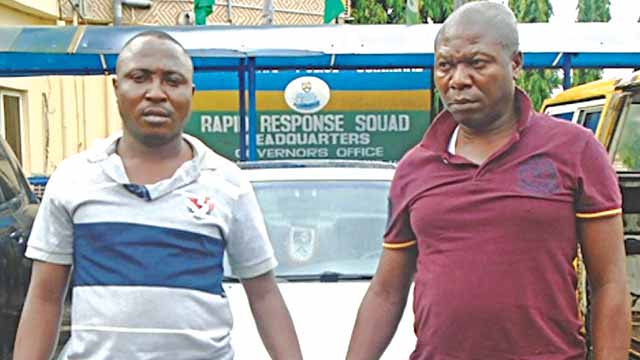 Two of the suspects 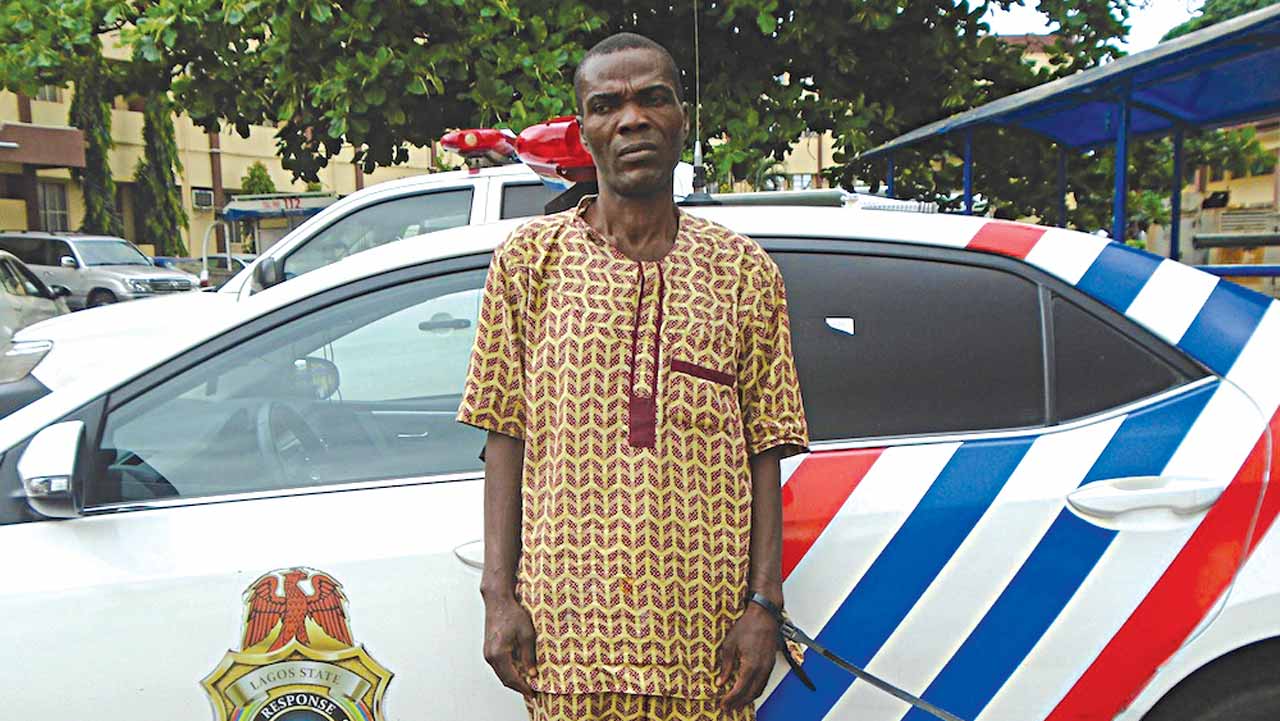 Another suspect
The operatives of the Rapid Response Squad (RRS) of Lagos State police Command have arrested four suspects for allegedly swindling members of the public of huge sums of money.

They were apprehended separately by the operatives in three cases of fraud in Maryland, Ojodu Berger and Ajegunle between Tuesday and Thursday last week.

According to one of the victims, Ibeh Chiwenu, she was going to Ojodu Berger from Ojota when Kenneth Umukoro, driving an ash colour Toyota Camry 1997 model with the Registration Number SMK 886 DK stopped at the bus stop to pick her.

She added, “The driver now pleaded that he wanted to take the new passenger to Custom’s Office on Mobolaji Bank Anthony Way, where his goods were seized. It was here that their story changed and I became the subject of their manipulation in connivance with a Customs agent and a pastor”.

She further explained, “under the pretext that the four of us should assist the man, whose goods were trapped with the Custom over export duties, they brainwashed me into releasing my ATM card and subsequent withdrawal of the last N9, 000 from my account.

“After this, the pastor prayed for me and told me to go home and get more money my family kept at home. All these happened last week.

Today, Thursday, my husband and I were standing at the Maryland Bus Stop. I saw the same Toyota Camry with the same number plate and a new driver, but beside him was the former driver that defrauded me, pretending to be passenger. I alerted RRS officers stationed in Maryland and they arrested them.”

The two other suspects, Joseph Onuoha and Ikechukwu Okeke were arrested separately but in similar circumstances on Tuesday and Wednesday respectively.

Onuoha disclosed to interrogators that he belonged to a fraud syndicate led by one man simply identified as Toronto, adding that their leader, who is now at large, trained over 40 of them to go out daily in search of would-be victims.

“When we hit jackpot, we share it into five parts. Toronto takes two parts. Two of us in a team share two and we would share the remaining part to others.

“At present, our office in Ajegunle has been busted by the police. Toronto, as I was told has relocated to somewhere in Surulere. Whenever we have issues with the police, he comes around to secure our bail”, he disclosed.

Responding to the development, the Police Public Relations Officer, Dolapo Badmos, a Superintendent of Police said that the police wouldn’t relent on their duties of making the state crime free but warned members of the public to be wary of suspicious dealings.

The four suspects have been transferred to the State Criminal Investigation Department (SCID), Panti.

Nigeria
TCN confirms shut down of national grid
40 mins ago
The Transmission Company of Nigeria (TCN) on Wednesday, said that the national grid has been shutdown following the industrial dispute by the two in-house unions in the company.
Nigeria
Naira gains after 2-day loss to dollar
46 mins ago
The Naira on Wednesday appreciated against the dollar at the Investors and Exporters window, exchanging at N429.38.
Nigeria
Ihedioha, others, advocate unity, reconciliation at Eyirieyi Obohia cultural festival
50 mins ago
Former Gov. Emeka Ihedioha of Imo has identified unity, love, peace and reconciliation as fundamental ingredients for nation’s growth and development.
Politics
PDP congratulates IBB at 81
54 mins ago
The Peoples Democratic Party (PDP) has congratulated former Military President, Gen. Ibrahim Babangida, on his 81st birthday.
Music
Nicki Minaj's "Super Freaky Girl" Could Bring The Magic Number On The Billboard Hot 100
2 hours ago
Onika Tara Maraj, popularly known as Nicki Minaj, has been giving hits back to back since her breakout song, Ludacris’s “My Chick Bad" where she had a guest verse. She’s known as the Queen of rap, and it appears no one is taking the crown from her anytime soon. Her fan base known as the…

Nigeria
Woman’s whereabouts unknown after alleged blasphemy in Bauchi
22 May
Irate youths in the Warji Local Council of Bauchi State are trailing a 40-year-old woman, (name withheld) who was accused of blaspheming against Prophet Muhammed.

Nigeria
Police parade 37 suspected cultists, armed robbers in Ekiti
22 May
The Police Command in Ekiti state, on Saturday paraded no fewer than 37 suspects arrested at different locations in the state for offences ranging from alleged armed robbery, cattle rustling, theft and cultism between March and May. The Police Public Relations Officer (PPRO), ASP Sunday Abutu, parading the suspects at the Rapid Response Squad (RRS)…

News
Police kill 10 suspected armed robbers in Delta
23 May
Delta State Police command, yesterday, stormed the hideout of dare devil armed robbery suspects, who have been involved in the killing of policemen and civilians recently in the state, and killed 10 of them.

Nigeria
Police appeal for calm as normalcy returns to Bauchi
28 May
Police Command in Bauchi on Saturday appealed to the general public to remain calm as normalcy is restored following the civil disturbance in Yelwan kagadama area of Bauchi metropolis. This is contained in a statement issued by the spokesperson of the command SP Ahmed Wakil  made available to newsmen in Bauchi. He revealed that there was…