We didn’t lose in 2018, we were intimidated, says Eleka
2 days ago  Politics

Ezekwesili: Unless we fix politics urgently, it will disintegrate and destroy Nigeria
1 day ago  Politics

There are indications that more Nigerians may be riding on the path of involving actively in voting ahead of the 2019 Presidential election to be held next weekend.

A survey captured by BioRegistra, a product of Seamfix, has identified over 1,666 people confirming their complete interest.

BioRegistra, a product of Seamfix, is a digitization tool that enables organizations to convert paper forms to robust digital forms, enhancing the collection of data for business processes. BioRegistra, as a digital form, nullifies the shortcomings of paper forms, especially the redundancy that they bring to business operations and overall productivity of fast-paced organizations. 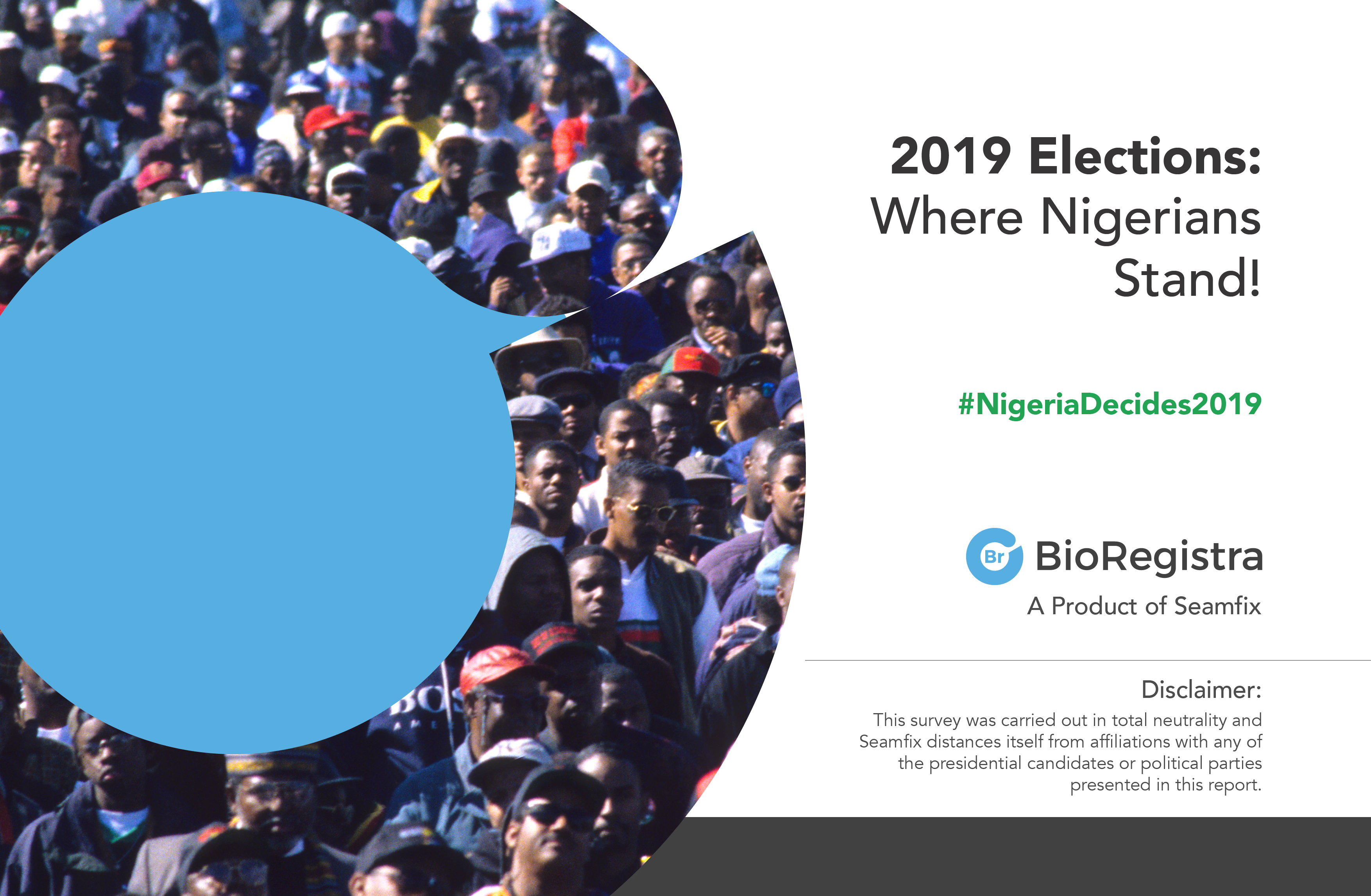 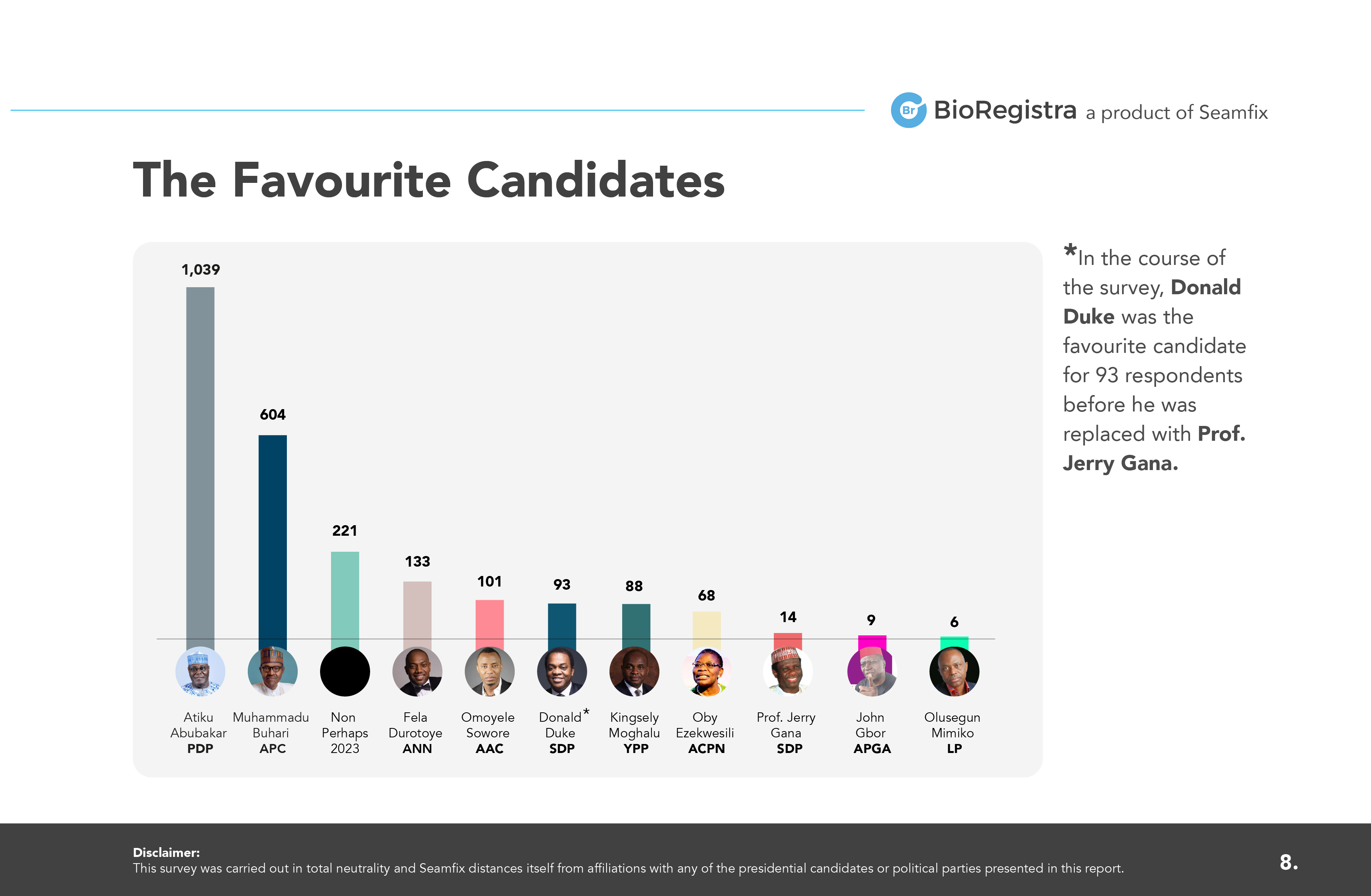 However, Seamfix is a one-stop KYC platform that provides solutions that enable organizations to seamlessly capture, onboard, verify and digitize identities of customers and their documents in real time. Our platforms include BioRegistra, BioSmart, iClocker, and Verified.ng. All of which are geared towards enhancing identity management.

According to the survey, “The last two months have seen us at Seamfix conduct a public survey to examine individual preferences as regards the presidential candidates and their expectations for the forthcoming 2019 elections.

“The survey ran from the 9th of November 2018 to the first week of January 2019. A total of 2,440 Nigerians from different states in the country filled the survey. For us, the results of this survey represents the general perception of Nigerians towards the 2019 elections.

How we went about it
“The survey was carried out online and offline. Online, twitter, LinkedIn and Facebook were the social media tools adopted for participation.

“Specifically, we used shareable digital forms on these platforms, powered by BioRegistra. Hence, we were able to reach individuals in multiple states in the country. Offline, agents were allocated to specific locations across the country to physically engage respondents to fill the online survey.

Who filled the survey
The survey further stated that, “Majority of our respondents were youths, who took 75.12 percent of the total population of respondents. Of those who took the survey, 3.07 percent were deemed ineligible to vote as they fell below the age bracket of 18.”

On voter’s card ownership, the survey noted that “respondents with a voter’s card outweighed those who didn’t. The figures from this statistic suggest to an extent that there may be more needed to be done in making the PVC registration as seamless and inclusive as possible.

“However, on voters card distribution, respondents without voter’s card is averaged 871, while those with voter’s card summed 1,569.”

Location distribution
Meanwhile, the survey reported that “about half of the respondents chose not to disclose their location in the survey. 1,020 of them chose to keep information on their location private. 1,420 gladly shared this information, from which we were able to measure participation by states.”

“However, a total of 167 respondents were totally uninterested in the elections; 112 of them because they believe elections are rigged; 56 because they don’t think any of the presidential candidates should be president.”

“Respondents hold stronger reasons to vote for a candidate, which is for a better Nigeria. While some still remain loyal to a party or candidate, a few others made their choice based on sentiments and tribe.”

Inquiring to candidates perspective on possibilities of selling their votes for 10,000 Naira, the survey explained that “The idea behind this particular question was to gauge the public’s willingness to accept bribes in exchange for their votes come 2019. While 51.71 percent of the respondents wouldn’t take the amount at all, 36.89 percent would not only refuse the bribe, they would also report the involved parties.

“On the other hand, 6.52 percent would take the amount but still vote for their preferred candidate. The remaining respondents who answered this question were definitely going to take a 10,000 Naira bribe or sell to the highest bidder if the opportunity presented itself.”

Also, major sectors Nigerians wants the next President to focus on was on projects in the education and power sectors, with transportation sector receiving the lowest votes.

What the survey tells us
“However, from our poll, it is quite evident that the two major parties remain strong favorites to win the presidential elections in 2019. Also, a number of Nigerians are either completely uninterested in the elections for one reason or the other or lack the required motivation to participate in the voting process.

“Although, it is worthy of note that a lot of respondents were generally interested in the elections, meaning that whether they eventually participate or not, they would be keenly watching to see the outcome of the 2019 presidential elections.”