By Sodiq Omolaoye, Abuja
Share on Facebook Share on Twitter Share on WhatsApp Share on Telegram
Thousands of stakeholders and supporters of All Progressives Congress (APC) in the six north-central states, including the federal capital territory, on Tuesday, staged a peaceful protest in Abuja over the appointment of Plateau State Governor, Simon Lalong as the Director General of APC Presidential Campaign Council.
1 of 10 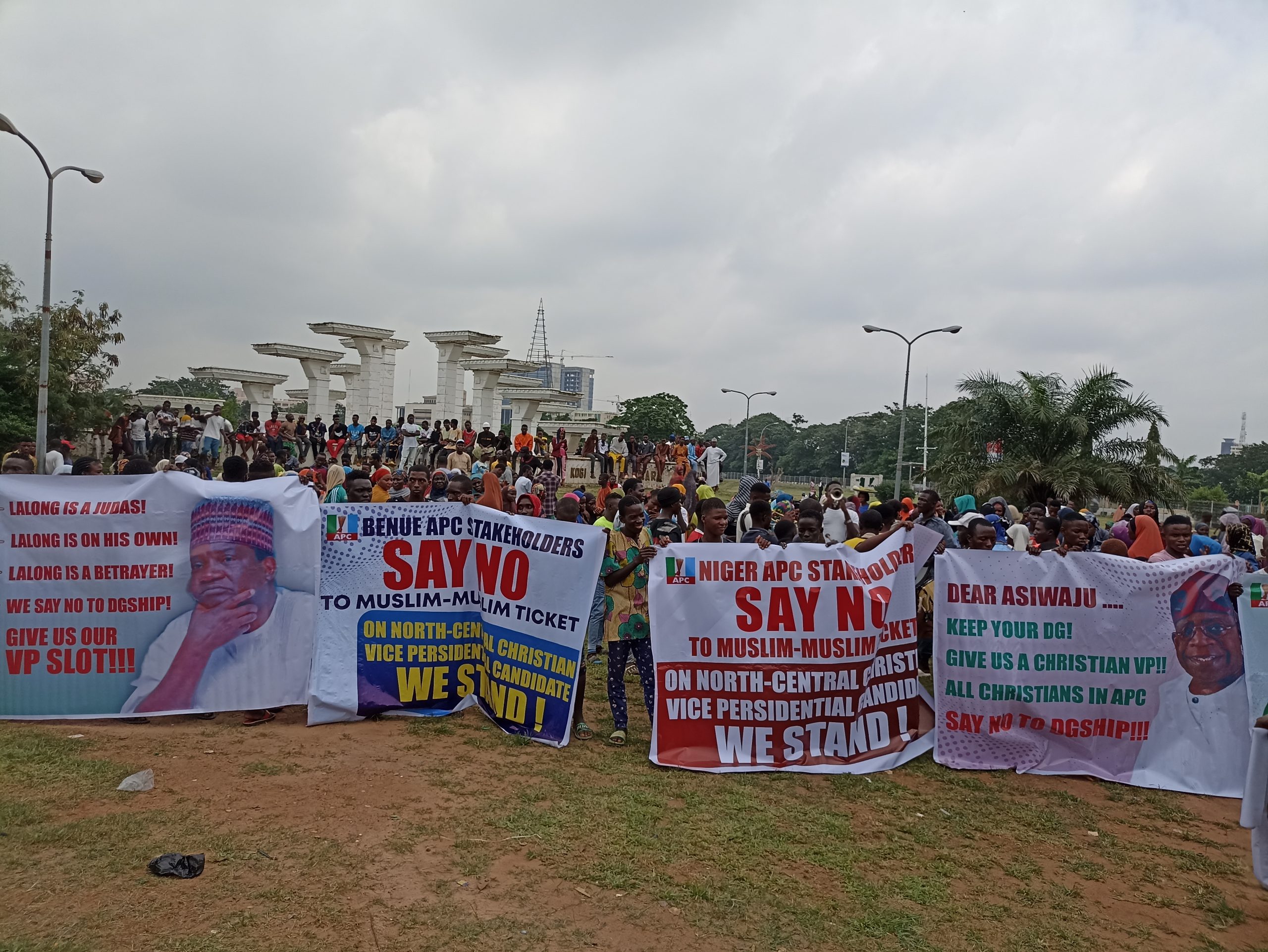 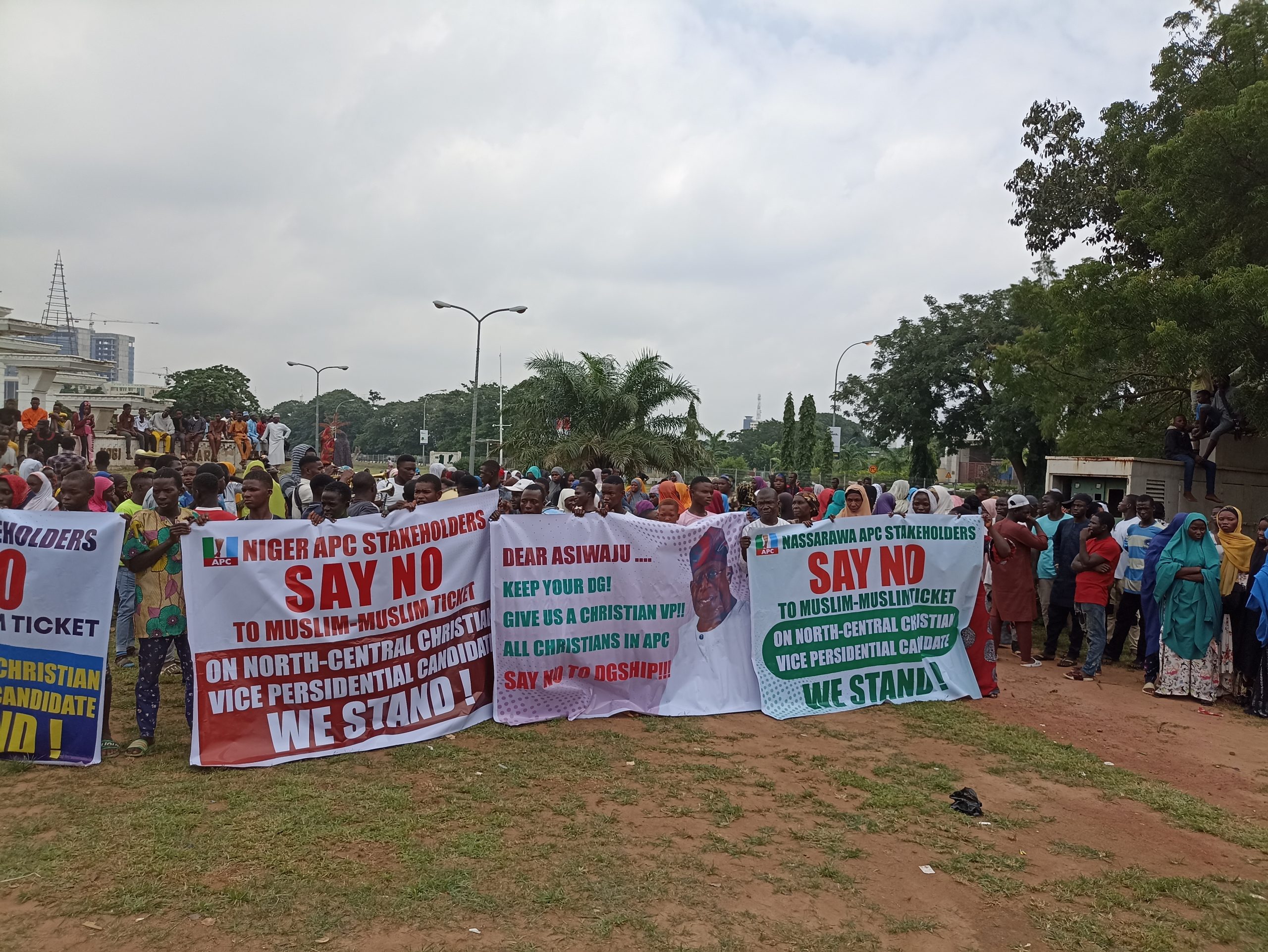 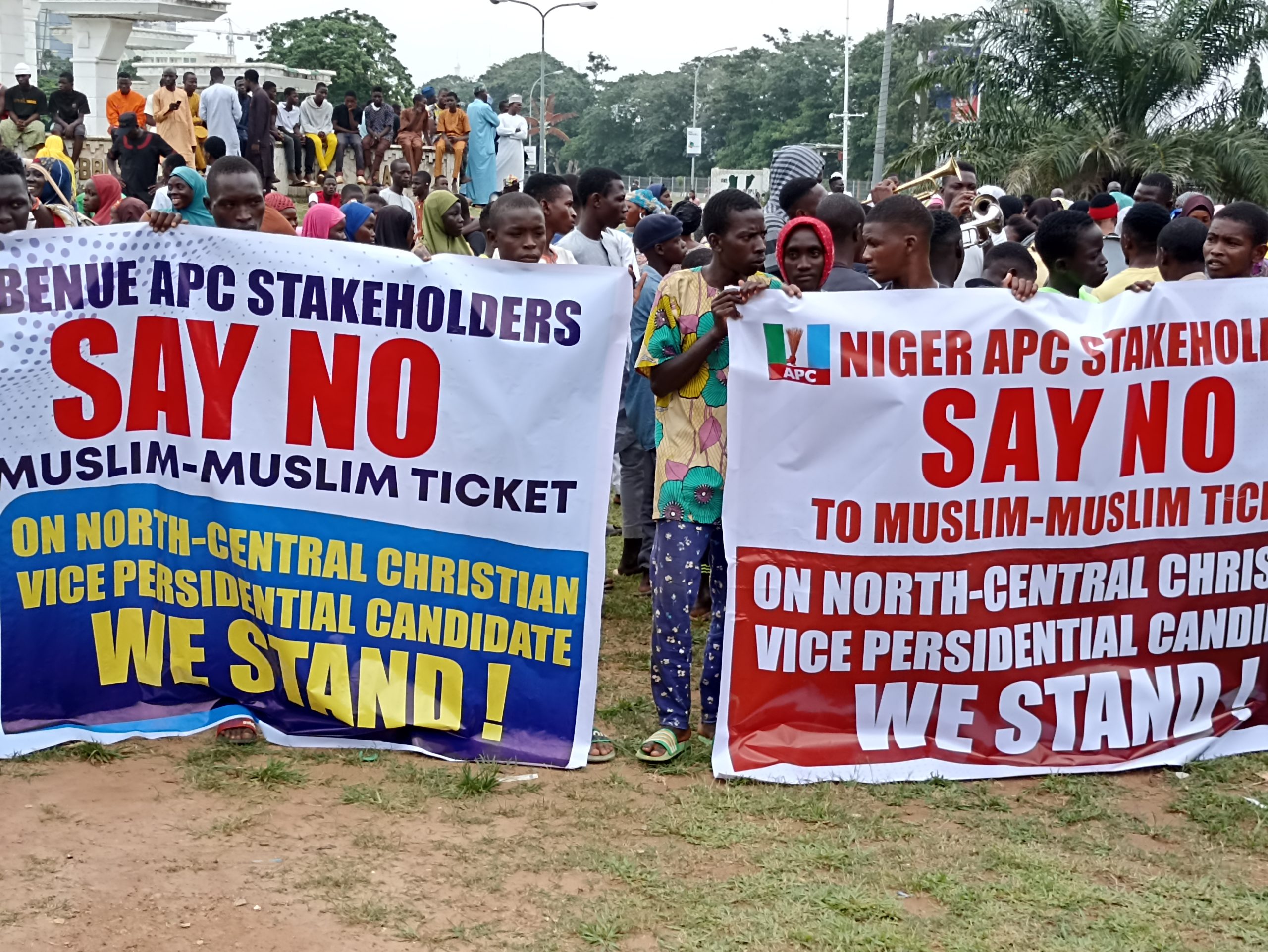 Thousands of stakeholders and supporters of All Progressives Congress (APC) in the six north-central states, including the federal capital territory, on Tuesday, staged a peaceful protest in Abuja over the appointment of Plateau State Governor, Simon Lalong as the Director General of APC Presidential Campaign Council.

The protesters under the aegis of APC North-Central stakeholders also marched to the Presidential Villa to submit a protest letter to the President over the Muslim-Muslim ticket adopted by the party.

The protesters held placards with inscriptions; ‘On North Central Christian vice presidential candidate we stand’, Lalong is on his own! ‘Dear Asiwaju, keep your DG. Give us a Christian VP.”

Describing the appointment of Lalong as campaign DG of the party as an insult to the north-central region, the stakeholders said they would only accept the position of the Vice president.

Speaking during the protest, the Leader of the group, Dauda Yakubu, said various indices at play so far within the party do not suggest that the Christians from Northern Nigeria are considered in the party’s scheme of affairs.

He recalled that the party had neglected advice from concerned stakeholders by nominating a Northern Muslim as the party’s vice presidential candidate.

According to him, stakeholders in the party especially northern Christians felt humiliated by the actions of the party’s leadership in recent times, which he said do not demonstrate ethnic and religious inclusion.

He urged President Muhammadu Buhari to clear his role and make his position known on the party’s same-faith ticket.

Yakubu said: “We feel the appointment of Governor Simon Bako Lalong as the Director General of the Presidential Campaign Council is an insult to our collective sensibilities as a devoted party faithful in North Central.

“Mr. President may wish to recall that in the annals of the party, the North Central zone has demonstrated an unalloyed commitment to the growth and development of the party. But what has the north central received in return?

“We came from near and far to witness first-hand the news making the rounds that you indeed sanctioned the Muslim-Muslim Ticket of our party. There have also been insinuations that the vice presidential ticket was not given to a Northern Christian because you Supported it.

“We know you to be an advocate of unity. ethnic and religious inclusion. But again, we are short of words with the news making the rounds: hence this open letter in a protest march to hear from you that you were indeed in support of a Muslim-Muslim Ticket.

“This is on the heels that as stakeholders of our party, we have consistently advocated for Governor Lalong as the party’s vice presidential candidate because he possesses all the necessary qualities. But to our dismay. he was appointed as the DG of the presidential campaign council.

“it is our considered position that the lines are not connecting for us as stakeholders of the party in the North Central zone of the country. And consequently, we demand explanations as to why our interests have been jettisoned using a yardstick that defeats common sense.”

Yakubu observed that the APC is the only party that didn’t consider the country’s religious sensitivity in the composition of its presidential team, adding that it is not on the strength of a lack of qualified and credible candidates.

Noting that something fundamental is wrong, Yakubu said the forum was convinced beyond doubt that President cannot sanction such a move by his antecedent as a unifier and an advocate of peace.

“Your fatherly disposition to all, regardless of ethnic or religious affiliations, has never been in doubt. You have been a great source of strength and support to all, and it is on record that you have treated all in the same manner since you assumed leadership of our great country.

“We know that you can’t be a part of religious exclusion under any circumstances; hence our presence here in Abuja through this peaceful protest to hear from you if you support the Muslim-Muslim Ticket of our party. At this stage, we cannot rely on rumours and hearsay because we know your pedigree as a father and mentor to all party members across the country. Mr President, it is our earnest desire that you, in your fatherly manner”, he stated.

He urged the party leadership to convoke an emergency meeting to reflect the wishes and interests of northern Christians in the composition of the presidential team of the party for the 2023 presidential elections.

World
Guinea opposition spurns talks with junta
41 mins ago
Opposition forces in Guinea on Monday spurned the ruling junta's offer of dialogue, accusing it of authoritarian rule and "unacceptable" violations of fundamental rights.
Nigeria
Why I want to be Kano governor: PDP guber candidate
1 hour ago
Muhammad Sadiq-Wali, the Kano State governorship candidate of the Peoples Democratic Party (PDP) says his main target is to restore the lost glory of the state, known as the centre for commerce.
World
Ebola death toll in Uganda climbs to nine
2 hours ago
The death toll from an Ebola outbreak in Uganda has risen to nine, the health ministry said Friday, two weeks after the authorities announced an epidemic in the centre of the country.
Nigeria
Yobe Deputy Governor loses 100-year-old brother
3 hours ago
Barde, who died on Sunday in Gubana village after a protracted illness, was the elder brother of Yobe Deputy Governor, Alhaji Idi Gubana.
Nigeria
We’re against violent agitation in Nigeria – Ohanaeze
3 hours ago
Ohanaeze Ndigbo, an apex Igbo social-cultural organisation, says the body is against violent agitation in any form because the group believes in the continued corporate existence of the country.

Nigeria
Rumpus in PDP over calls for Ayu’s removal, Wike’s ‘shabby’ treatment
30 Jun
Eight months to the 2023 general elections, the centre seems not to be firm in the opposition Peoples Democratic Party (PDP) as moves to oust its national chairman, Iyorchia Ayu, leaked yesterday...

Nigeria
Drama as Okorocha dares Lawan at plenary
30 Jun
A mild drama, yesterday, played out on the floor of the upper legislative chamber when the Senate President, Ahmad Lawan, switched off the public address system attached to Senator Rochas Okorocha...

Nigeria
Tinubu used ‘strange powers’ to clinch APC ticket – Prophet ShalomKelvin
30 Jun
Reverend ShalomKelvin Akinbo, the Head Pastor of Doers Nation International Church, in Akure, the Ondo State capital, has suggested that Bola Tinubu, the presidential candidate of the All Progressives Congress (APC), used “strange powers” to secure the ruling party’s ticket. Reverend ShalomKelvin, however, prophesised that the former Lagos governor will not be the one that…

Politics
Why I'll vote for Obi in 2023 - Imo APC chieftain, Agbaso
30 Jun
Former Deputy Governor of Imo State and chieftain of the All Progressive Congress, APC, Chief Jude Agbaso has given reasons he would vote the Labour Party Presidential candidate, Peter Obi in 2023 presidential election. This was as he flayed the All Progressive Congress, APC for failing to field its presidential candidates from the South East…

Friday Worship
NACOMYO urges Muslim youths to get PVC, elect credible leaders
1 Jul
The National Council Of Muslim Youth Organisations (NACOMYO), Lagos State Chapter, has said that voter apathy is a threat to the sustenance of good governance in the country.