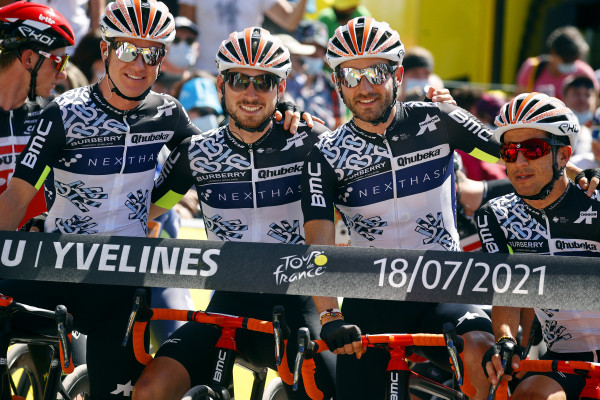 Wout Van Aert (Team Jumbo Visma) sprinted to the final stage victory of the Tour de France, on the Champs-Elysée in Paris. Tadej Pogacar (UAE Team Emirates) defended his title from last year and was crowned the overall race winner.

Stage 21, the final stage, of the 2021 Tour de France was again a true spectacle for the sport of professional cycling as the peloton made its way to the most famous finish-line in sport, on the Champs-Elysée in Paris.

For Team Qhubeka NextHash, the day held even greater significance as the team celebrated International Mandela Day at the Tour, as it has always done so on the 18th of July. This was the first time though that the final stage took place on the 18th and so, it was a true privilege to celebrate Mandela Day in Paris, with various orange accents added to our team livery.

The stage itself was an exciting affair as once the celebratory procession into Paris was complete, the peloton raced over 9 exhilarating laps around the Champs-Elysee. The stage came down to the expected mass sprint finish and Wout Van Aert showed he was the fastest of all, taking a fantastic victory.

Team Qhubeka NextHash did a great job to look after Max Walscheid for the finale, with our 4 riders (Simon Clarke, Carlos Barbero, Sean Bennett and Sergio Henao) working well to position Walscheid up on the wheels of the favourites in the final kilometre. Our German then went on to sprint home in 10th place on the stage.

“It’s been an incredible year and I am very happy to have finished my second grand tour. Today was extremely fast and chaotic in the final, as expected. I got great support, particularly from Simon (Clarke) and Carlos (Barbero). I am happy to have scored a top 10 for us, more could have been possible but that is cycling for you. I have been happy to have had good legs the last three days of the Tour and to finish with my 4 other teammates. We worked amazingly well together, we always gave our best and I just really liked the team spirit and morals we kept through the race.” – Max Walscheid

The 2021 Tour de France was a gruelling race, which saw many crashes and injuries affect numerous riders throughout. Unfortunately, Nicholas Dlamini, the first black South African to start the Tour de France, as well as teammates Victor Campenaerts and Michael Gogl did not make it to Paris this year. However, the team showed its Ubuntu spirit, and fought for each other and the purpose we race for, #BicyclesChangeLives all the way into Paris.

Team road captain, Simon Clarke, who himself crashed on stage 3 and suffered a fracture to the L4 vertebrae of his spine, reflected upon the team’s tour after crossing the line in Paris.

“We are all professional and hold ourselves to the highest integrity and that doesn’t come with excuses. So, today was another opportunity (with Max Walscheid) to prove that we are a team and show that Ubuntu is alive and kicking, and strong within our team no matter the circumstances.”

“They said I couldn’t, but I fueled my passion with their words.” - Zainab Aliyu - Founder of Aaboux
4 mins ago  Personality
Rihanna Is Now Officially A Billionaire And World's Richest Female Musician
14 mins ago  What's New
Tinubu is alive and healthy, says Sanwo-Olu
17 mins ago  Nigeria
Horror plunge made me stronger, says record-breaking Olympian Brown, 13
19 mins ago  Sport
No COVID-19 positive corps member in any orientation camps, says NYSC
51 mins ago  Nigeria