A Memorandum of Understanding on Development Cooperation Was Signed between the African Union Commission and Turkish Cooperation and Coordination Agency (T?KA)

By APO Group
Moussa Faki Mahamat, Chairperson of the African Union Commission (AUC), signed the Memorandum of Understanding on Development Cooperation between Turkish Cooperation and Coordination Agency (TİKA) and the AUC. Mahamat visited TİKA and had a meeting with Serkan Kayalar, TİKA’s President. In the meeting, Kayalar stated that Turkey has deep-rooted relations with Africa and that the… 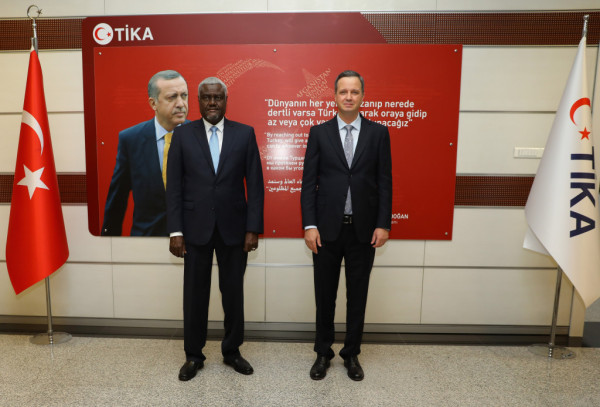 Moussa Faki Mahamat, Chairperson of the African Union Commission (AUC), signed the Memorandum of Understanding on Development Cooperation between Turkish Cooperation and Coordination Agency (TİKA) and the AUC.

Mahamat visited TİKA and had a meeting with Serkan Kayalar, TİKA’s President. In the meeting, Kayalar stated that Turkey has deep-rooted relations with Africa and that the improvement in these bilateral and multilateral relations gained momentum in every field with Turkey’s declaration of 2005 as the “Year of Africa”.

Kayalar said, “As the strategic partner of the African Union, Turkey ensures sustainable cooperation in every field based on mutual trust.” He added that the number of Turkish Embassies in Africa, which was 12 in 2002, reached 43 in 2021.

Kayalar noted that African countries were not indifferent to Turkey’s interest in the continent and that the number of the embassies of African countries in Turkey, which was 10 in 2008, reached 37. He added, “Today, Turkey is a major trade partner of many African countries. All our institutions are carrying out important activities in Africa as a result of the improving diplomatic relations under the strong leadership of President Recep Tayyip Erdoğan, the national leader who made the highest number of official visits to Africa. As TİKA, we opened our Ethiopia Office, our first office on the continent, in 2005. Now, we have 22 offices in Africa.”

“We believe in the future of Africa.”

Kayalar said, “We believe in the future of Africa. We sincerely share our country’s development experience in many fields and implement concrete projects that touch lives.” He also underlined that they have so far carried out nearly 7,000 projects and activities across Africa.

Kayalar stated that Mahamat’s visit added a new and strong link to the relations between TİKA and Africa, and that the new areas of cooperation that would emerge as a result of the signing of the memorandum of understanding would further strengthen their strategic partnership. He thanked Mahamat for his visit. Mahamat noted that they were in close cooperation with Turkey.

Stating that TİKA plays an important role in ensuring cooperation between Turkey and Africa, Mahamat said, “We want to improve our cooperation with countries outside Africa, such as Turkey.”

Opinion
Insurgency: Approaches to cease further firing!
1 day ago
Insurgency in Nigeria started precisely in the Northeast and it has already taken over the whole nation as at today with the ongoing attacks on military facilities
Nigeria
Gunmen kill 43 in Nigeria's troubled north
1 day ago
Gunmen from a suspected criminal gang attacked a village market in northwest Nigeria's Sokoto state, killing 43 people, the state government said Monday. Heavily armed gangs known locally as bandits have terrorised northwest and central Nigeria for years, raiding and looting villages, but attacks have become even more violent in recent months. "Forty-three people have…
Nigeria
Japanese government earmarks $260,000 to combat piracy, kidnapping in Nigeria, others
1 day ago
The Japanese government has earmarked 260,000 dollars in its bid towards combating piracy and kidnapping in the Gulf of Guinea (GoG).
World
Belgian police break up cocaine network, arrest 2
1 day ago
Belgian officials announced Monday they had broken up a cocaine smuggling gang, arresting 27 people in a series of raids during which they seized drugs, guns and luxury goods -- including horses.
Sport
Biennial WC to stop super clubs hogging money, says FIFA's Infantino
1 day ago
FIFA president Gianni Infantino said on Monday his controversial plans to hold a World Cup every two years will help spread the fund's football generates away from a handful of super clubs.

APO Press Releases
Football champion Didier Drogba appointed World Health Organization Ambassador for Sports and Health
1 day ago
Download logoFootball legend Didier Drogba was today announced as the World Health Organization's Goodwill Ambassador for Sport and Health. Drogba, from Côte d’Ivoire, will support WHO to promote the Organization’s guidance on the benefits of physical activity and other healthy lifestyles, and highlight the value of sports, particularly for youth. Mr Drogba, well known for…

APO Press Releases
Positive momentum in Central African Republic must be maintained
1 hour ago
The announcement last week of a unilateral ceasefire in the Central African Republic is among recent positive steps in the country, the top UN official there told the Security Council on Monday, urging continued support for peace and reconciliation efforts.  Mankeur Ndiaye, Special Representative of the Secretary-General and head of UN peacekeeping operation, MINUSCA, underlined the need to maintain “positive momentum” as the…