By APO Group
Share on Facebook Share on Twitter Share on WhatsApp Share on Telegram
Africa Oil Week (AOW) (www.Africa-OilWeek.com) 2021 received an overwhelming response on its inaugural day with participation from over 1500 attendees from around the world. The four-day event that kicked off yesterday at Madinat Jumeirah will conclude on 11th November. Held for the first time in the UAE, the event witnessed the attendance of more than… 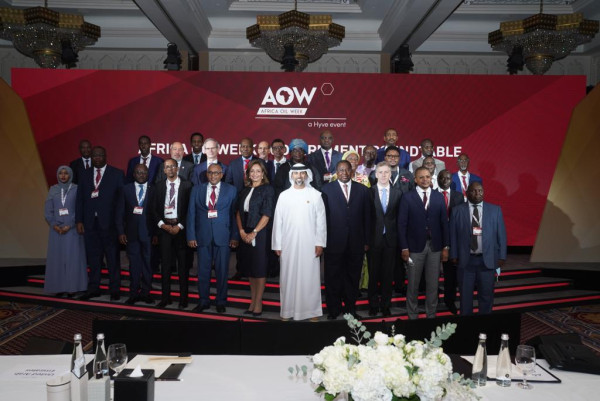 Africa Oil Week (AOW) (www.Africa-OilWeek.com) 2021 received an overwhelming response on its inaugural day with participation from over 1500 attendees from around the world. The four-day event that kicked off yesterday at Madinat Jumeirah will conclude on 11th November. Held for the first time in the UAE, the event witnessed the attendance of more than 30 heads of government departments from the African continent and the Middle East and high-level delegations including executives from some of the biggest global oil and gas companies.

Day one of the event was packed with numerous engaging conversations and networking opportunities. An exclusive Ministerial & VIP Symposium brought together stakeholders from across the energy value chain to host a progressive discussion around sustainable energy development for the continent and featured representatives from organisations including the African Union, AMEA Power, ENGIE Energy Access, The EITI, Wood Mackenzie, Africa Finance Corporation and Absa Group among others. The Symposium was attended by 26 Ministers including, Hon. Aïssatou Sophie Gladima, Minister of Petroleum & Energy, Republic of Senegal and Hon. Thomas Camara, Minister of Mines, Petroleum & Energy, Côte d'Ivoire.

The official Africa Oil Week opening ceremony featured Nicolas Terraz, President of Exploration & Production, TotalEnergies, in his first speaking engagement since his appointment, in conversation with Simon Flowers, Chairman & Chief Analyst, Wood Mackenzie on the future of the African upstream, and saw Hon. Minister Fafa Sanyang, Minister of Energy and Petroleum launch a mini-licensing round for block A1 for the Republic of the Gambia.

Promoting trade ties between the UAE and Africa

With the UAE’s investments in Africa reaching $5.64 billion in recent years, AOW will serve as a platform to fuel future collaborations and partnerships that can result in additional high-value deals in the energy sector. In a keynote address, H.E. Suhail Al Mazrouei, Minister of Energy and Infrastructure in the UAE, emphasised the UAE’s long-standing ties with African nations and highlighted the country’s position as an emerging global financial hub.

Al Mazrouei said, “Africa is one of the fastest-growing economies in the world. Additionally, the huge economic transformation in the energy sector in the continent, makes it ideal for investments from around the globe, especially the UAE and the Middle East. As a global benchmark in industrial development through the efficient use of energy resources, the UAE is a regional leader. We have a huge interest in the African market, and we see that the interest has been mutual, with Uganda recently signing new business deals across sectors, including renewable energy, at Expo 2020 Dubai. We are certain that Africa Oil Week will act as a platform to facilitate more such investments and forge greater partnerships between international investors and the African public and private sector. As a close partner of Africa, we hope to facilitate capital flow that will result in socio-economic development for Africa and the Middle East.”

Al Mazrouei added, “The Oil and Gas sector has seen unprecedented volatility since 2020 due to the pandemic. However, as the economy rebounds, we are witnessing recovery. Global economic growth for this year has remained strong, especially in the second quarter of 2021. In the UAE, moving forward to 2022, the Central Bank of the UAE estimates that the country will experience significant growth in terms of the GDP. It is evident to the world that oil and gas are significant sources of primary energy supply and strongly impact economic growth and the development of the industrial sector.”

Over the next couple of days, AOW will include a power-packed agenda with discussions on key topics like energy transition and energy access, policies and regulations in the market, green economy, ESG practices in the sector, onshore exploration, the role of digitalisation and technology in Africa’s future energy mix, opportunities, and challenges in the sector in the post-pandemic world, achieving a clean and competitive energy future for the continent, among others.

Bady Baldé, Deputy Executive and Africa Director, EITI stated, “Moderating the high-level ministerial panel discussion featuring top government officials from Africa was truly a privilege. The exchange of knowledge and ideas was insightful and engaging. Alongside transparent data, such dialogue is essential for the progress of the sector. We are positive that today’s discussions will prompt greater collaboration among African nations, and between Africa, the UAE and other Middle Eastern countries.”

Paul Sinclair Vice-President of Energy & Director of Government Relations at AOW said, “It encouraging to see the tremendous participation we have witnessed on day one, reaffirming Africa Oil Week as Africa’s market leading oil and gas event. The numbers showcase that there is a promise when we talk about the growth of the energy sector for Africa and the UAE. We are also overwhelmed with the support from our sponsors who have been instrumental in giving greater exposure to the event and furthering the progress of the sector.”

In addition to discussing the impact of digitalisation in the oil and gas sector, the event serves as an ideal platform for experts to design an economic blueprint for the development of the African energy sector. It will also help governments and key organisations to formulate their approach towards achieving a clean energy future for the continent, thus enabling the green economy transition.

Africa is currently home to 1.2 billion people, with an additional estimated population of 600 million below the age of 25 by 2050. The continent relies on the energy sector to power wealth creation, entrepreneurship, private sector expansion and industrialisation. Staying committed to the UN SDGs and the African Union Agenda 2063, the organisers of the Africa Oil Week also announced the Green Energy Africa Summit 2022 (GEA Summit) on day one of the conference. The new event will run alongside ‘Africa Oil Week’. The GEA Summit will focus on driving investments into low-carbon energy for Africa, by bringing together key stakeholders to facilitate innovation and dialogue, driving capital for the socio-economic development of Africa.

Distributed by APO Group on behalf of Africa Oil Week.

AMA Press Releases
« Waiting to see » almost killed me
9 mins ago
By Murielle E. Addis Ababa (Ethiopia), 29th November 2021 -/African Media Agency (AMA)/-I am Murielle. Former beauty queen. Executive. Mother of three. If there is one thing that characterises me at first sight, it is elegance. I’m always dressed to the nines, perched on high heels. I am the kind of woman you meet in…
Sport
Lionel Messi wins historic seventh Ballon d’Or
1 day ago
Lionel Messi has won a record seventh Ballon d'Or, beating Robert Lewandowski and Jorginho to the title. The forward inspired Argentina to their first Copa America title since 1993, ending his long wait for silverware at international level. He also lifted the Copa del Rey with Barcelona before joining Paris Saint-Germain last summer. Messi collected…
Nigeria
Police rescue soldier, 15 others abducted by insurgents
1 day ago
A team of policemen patrolling Maiduguri-Damaturu road, on Monday prevented the abduction of a soldier and 15 travellers by insurgents.
Nigeria
FG to decide on hazard allowance for health workers next week — Ngige
1 day ago
The Federal Government says it would make its final decision on the proposed new hazard allowance for health workers next week.
Nigeria
EFCC arrests 60 suspected ‘Yahoo boys’ in Ogun
1 day ago
Operatives of the Lagos Command of Economic and Financial Crimes Commission (EFCC) have arrested 60 suspected internet fraudsters during an award ceremony at Conference Hotel in Abeokuta, Ogun.

AMA Press Releases
« Waiting to see » almost killed me
9 mins ago
By Murielle E. Addis Ababa (Ethiopia), 29th November 2021 -/African Media Agency (AMA)/-I am Murielle. Former beauty queen. Executive. Mother of three. If there is one thing that characterises me at first sight, it is elegance. I’m always dressed to the nines, perched on high heels. I am the kind of woman you meet in…
APO Press Releases
Minister Gwede Mantashe announces adjustment of fuel prices effective from 1 December 2021
9 mins ago
Download logoThe Minister of Mineral Resources and Energy, Mr Gwede Mantashe, announces the adjustment of fuel prices based on current local and international factors with effect from the 1st of December 2021.    South Africa’s fuel prices are adjusted on a monthly basis, informed by international and local factors. International factors include the fact that…
APO Press Releases
Minister Thulas Nxesi submits International Labour Organization convention to deal with violence and harassment in workplace
9 mins ago
Download logoSouth Africa’s Employment and Labour Minister T.W Nxesi today officially handed over SA’s documents for registration and ratification with the International Labour Organization (ILO’s) convention dealing with violence and harassment in the workplace.  Minister Nxesi said the documents have been endorsed by the SA government and the instruments will now be submitted for ratification…

Nigeria
Police rescue soldier, 15 others abducted by insurgents
1 day ago
A team of policemen patrolling Maiduguri-Damaturu road, on Monday prevented the abduction of a soldier and 15 travellers by insurgents.