By APO Group
Former Nigeria star says competition can drive development; Amuneke encourages calendar changes to have positive impact on African football; Increasing global competitiveness is a key goal of the President’s Vision 2020-2023. Emmanuel Amuneke knows all about the power of football and its need to constantly evolve to meet the needs of the modern game. A… 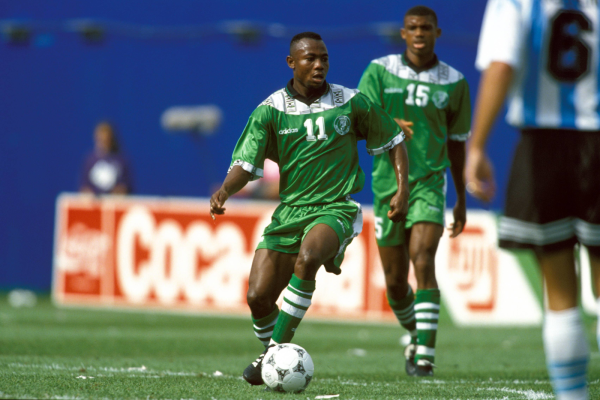 Emmanuel Amuneke knows all about the power of football and its need to constantly evolve to meet the needs of the modern game. A star of Nigeria’s run to the Round of 16 at the FIFA World Cup™ in 1994, he now wants a reform of the international match calendar to allow more players from Nigeria – and across Africa – to play on the highest stage.

Players have been asked for their input to a wide-ranging review on football’s future, with expertise also being sought from other stakeholders across the sport. Nothing is decided for the schedule after 2024 and FIFA has welcomed diverse views and a debate in order to optimise the calendar for all involved, giving a broader cross-section of the world’s talent the chance to shine.

“Football is continuously evolving and changing,” said Amuneke. “I think the only way we Africans can do better, is by going back and developing our players. It is true that we have a lot of great players playing in Europe, doing very well but, of course, we also have to think about those playing in the country, how we can aid them to become much better players and how we can develop them.

“I have always believed that in football, when a player is more knowledgeable about the game, his decision-making becomes much better. I think educating our young players and preparing them for the future is the key. Over the years, people have said ‘Africa is going to win the [FIFA] World Cup’ and I agree but we cannot win the World Cup just by talking. We have to develop the young generation and lay foundations for the young ones to be in a position to be able to compete.”

Amuneke notes the stress that global stars are under in terms of intercontinental travels and the needs for players to have rest periods in order to optimise the performance.

“I think that period of resting for the players is key,” adds Amuneke. “And in the calendar, if there is a way to fix that, it’s a welcome development that can aid the clubs and the national teams.”

World
Myanmar junta chief excluded from ASEAN summit
3 mins ago
Myanmar's junta chief will be excluded from an upcoming ASEAN summit, the group said Saturday, a rare rebuke as concerns rise over the military government's commitment to defusing a bloody crisis.
Nigeria
FRSC vows to impound vehicles without number plates
37 mins ago
The Federal Road Safety Corps, Ondo State Command, vowed on Saturday in Akure that it would impound vehicles without number plates and those with illegal registration.
World
Security review after British MP stabbed to death in 'terror' attack
52 mins ago
The fatal stabbing of British lawmaker David Amess was a terrorist incident, police said Saturday, as MPs pressed for tougher security in the wake of the second killing of a UK politician...
Sport
Slapfight Nigeria commences training for athletes, officials
1 hour ago
Organisers of the epic Slapfight Nigeria on Saturday said that there is an ongoing training session for athletes and official that will be participating in the inaugural combat sport.
World
France pays tribute to teacher beheaded over Mohammed cartoons
1 hour ago
France  paid tribute to schoolteacher Samuel Paty on Saturday, one year after he was beheaded by an extremist after showing his class cartoons of the Muslim Prophet Mohammed. Paty, 47, was stabbed and then decapitated after leaving the middle school where he taught history and geography in the tranquil Paris suburb of Conflans-Sainte-Honorine on the…

APO Press Releases
MEDIA INVITE: Update on ongoing Future of Women's Football consultation process
20 mins ago
Download logoFollowing the latest series of meetings, involving players, coaches and other key stakeholders from across the women’s game, media are invited to a virtual briefing on Monday, 18 October at 17:00 CET, to receive an update on the ongoing consultation process, as well as some of the current findings so far. Jill Ellis, two-time…

APO Press Releases
U.S. Embassy Chargé d'Affaires and USAID Country Representative participate in food distribution to commemorate World Food Day
20 mins ago
Celebration of the 42nd edition of World Food Day in Mandjou- Bertoua -East Region. On October 15, the Chargé d’Affaires a.i. of the Embassy of the United States, Mary Daschbach, and the Country Representative of the U.S. Agency for International (USAID), Paul Richardson, participated in a food distribution event for 1,083 refugees, organized by the World…
APO Press Releases
IMF Staff Completes Virtual Mission to Lesotho
20 mins ago
Download logoLesotho has been struggling with the fallout from the pandemic and a sharp decline in revenues from the Southern African Customs Union (SACU); The authorities and the mission team made significant progress in their discussions on policies that could be supported by the IMF under a financial arrangement. A team from the International Monetary…

APO Press Releases
Peace Corps Helps Launch Vaccination Campaign in Commune of Mantasoa
20 mins ago
With the support of the U.S. Peace Corps, the Mantasoa CSB II launched its COVID-19 vaccination campaign yesterday.  The campaign is providing free, Johnson&Johnson vaccines – a donation from the U.S. government – to approximately 4,000 community members in the 11 Fokontany of Mantasoa. “It’s great that we can provide vaccinations to the people of…
APO Press Releases
Minister of State Annen in North Africa
20 mins ago
Download logoMinister of State at the Federal Foreign Office Niels Annen will set off on a trip to North Africa today (16 October), with stops in Algeria, Tunisia and Libya. In Algeria, he will hold political consultations with government officials and will meet with representatives of civil society. His agenda also includes a visit to a…