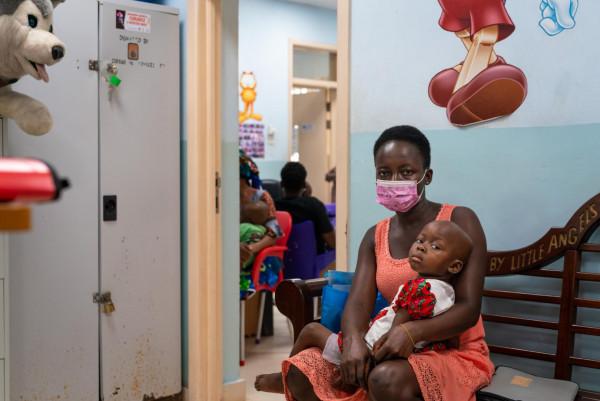 On one of Naomi Otua’s regular trips to visit her grandson James in the town of Assin Fosu in Ghana’s Central Region, she noticed something was seriously wrong. The 10-year-old’s eyes were jaundiced and he had lost a significant amount of weight. Worried, Otua decided to take James to the Suhum Government Hospital.

James was then referred to the Eastern Regional Hospital in Koforidua where he remained on admission for three weeks. But his condition continued to deteriorate, and he was eventually referred to the Korle-Bu Teaching Hospital in Accra, where he was diagnosed with Acute Lymphoblastic Leukaemia, the most common form of childhood cancer.

James is one of the approximately 400 000 children and adolescents who are diagnosed with cancer every year globally. In Ghana, about 1200 children under the age of 15 are estimated to develop cancer annually. In addition to leukaemia, lymphoma, retinoblastoma, Wilms’ tumour, soft tissue sarcoma and neuroblastoma are among the most common forms in the country.

Shortly after being referred to Korle-Bu and diagnosed, James began a course of chemotherapy, which he has continued for the past three months. “His condition has greatly improved,” says his grandmother Otua after almost six months of agonizing visits to different hospitals. “I am very happy about that.”

According to Professor Lorna Awo Renner, Head of the Paediatric Oncology Unit at the Korle-Bu Teaching Hospital, 80% of childhood cancers are curable. “But this is dependent on early detection and progressive treatment,” she says.

Although more than 80% of children with cancer live in developing countries like Ghana, only about 20% to 30% of them receive such treatment. This is often due to inhibitive costs. In Ghana, where cancer treatment is not covered by the National Health Insurance Scheme, the average expenditure for treating childhood cancer is about US $1000. In the treatment of Leukaemia, it can reach as high as $ 7000 for up to three years. This is far beyond the means of many Ghanaians.

“In Ghana, about 50% of patients used to abandon treatment halfway due to lack of funds. However, this figure has been reduced to 15% with support from a number of benevolent individuals and organizations,” says Professor Renner. In particular, World Child Cancer has helped to fund diagnostic investigations, purchase chemotherapy doses and cover the costs of transport and clinic appointments for numerous Ghanaian families.

Meanwhile, in September 2018, the World Health Organization (WHO) announced a new Global Initiative for Childhood Cancers, with Ghana among six countries selected to receive support for its implementation. “Working closely with the Ghanaian government, we have helped to build and sustain a high quality national childhood cancer programme with a target of achieving at least 60% survival rate by 2030,” says Dr Francis Kasolo, WHO Country Representative in Ghana.

Despite persisting resource constraints, health workers at Korle-Bu, who have received technical support in addition to monitoring and surveillance tools from WHO, go out of their way to ensure that their young patients receive optimum care. “Seeing the children smiling and playing makes us very happy. It’s a sign that they are getting better by the day and that the treatment is working,” says Leticia Amengor, a matron at the unit.

For Professor Renner, sending children back home once they’ve finally been declared cancer-free provides a great sense of fulfilment. She remains hopeful that James will soon be able to beat the disease. “These children can still go on to lead full lives,” she says, “I see it happen all the time.”

Distributed by APO Group on behalf of World Health Organization (WHO), Ghana.

Groups urge Buhari to confirm Dikio’s appointment
12 hours ago  Nigeria
Brown Skin Girl… And The Laurels Continue For Wizkid, Others
2 days ago  Music
New law to make Nigerians pay more for electricity underway
1 day ago  Nigeria
Watch: Wizkid And Wale Perform "Ojuelegba" Together On Stage
15 Sep  Music
Do You Know About The Spirituality Of Foods?
1 day ago  Guardian Life