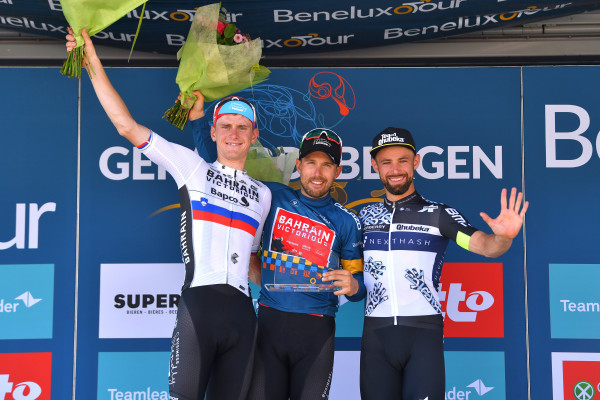 Victor Campenaerts secured third place in the general classification for Team Qhubeka NextHash (www.TeamQhubeka.com) after an exciting week of racing at the Benelux Tour. Sonny Colbrelli (Bahrain- Victorious) won the race overall, with his teammate Matej Mohorič placing in second.

The final stage of the race was won by Mohorič, with Colbrelli finishing in second place and Tom Dumoulin (Team Jumbo-Visma) taking third place.

“Today was a very hard race, and Casper Asgreen opened the race very early, but we did super well as a team. We were always in control. We had Reinie in the breakaway, and then we joined the breakaway (Asgreen, Mohorič, and me) and Reinie was there to pull- it was awesome. In the end, everything came together. While I had no result today, I ended up with third place in the GC, which I am very excited about. This was all about being committed as a team. It was a clear goal to focus on this GC and every single rider (and staff member) believed in this GC. We may not have won, but we are very happy with our podium place. Now, I will look ahead to the European Championships which are coming up. It was a nice week of racing in Belgium/Netherlands and also quite special, there was no rain! Ubuntu.“

“It has been a very hard seven days, but we have been in the race since day one with a dedicated team, including Victor in super shape. To pull off a podium here in the end, with two strong Bahrain riders is quite a big achievement for Victor and for the team. During the last stage, we made serious attempts to win the race, but Bahrain put in a strong race. With the help of Reinie, Gogl, Tanfield, and Stokbro on the last stage, we are really satisfied with this podium place.”

“It was a nice week with Victor being so strong. It was clear that he was going to be our leader for the GC and I think the podium in this race can really show itself off. I'm personally very happy. He is always seen as a time trialist, but I think he has made the transition to be a really good classics rider. The team performed well, especially today, with just five guys on the start line, it wasn't easy. But we managed well. Unfortunately, I had a mechanical in the last lap, but it all went well and I am happy for Victor and I am happy for the team. It was a good week.”

“We stuck together very well as a team, Victor was committed from the beginning, having come from a high altitude training camp. We, as a team believed in him, and I think from a very hectic first day to the last day today, he was at a good level, we supported him as much as possible, and he had a great pair of legs to finish on the podium.“