Campenaerts’ Tour de France comes to an end on Ventoux 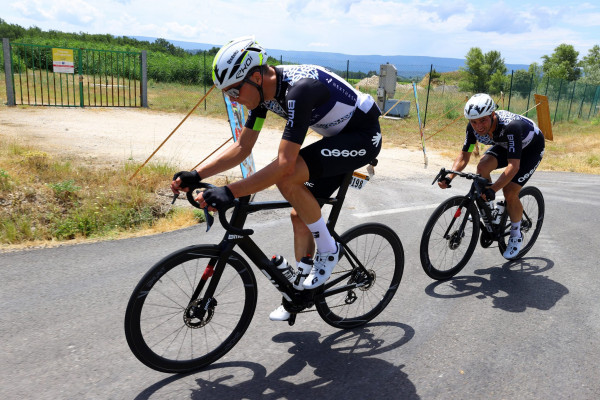 Stage 11 of the Tour de France was a tough test of 199km which also included two ascents of the famous Mont Ventoux, before descending to the finish in Malaucene. It was a fast start to the stage as nearly every team was hoping to get into the breakaway today.

After just over 50km of racing, finally the peloton allowed some riders to go up the road, and lead group of 16 riders had formed before the first of the two Ventoux climbs.

For Team Qhubeka NextHash it was always going to be a day of survival, a task which was unfortunately a step too far for Victor Campenaerts.

At the head of the race though, it was van Aert that proved to be a class above the rest. He was one of 7 remaining breakaway riders that reached the foot of the Ventoux for the final time, with a lead of 4'30″ over the yellow jersey group.

As the climb began, the Belgian simply rode away from everyone else and maintained his lead over the yellow jersey chase group too. He soloed to the line to take a brilliant stage win.

Today was a special day, it’s a special mountain anyway, and for me it’s the first mountain that I ever did on a bike, long before I was a bike rider, when I was 14 in 2006 I did it with my dad; and today on Mont Ventoux at the Tour de France my dad was waiting there to shout for me.

I’ve been having a difficult Tour and have been very tired, and I got in difficulties early on in the stage and some riders around me were abandoning but I wanted to continue to at least do Ventoux once to ensure I saw my dad. It was a nice moment to see him there at the top and then it was quite clear that he time cut was not realistic so we had an opportunity to stop and spend a moment together.

I started out this year at the Classics and then the Giro, followed by the Tour de France and racing in a very different way. I used to focus on the time trials which has it’s own peculiarities but this year I really tried to change the way of riding and not focusing on time trials anymore.

We race in the team in the spirit of Ubuntu – I am because we are – as one team. We’ve had some nice results, particularly highlighted at the Giro with three victories in five days and we tried to see where my limits are and that’s why we’ve had such a busy racing schedule. I always give it my all in every race that I start but I’ve suffered during this Tour and today I was just not able to stay in touch and so my race ends.

I want to wish all of my teammates the very best for the rest of the race and I’ll be behind them with every pedal stroke until Paris.

Bring On The Drama In Ankara
19 mins ago  Style
Now That Coronavirus Is Over (A Satire)
48 mins ago  On The Cover
Catch Up On Events From Last Week
1 hour ago  What's New
Voter apathy mars Lagos, Ogun polls
3 hours ago  Nigeria
Light shines on unconditional electronic transmission of election result
3 hours ago  Nigeria