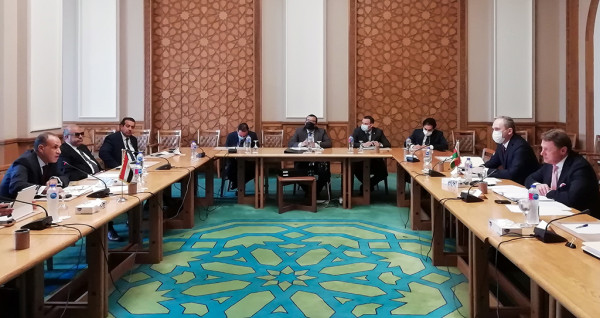 The consultations were also attended by the Deputy Ministers of Tourism, Supply and Internal Trade, Education and Scientific Research of Egypt.

The Sides discussed the entire range of issues on the Belarusian-Egyptian agenda, as well as regional developments.

The participants of the meeting noted the positive dynamics and results of the implementation of specific projects of industrial cooperation, discussed bilateral steps to promote contacts in the field of education, scientific, technical and humanitarian cooperation, improving the legal framework.

A special attention was paid to the issues of trade, economic, credit and investment cooperation of the two countries. The agenda of the next meeting of the Belarusian-Egyptian intergovernmental commission, as well as the modality of holding the third Belarusian-African economic forum were discussed.

The Sides stressed their readiness to carry out further active interaction and provide mutual support in the international organizations.

During his visit to Cairo, the Deputy Minister of Foreign Affairs of Belarus also met with First Deputy Minister of Trade and Industry of Egypt Ahmed Maghawry Diab, Assistant Secretary General of the League of Arab States on political issues Khalil Ibrahim Al Thawadi, Secretary General of the Federation of Egyptian Chambers of Commerce Alaa Ezz, Chairman of the Egyptian part of the Belarusian-Egyptian Business Council Ahmed Kelani, Chairman of the Egyptian Council for Sustainable Development Motaz Raslan, as well as with representatives of Egyptian business.

Distributed by APO Group on behalf of Ministry of Foreign Affairs of the Republic of Belarus.

Sport
Slapfight Nigeria commences training for athletes, officials
14 mins ago
Organisers of the epic Slapfight Nigeria on Saturday said that there is an ongoing training session for athletes and official that will be participating in the inaugural combat sport.
World
France pays tribute to teacher beheaded over Mohammed cartoons
31 mins ago
France  paid tribute to schoolteacher Samuel Paty on Saturday, one year after he was beheaded by an extremist after showing his class cartoons of the Muslim Prophet Mohammed. Paty, 47, was stabbed and then decapitated after leaving the middle school where he taught history and geography in the tranquil Paris suburb of Conflans-Sainte-Honorine on the…
World
Bali earthquake kills three, injures seven
49 mins ago
Three people were killed Saturday when an earthquake struck the Indonesian tourist island Bali, the disaster agency said.
Nigeria
NSCDC arrests herder for attacking farmer in Kwara
1 hour ago
The Nigeria Security and Civil Defencnn,,ke Corps (NSCDC) has arrested one suspect, Bugi Juli, said to be a herder, for attacking a farmer, Abubakar Sulade, 16, with a machete. This is contained in a press release, signed by the Command Spokesman, Mr Babawale Afolabi, and made available to the News Agency of Nigeria (NAN) on…
World
NASA launches Lucy probe to explore Jupiter asteroids
1 hour ago
NASA launched a spacecraft called Lucy on a 12-year mission to explore Jupiter's Trojan asteroids for the first time on Saturday, gathering new insights into the solar system's formation. The Atlas V rocket responsible for propelling the probe took off at 5:34 am local time (0934 GMT) from Cape Canaveral. Named after an ancient fossil…

APO Press Releases
Top 50 Women in Corporate Africa Revealed after Data-Driven Research
11 hours ago
In a major virtual summit with over 1,000 high level attendees, Africa.com revealed the names of the 50 most senior women in Corporate Africa. The Africa.com Definitive List of Women CEOs is distinguished in that it is data-driven. The researchers started by working with data provided by Bloomberg, and evaluating the over 1,400 companies listed…
APO Press Releases
UNMISS, Ministry of Gender, Child and Social Welfare hold workshop in Juba on providing services to communities
11 hours ago
Download logoThe United Nations Mission in South Sudan (UNMISS) recently partnered with the State Ministry of Gender, Child and Social Welfare, in Central Equatoria, to host a day-long, consultative workshop for development partners who work on delivering services to citizens of the state. The forum’s main aim: To give stakeholders insight into the strategic planning…
APO Press Releases
Unlocking the potential of Africa's free trade area for rural women
11 hours ago
Download logoThe Food and Agriculture Organization of the United Nations (FAO) Regional Office for Africa has launched a new brief that advocates for seizing the opportunities of the African Continental Free Trade Area (AfCFTA) for the economic empowerment of women in agriculture. The publication is launched today to coincide with the International Day for Rural…