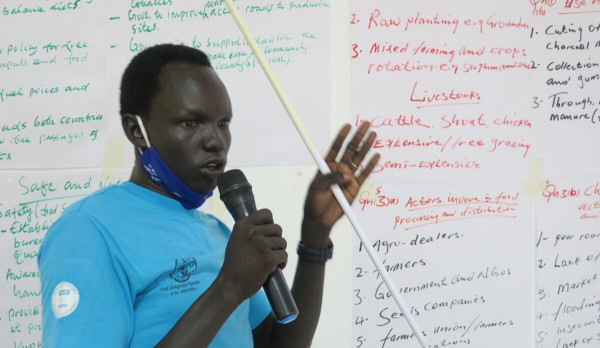 The directors of agricultural departments of the five counties of Northern Bahr-el-Ghazal have urged their government to fight and control diseases and pests affecting crops in the state. The most notable enemies are reportedly white grubs, termites and millipedes.

“They are the major destructive forces, although our own cattle are also destroying our crops,” said William Wany, the Director of Agricultural Department in Aweil West, one of 35 people participating in a two-day dialogue forum aimed at raising awareness on food and nutrition security through sustainable nourishment production systems.

The event, bringing government officials and civil society organizations together, was supported by the United Nations Mission in South Sudan (UNMISS), the World Food Programme (WFP) and other UN agencies hoping to boost food production in the country.

“I think the long-term idea for development is resilience at the community level rather than at household level. If the Minister for Agriculture can initiate an enterprise within the ministry to deal with small, medium, or large-scale mechanization at a subsidized cost it would greatly help farmers produce more food,” said Salomon Tilahun, Acting Head of WFP in Aweil.

Agriculture is the key economic sector in South Sudan, and what people eat greatly influences their health. For farming to work properly, many factors need to be aligned.

“I learnt how inadequate our system is. Policies are not implemented, the market system is weak and our road infrastructure is poor, leading to high transportation costs. These are some of the challenges we face to sell our products,” said Gabriel Wek, representing the Agricultural Department of Aweil North.

In fact, the manners of producing and distributing food are linked not only with food (in)security but also with the erosion of soils and arguably the biggest issues of our time: climate change.

“In my area the rain was delayed by more than one month. And when it rains it pours heavily and causes floods. These rapid changes are very challenging for us farmers,” said Garang Mayen from Aweil East.

Among other products, farmers in Northern Bahr-el-Ghazal State grow vegetables, sesame, rice, groundnuts and sorghum, with the latter being the number one cash cow. Some 8,000 metric tonnes per year are taken to the capital Juba to be sold.

“We have seen that this state has many agricultural advantages, including vast areas of arable land, an abundance of labour and more than sufficient water. What is necessary is to find ways of using the water and other resources wisely,” pondered Jane Alao, a Protection, Transition and Reintegration Officer serving with the UN peacekeeping mission.