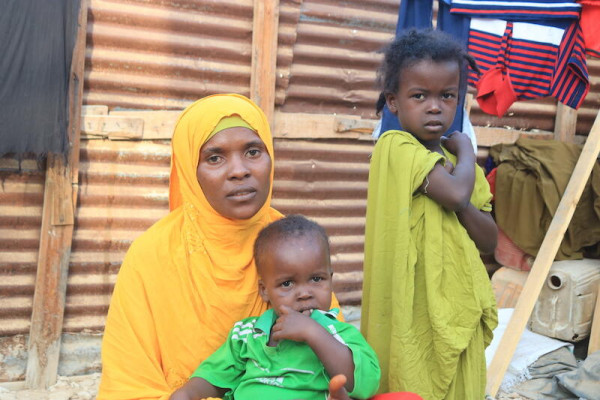 It has been over seven years since Ayan Muude Adawe moved to the coastal town of Bossaso in north-eastern Somalia’s Puntland region after fleeing drought in Ethiopia. Adapting to life there was a daily struggle but the impact of Cyclone Gati, which hit Somalia last November, tested the limits of her resilience.

The tropical storm, which was the country’s strongest on record, made landfall in Puntland’s Bari region where Bossaso is located on 22 November, bringing two years of rainfall in just a few days. It left at least nine people dead and affected over 180,000 others.

“I was never prepared for such a devastating storm,” said Ayan. “The flood water destroyed our shelter and washed away our belongings. We were evacuated the following morning, but my four-month-old son got sick and died the next day. He was cold and unable to breath.”

Extreme weather events like cyclones used to be a relatively rare occurrence in Puntland, but as climate change disrupts weather patterns, they have become more frequent and now happen almost yearly. Across Somalia, communities already worn down or displaced by the country’s decades-long internal conflict, are facing disaster upon disaster with little time or resources to recover in between. Flooding caused by too much rain often alternates with drought caused by too little.

Last year, cyclones and floods displaced more than 1.3 million Somalis, according to UNHCR, the UN Refugee Agency, outnumbering those displaced by drought or conflict. This year, many areas of the country are experiencing extreme dry conditions and water shortages while others have been hit by heavy rains and flash floods.  Between January and June, 68,000 people were displaced by drought and another 56,500 by floods. This was in addition to 359,000 forced to flee conflict and insecurity, according to UN figures.

“The causes of displacement are multi-faceted,” said Johann Siffointe, UNHCR’s representative in Somalia. “Last year, most of the displacements we recorded were primarily related to climate, but it is difficult to separate climate-related displacement from Somalia’s insecure context.”

The number of internally displaced people in Somalia has now grown to some 2.9 million with the vast majority living in over 2,000 camps scattered across the country. Most are makeshift settlements built on private land where residents live in dismal conditions with the constant threat of eviction.

Ayan lives in one such settlement close to the seashore in Bossaso, which is host to over 144,000 displaced people, driven there from other parts of the country by conflict and natural disasters.

The settlement is prone to floods but its proximity to the town centre provides job opportunities that those living there depend upon.

“I was displaced several times by heavy rains, but I kept on returning to this camp because I want to be closer to an area where I can find a job,” said Ayan, who has two remaining children.

Before she fled Ethiopia, Ayan was a farmer in the Somali region. She grew maize, sesame and vegetables until recurring droughts forced her to cross the border into Somalia.

She now ekes out a living washing clothes for families in the nearby town.

“I cannot do farming here. I simply don’t have the land and resources to do so,” she said. “I depend on doing menial jobs such as washing clothes to put food on the table for my children. I sometimes get something and many times I don’t.”

A similar situation is playing out for displaced people living in settlements in cities across the country. They provide cheap labour in the informal sector, but they are vulnerable to abuse, eviction and being repeatedly displaced by floods and storms.

UNHCR, together with other humanitarian agencies, works closely with the government to provide basic services to displaced people, including shelter, health care and education. In the aftermath of Cyclone Gati, UNHCR airlifted relief items to hard-hit areas in Bari region to support those like Ayan who were impacted by the disaster.

But resources are overstretched and there is concern that unpredictable weather patterns caused by climate change are worsening conditions for already vulnerable and displaced people.

Last year’s flooding has contributed to desert locust infestations that have destroyed crops, and the outlook for the rest of this year is even grimmer. The UN has predicted that the COVID-19 pandemic combined with climatic shocks and desert locusts will plunge more than 2.8 million Somalis into extreme food insecurity by September 2021.

UNHCR is working with the government and other partners to support communities to better withstand climate-related shocks when they happen.

“In addition to emergency life-saving responses, UNHCR strives to build the resilience of individuals to withstand re-occurring shocks,” said Johann Siffointe of UNHCR. “For example, we provide livelihood and education programmes, and currently in Bossaso, we are working with our partners to relocate vulnerable persons from a flood-prone settlement for internally displaced people, to a secure site where they will be provided with transitional shelter.”

“We are appealing for US$1.09 billion this year for the humanitarian response and we only have US$20 million pledged for flooding and long-term mitigation, and so there is a big gap between short-term implementation and long-term thinking around solutions.”

Ayan has mulled over returning to Ethiopia as conditions in Bossaso become tougher. “I think I would go back if I had money to buy proper equipment for my farm,” she said. “Even though the drought can also return anytime and now we are facing locust invasion.”