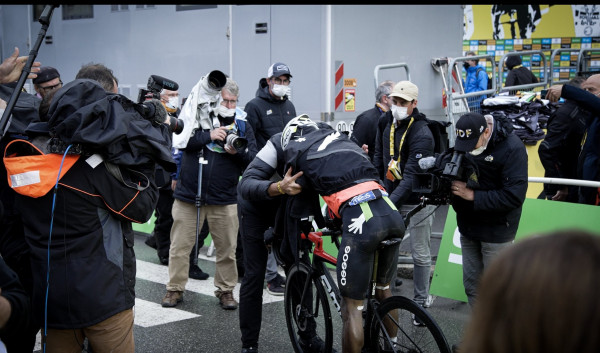 Stage 9 of the Tour de France was always going to be an incredibly tough stage as there was almost zero flat kilometers in the 144km stage, which had a summit finish to Tignes.

Minding the fact that the riders have already dealt with 8 consecutive days of tough racing, today was made that much more treacherous as the peloton had to deal with a torrential downpour, from start to finish.

For Team Qhubeka NextHash, and for many other teams, it was purely a day of survival. After the first major climb of the stage there was less than half the 170 rider remaining at the front of the race. A brief slowing by the yellow jersey group allowed most riders to come back and a break to go clear up the road.

Ben O'Connor, Nairo Quintana and Sergio Higuita proved to be the strongest for most of the day, until the two Colombians faded on the final climb and O'Connor soloed to a magnificent victory.

Back down the road, there were small groups of riders all over the Alps. The descents were just about as difficult as the climbs, as the cold rain made it difficult for riders to brake, some even stopping to change into dry clothing.

Unfortunately Nicholas Dlamini was a victim to one of the fast descents and crashed while riding in the grupetto. It was a long a lonely battle for Dlamini from that point, as the race rode away from the 25-year-old South African.

While the rest of the Team Qhubeka NextHash riders would finish within the time limit, Victor Campenaerts by only 7 seconds, Dlamini would not make the time cut.

The young South African crossed the line 1hr 24mins after O'Connor, to huge applause as onlookers admired the courage shown by Dlamini to not give up.

It was a hard stage and there were some honest climbs; the nature of the stage and the weather didn’t make it easy. It was just a bad day to have a bad day. I was already unlucky to also crash and lost contact and after that I was on my own, so it was really difficult to just ride a good pace and get to the guys on my own.

I would have loved to finish the race but it is sad to finish this way but for me the most important thing was not to stop and ride until the finish regardless of being out of the time limit. It’s a special race and it’s always been a dream of mine to ride the Tour de France and I think just getting off my bike and into a car wouldn’t be an option.

I’m glad that I  finished even though I finished an hour and half from the winning time – it was hard, bad day.

I’d really like to thank everyone for the great support, from when the Tour started up until this point. The support has been amazing and that was the reason that I wanted to really finish today and not get off my bike and into a car.

This is a race that I wanted to honour, and honour my dream. It was my first Tour de France and I knew it would be hard but I’ve honoured that dream; I am disappointed but at this point there’s not much I can do.