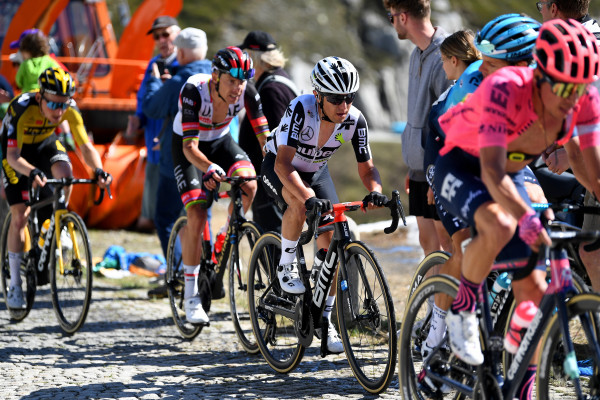 The final stage of the Tour de Suisse was one last very difficult stage in the Swiss Alps, with an ascent of the famous Gotthard Pass being the last major test for the UCI World Tour peloton.

A fast start saw a big early break go clear, but all attackers would be caught on the foot of the Gotthard Pass, a 12km climb that peaked over 2000m altitude with a road surface that is primarily cobbled.

Team Qhubeka ASSOS worked well to look after Pozzovivo ahead of the final climb, with local rider Kilian Frankiny seen doing a lot of work at the front of the peloton for his Italian teammate.

Ineos Grenadiers set the pace on the climb, which saw the main group whittle down drastically, but Pozzovivo never seemed to be in difficulty at any stage. Even as the attacks from the favourites came near the top of the climb, Pozzovivo was equal to his competitors and summit-ed the climb with 6 others, including the yellow jersey while Mader and Michael Woods were a few seconds ahead.

A fast 15km downhill followed to the finish in Andermatt, where Mader took a good stage win. Pozzovivo's group of favourites came in just 9 seconds down, with the Italian crossing the line 8th on the stage.

In the final overall standings, Carapaz claimed the victory while Pozzovivo rode away with a good 6th place. Following on from his 11th place at the Giro d'Italia last year, this is now Pozzovivo's best World Tour result since his life-threatening crash in 2019. A remarkable achievement by the 38-year-old.

Domenico Pozzovivo
“I am happy with the result of 6th place at the Tour de Suisse. It was disappointing to crash out of the Giro this year, with the good form I believe I had but was not able to show it. The Tour de Suisse has been a confirmation of my shape, which I am very happy about. Thank you to the team for the support this week.”