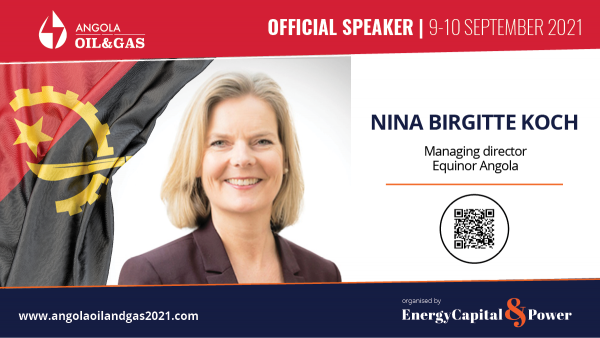 Equinor's Executive Leaders, Paul McCafferty-Senior Vice President Exploration & Production International Africa and Nina Koch, Country Manager for Angola, will provide essential insights on their exploration experience in Angola's energy industry at Angola Oil and Gas Conference (AOG) 2021 Conference; AOG 2021 is the most highly anticipated energy event in Africa in 2021; Organized by Energy Capital & Power (www.EnergyCapitalPower.com) under the auspices of the Ministry of Mineral Resources and Petroleum, AOG 2021 is committed to accelerating Angolan energy progress in the wake of the COVID-19 pandemic.

Equinor’s Executive Leadership, represented by Paul McCafferty, Senior Vice President Exploration & Production International – AFRICA, and Nina Koch, Equinor Angola’s Country Manager, have been confirmed as speakers at the Angola Oil and Gas (AOG) 2021 Conference, taking place at Luanda's Centro de Convenções de Talatona on September 9-10. Both leaders are expected to foster intense discussions on Angola's offshore production fields and deep dives into the current and future investment needs for the energy industry in Angola and the continent as a whole.

They will also drive critical discussions based on Equinor's 30 years of experience in Angola's oil and gas industry – the most significant oil production contributor for the company outside of Norway.

“Companies like Equinor demonstrate Angola's capability to continue to attract investment within the energy industry and we are thrilled to have Equinor's Executive Leadership team at AOG 2021 to share their valuable experience in this crucial market in Africa,” states João Gaspar Marques, International Conference Director for Energy Capital and Power (ECP), the organizer of the AOG 2021 conference.

Equinor is one of the first oil and gas companies to embrace the global energy transition. Over three years ago, the company revamped its worldwide branding and strategy to develop new growth options beyond its domestic market. Equinor's decarbonization goal is to reach net-zero emissions by 2050. The company launched a series of initiatives including reducing emissions from the production of oil and gas; increasing investment in renewable businesses; building low carbon markets, value chain, and industries; and actively supporting the Paris agreement and other net-zero initiatives.

According to Equinor, from the proven reserves of 364 million oil barrels in 31 fields across North, West, and Central Africa, 26 are in Angola, with new fields that will position Angola as an international growth market for Equinor. The company pioneered the pre-salt exploration initiative and reaffirmed its commitment to continue to operate in Angola for the next 25 years, maintaining participation on current blocks and investing in future offshore projects.

AOG 2021 is the most highly anticipated energy event in Africa in 2021. The conference is an exclusive, transformative, and sector-advancing platform for networking, deal-making, and investment partnerships that will drive Angola's energy sector growth and success. Organized by ECP and under the auspices of the Ministry of Mineral Resources, Oil and Gas, AOG 2021 is committed to accelerating Angolan energy progress in the wake of the COVID-19 pandemic.

Groups urge Buhari to confirm Dikio’s appointment
1 hour ago  Nigeria
Brown Skin Girl… And The Laurels Continue For Wizkid, Others
2 days ago  Music
New law to make Nigerians pay more for electricity underway
1 day ago  Nigeria
Watch: Wizkid And Wale Perform "Ojuelegba" Together On Stage
15 Sep  Music
Do You Know About The Spirituality Of Foods?
1 day ago  Guardian Life