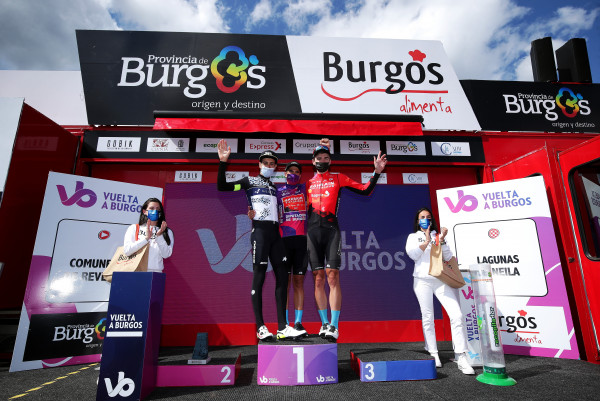 Team Qhubeka NextHash took to the start of the final Vuelta a Burgos stage without Domenico Pozzovivo and Sander Armee, this was after both riders crashed during yesterday's stage. Armee is expected to make a rapid recovery from his injuries but Pozzovivo suffered a fracture of the knee.

It was heart-breaking to see Pozzovivo leave the race while in such excellent form and his Vuelta a Espana challenge now lost too, before it even began, but with Fabio Aru starting the final stage in 4th overall our South African team still had a lot to race for and our 4 remaining riders delivered in a big way.

The final 146km stage finished up the 12km climb to Lagunas de Neila, well-known for its brutal gradients over the last 3km to the line. An early break did animate the first part of the race, but it was always going to be caught on the climb and the stage & GC would be decided by the strongest climbers.

Reinardt Janse van Rensburg, Bert-Jan Lindeman and Dylan Sunderland did a fine job looking after Fabio Aru right up until about the 7km to go marker for Team Qhubeka NextHash. Team Bahrain Victorious then set the pace coming into the hardest part of the climb, and this put the race leader, Romain Bardet (Team DSM) into difficulty.

Aru was riding strong in the wheels of Bahrain though, as the group quickly whittled down to just the top 20 climbers in the race. Padun was the first of the GC men to make a move, but Ineos Grenadiers gave chase with Egan Bernal and Pavel Sivakov.

Riders were aptly greeted with a “Welcome to Hell” sign painted on the road as they began the final steep 3km stretch. From here it was very much, every man for himself. There were numerous attacks and surges in pace, but Aru rode an intelligent final climb with a top GC placing his goal. Always in the top 10 positions on the road, Aru fought all the way to the line, taking 8th place on the stage just 38 seconds after Carthy had won.

Aru's brilliant performance ensured he climbed up to 2nd place overall, behind race winner Landa. A great result for Aru and also Team Qhubeka NextHash after a difficult last 24 hours for the team.

Fabio Aru
I am really sorry about the crashes over the last few days in our team. On the 2nd day Emil (Vinjebo) crashed and broke his collarbone, now he will miss the Vuelta. Yesterday also, Pozzo (Domenico Pozzovivo), he broke his knee, this is really terrible for us. Sander Armee also went home but we hope he can recover soon and Reinie (Janse van Rensburg) also crashed yesterday, so this has been very bad for our team.

But today we still had four guys in the race, and I have to say thank you to Bert-Jan (Lindeman), Reinie and Dylan (Sunderland). They really helped me a lot all day and to arrive in the climb in the first positions. Even though Reinie crashed yesterday he was still so strong today. So, in the end I am really happy about the result we could achieve.

When we made the decision to skip the Tour de France, and changed my calendar, I went to Lugano and Sibiu Tour and I was able to find a good feeling on the bike again. I could start attacking again, I could race the race, and I was able to fight in the race. I missed this feeling so much in the last three years and this was really hard for me.

So, these last few results, also with 2nd in GC at Vuelta a Burgos against very good riders, this gives me a very good feeling and I am so happy about it. Now I will have some easy days with the family and be ready for the next goals.