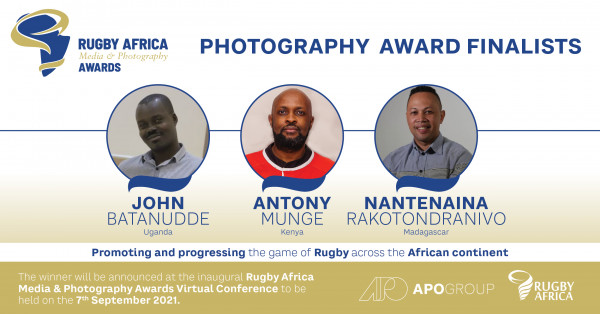 The inaugural Rugby Africa (www.RugbyAfrique.com/) Media and Photography Awards is pleased to announce the finalists in the running of the prestigious awards.

With applications to the awards running from 17th May to 31st July 2021, the competition was open to journalists and photographers who have remarkably captured the oval ball, green fields, and players in a display of rugby at its best. The winners will be announced on 7th September 2021 during the virtual awards, where two front-runners will have the opportunity to walk away with USD1,500 each in prize money.

Chaired by World Rugby Chairman Sir Bill Beaumont and featuring a jury of current and past male and female rugby players, as well as high-ranking senior executives from multinational organizations operating in Africa – from Google to Uber; Jaguar Land Rover to Visa; Pfizer to Harley Davidson, and male and female rugby referees, the awards honour the glorious game in Africa captured through the creative eyes and words of those that promote rugby in every corner of the continent.

Here is the full list of jury members: https://bit.ly/3D8zcpf

As part of Rugby Africa’s work to grow the culture of sport across the continent, the criteria for the awards were cognizant of submissions that value the promotion and progression of the game as we love it, throughout the continent.

Speaking about the calibre of entries received, World Rugby Chairman, Sir Bill Beaumont, said that the panel was impressed with the entries.

“With over 1,500 entries, it is very clear that rugby is increasingly capturing hearts and minds across Africa. The standard of entries was exceptional with breath-taking photographs and powerful reporting that perfectly convey not just the passion for the sport and its values across the media community, but the remarkable achievements of a growing and thriving African rugby family. I would like to congratulate our finalists, thank everyone who entered and thank Rugby Africa for bringing this superb initiative to life.”

General Manager of Rugby Africa, Coralie van Den Berg said that the stage for the love of rugby was indeed set with the entries received. Dedicated to the sustainable global growth of the sport in Africa, Rugby Africa views the continent as a key region with huge potential for the future development of rugby.

“I have enjoyed reviewing the pictures and reading the articles showing how rugby can change life for the better and help young people rise over their circumstances. It was inspiring and comforts us at Rugby Africa in our commitment to spread the game on the continent and use rugby to harness the potential of a booming young population. Now our mission is to transform our African potential into results on the field both on African soil with more participation and competitions and on the global stage with highly competitive teams.”

She added that rugby has been consistently growing in Africa over the last 10 years, with the rise of women’s rugby in particular being encouraging with numbers under 50,000 five years ago, climbing to over 350,000 female players now.

Van Den Berg emphasised that their action was three-fold – helping unions to develop rugby and to introduce the game through mass participation programs; training people in all stands of the game to make it safe and spread knowledge and expertise and organising continental competitions to qualify African teams to international events and increase the popularity of the game in Africa.