By APO Group
Share on Facebook Share on Twitter Share on WhatsApp Share on Telegram
By the end of 2020, more than 30.5 million refugees and asylum seekers had been forced to flee because of war, conflict and persecution. Leaving their past behind and seeking safety was not a choice but a mere necessity for their survival. Nearly half of these are children of school age. One of the unfortunate… 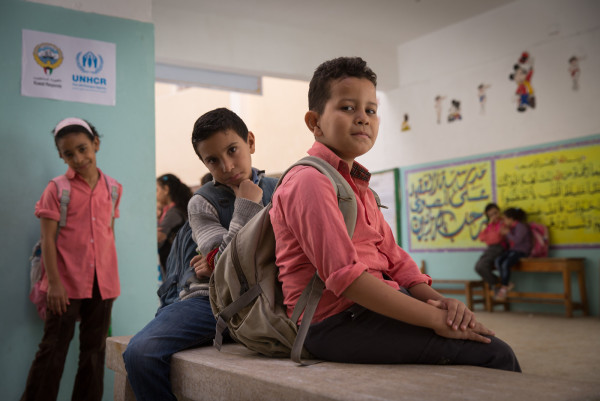 By the end of 2020, more than 30.5 million refugees and asylum seekers had been forced to flee because of war, conflict and persecution. Leaving their past behind and seeking safety was not a choice but a mere necessity for their survival. Nearly half of these are children of school age.

One of the unfortunate consequences of taking that journey to safety is that nearly half of them are out of school, despite the fact that education is a basic human right, enshrined in both the 1951 Refugee Convention and the 1989 Convention on the Rights of the Child.

In Egypt, there are 271,102 refugees and asylum seekers registered with UNHCR, of whom around 37% are children. Refugee children from South Sudan, Sudan, Syria, and Yemen are fortunate to be granted access to education in public schools on the same footing as Egyptians.

“I want to be a pilot when I get old and travel the world,” said Mohamed from Sudan, who lives with his single mother and older siblings after they sought asylum in Egypt. Mohamed’s family wish that they could live a stable life in safety. To them, being able to receive education means that the dream of a bright future is no longer unattainable.

Mohamed is one of millions of refugees around the world who did not choose to leave their homeland but were forced to seek protection out of their borders, when the situation in Sudan got dire. If they are denied access to education today, they will be left to face an unknown fate.

To support the enrolment of refugee children in schools, UNHCR provides students with education grants to contribute to the school fees and their supplements. In the academic year 2020/2021, UNHCR supported more than 48,000 students in public and community schools.

UNHCR additionally facilitated the selection of nine refugee students for a scholarship by the Sawiris Foundation for Social Development (SFSD) in 2021 to enroll in the Deutsche Hotelschule in El Gouna, where they are currently receiving high-quality hospitality education for three years.

“I am super excited to start my training at one of the international hotels here in ElGouna next year, as I will learn how to cook different recipes from international cuisines by global chefs,” said Ethar, a Sudanese refugee and a recipient of the SFSD scholarship. Ethar is the eldest daughter of her family, who sought asylum in Egypt in 2005.

In parallel, UNHCR strives to ensure and expand the access of refugee youth to the higher education system in Egypt, to give them a chance to acquire the knowledge and skills they need to access the job market and eventually rebuild their lives after everything else was taken away from them.

This includes providing several refugee youths from different nationalities with an opportunity to receive the Albert Einstein German Academic Refugee Initiative (DAFI) scholarship by UNHCR and the Government of Germany.

“I remember when I was a kid in my home country, I used to study my elder brother’s books, I was passionate about learning new stuff, and here I am now studying Medicine at Cairo University,” said Fatima, a Yemeni refugee and 2021 DAFI scholar. “The career I chose is the first step towards my future and I am proud it is medicine,” she added.

Fatima lives in Cairo with her family who sought asylum in Egypt in 2017 after their country was no longer safe for them. While the family was suffering from the consequences of the ongoing conflict, Fatima decided to make the best of her new situation and chose to pursue a career that would enable her to help others.

The DAFI refugee scholarship programme was launched in 1992 and offers refugee youth all over the world an opportunity to develop their skills and to empower them. In 2021, more than 500 refugee students were selected from Egypt to receive a scholarship to study a wide range of academic fields.

“I would like to succeed in my studies to prove that DAFI and UNHCR took the right decision when they decided to invest in us and to encourage others to support refugee youth,” said Fatima.

The Egypt-Japan University of Science and Technology (E-JUST) scholarship is another opportunity for refugee youth to continue their education in Egypt, fully funded by the Government of Japan. Four refugees, who were selected for this programme, are now studying Computer Science and Mechatronics, and UNHCR is proud to witness their graduation in 2023, among a group of prospective future scientists.

Among all the rights taken from refugees, the right to education remains one of the most important ones that UNHCR advocates for and encourages everyone to defend, to help create the opportunity for a better future for refugees and their host communities.

World
Zelensky denounces 'terrorist' shopping centre strike
1 day ago
Ukraine's President Volodymyr Zelensky denounced Monday's missile strike on a shopping centre in the central city of Kremenchuk as a "brazen terrorist act", as the death toll rose to 13.Zelensky was speaking after reports
World
Crossing the line: Texans facing ban at home seek abortions next door
1 day ago
A homemaker dependent on her husband's income, she agonized for three weeks about what to do, but always came to the same conclusion: "I can't have this child."
Guardian Life
Play Network’s ‘Glamour Girls’ Tops Netflix Global Charts, Reaches Top 10 Movies Worldwide In 3 Days
1 day ago
Glamour Girls, an original story produced by the Play Network Studios in the exploration of their lifetime rights to the intellectual property ‘Glamour Girls’ has topped the global charts of the streaming platform Netflix, barely three days after its release.
Nigeria
Oyetola pledges to restore Modakeke’s lost glory, if re-elected
1 day ago
Gov. Adegboyega Oyetola of Osun has pledged to restore the lost glory of Modakeke by providing basic infrastructure in the community if re-elected.
Guardian Life
Carolyna Hutchings Denies Claims That She Falsified Her Age
1 day ago
Former Nollywood actress and Real Housewives of Lagos star Carolyna Hutchings has taken to Instagram to clap back at trolls who accused her of falsifying her age. Hutchings had posted a picture celebrating her 35th birthday on Sunday but soon came under fire from many critics who accused her of lying about her age.  …

APO Press Releases
Niger, Algeria and Nigeria Reach Milestone for Trans-Saharan Gas Pipeline Project
2 hours ago
The Ministry of Petroleum of the Republic of Niger is proud to announce that the country has reached a new milestone in further opening the domestic and regional gas market through a development in the construction of the multi-billion Trans-Saharan Gas Pipeline (TSGP) alongside Algeria and Nigeria. H.E. Mahamane Sani Mahamadou, Minister of Petroleum for…
APO Press Releases
President Kenyatta Calls For Urgent Global Action to Protect Oceans
2 hours ago
Download logoPresident Uhuru Kenyatta has called for urgent global action to address challenges facing oceans, seas and the marine environment, saying the world needed to upgrade from proposals on the subject to tangible interventions. “We, expect this conference to shift gear from proposals to action. Action that is driven by science, technology, and innovation. We…
APO Press Releases
Protecting children from measles in drought-affected Somalia
2 hours ago
Download logoWhen young Nastexo and Salmo developed high fevers, coughs, sore throats, runny noses and watery eyes, Ilmo may not have known exactly what problem her children had, but their rashes gave it away. Ilmo, who lives in a drought-affected location in Baidoa, knew her children had measles as she had seen many cases recently…

APO Press Releases
PetroNor E&P Chairman Eyas Alhomouz to Discuss African Exploration at African Energy Week in Cape Town
2 hours ago
The African Energy Chamber (AEC) is proud to announce that Eyas Alhomouz, Chairman of independent oil and gas company, PetroNor E&P, will be coming to African Energy Week (AEW) (https://AECWeek.com) 2022, being held from October 18-21 in Cape Town, to discuss African exploration and production (E&P) in a post-COVID-19 climate. As PetroNor looks to strengthen its footprint…