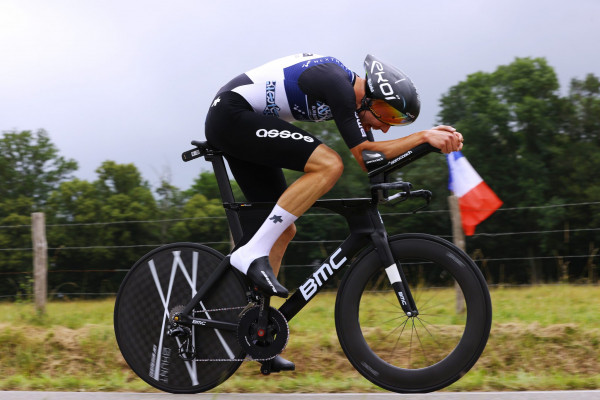 The 5th stage of the 2021 Tour de France was a 27km individual time trial finishing at Laval Espace Mayenne. Max Walscheid, who in the week prior to the Tour de France took the bronze medal at the German ITT Championships, was focused on delivering a strong performance for Team Qhubeka NextHash today.

After Simon Clarke and Nicholas Dlamini got around the course without issue, Walscheid was next to come home for Team Qhubeka NextHash and stopped the clock with what was the 4th fastest time at that point.

The majority of the field was still to finish though, including our riders Carlos Barbero, Sean Bennett, Michael Gogl and Sergio Henao. Walscheid's effort held strong in the top 10 for quite some time but once the GC riders started to come in, his time would slide down the rankings to eventually finish 28th on the stage.

Despite the yellow jersey staying on the shoulders of Van der Poel, there was quite a shift among the rest of the GC contenders.

Henao's respectable ITT effort saw him gain one spot on GC to sit in 24th place and +3'55″ down, with all the big mountain stages still to come.

Max Walscheid
I emptied myself, and went full flat-out. I think I paced it well and tried to not overdo it in the first two climbs and then bring it as fast as possible to the line.

I’m happy with my race, did good values for myself and I’m confident about my legs.

Now That Coronavirus Is Over (A Satire)
22 mins ago  On The Cover
Catch Up On Events From Last Week
1 hour ago  What's New
Voter apathy mars Lagos, Ogun polls
3 hours ago  Nigeria
Light shines on unconditional electronic transmission of election result
3 hours ago  Nigeria
D’Tigers begin quest for olympics medal
3 hours ago  Sport