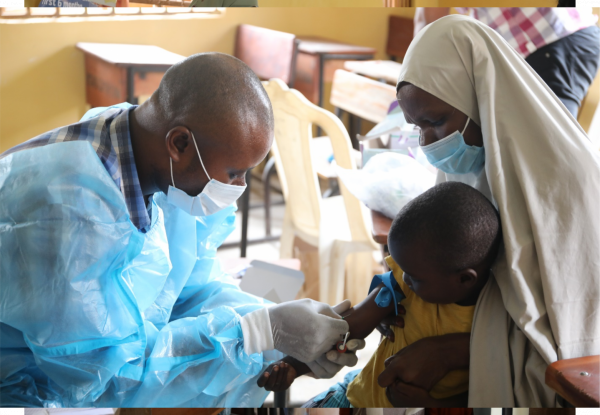 “I now understand how to keep my family safe from contracting diseases like cholera, covid-19 and other diseases.  The health officers taught us the importance of immunization and provided malaria testing and treatments, says Zulahatu Ibrahim, a 50-year-old mother of seven residing in Jiwa village, located on the outskirt of Abuja.

Considering the rapid increase in hygiene-related diseases in Nigeria, health workers from the Federal Capital Territory Public Health Department in collaboration with the World Health Organization (WHO), embarked on health sensitization campaigns to communities in the state capital to enlighten them on preventing infectious diseases. The team provided health services such as Covid-19 and Malaria testing. They also distributed macronutrients powder, deworming and administering vitamin A supplements to over 500 children and distributed insecticide-treated nets (ITNs) and water guards to the mothers. In all, over 700 women and children received clinical consultation.

“I appreciate their effort and would like them to come often. Five of my children benefitted from malaria and deworming exercise. They also attended to many children and pregnant women, said Zulahatu.

Aisha Yau, a mother of three whose children benefited from the exercise, said her children, all below the ages of six, were tested for malaria. The team also gave a mosquito net as malaria prevention for her children.

Thanking WHO, Aisha said she would like the campaign to be a regular exercise, as this would teach the women how to keep their loved ones safe.
My children will start sleeping under this net because I do not want them to have malaria. I have learnt how to take better care of my family, she said.

Intervention
Amidst the surge in the third wave of the covid-19 pandemic, there has been a concurrent increase in reported cases of infectious diseases such as measles, cholera in Nigeria.

Cholera is an acute bacterial infection associated with profuse diarrhoea, vomiting, dehydration and death. The disease is spread mainly by faecal contamination of water and food and is linked to poor sanitation and lack of clean drinking water.  In Nigeria, 23 states have recorded suspected cases of cholera in 2021. As at 15 August2021, a total of 47,603 suspected cases including1,768 deaths (CFR 3.7%) have been reported from the states and FCT.

In the FCT, there has been surge in reported cases of cholera within the six Area Councils (Bwari, Kuje, Kwali, Abaji, Gwagwalada and Abuja Municipal Area Council (AMAC)), with 1,189 suspected cases and 75 deaths reported as of 15 August 2021.

In his remark, the traditional leader of Jiwa Community, Dr Idris Musa, said it has become imperative to have a continuous campaign to reinforce the health information on covid-19, disease preventive measures and the importance of routine vaccination.

The Emir said the outreach would also reinforce the community health awareness talks done within the communities by the traditional leaders.
Within the community, we are using the existing polio eradication structure to create awareness on covid-19, cholera, and other infectious diseases. We have continued to sensitize them on the need to use face masks and observe all other non-pharmaceutical measures to protect themselves against covid-19. We also encourage them to visit the health facilities when sick”, he said.

Meanwhile, the Officer-In-Charge of the Primary Health Care Center, Jiwa, Hadiza Adamu Idris, said the intervention would go a long way in providing health services for most of the sick populace who had not been visiting the health facility.

Mrs Idris said “We have recorded about eight cases of cholera in Jiwa. The outbreak is not severe in Jiwa. However, the campaign will assist in raising more awareness within the community about cholera and other infectious diseases.

“Jiwa is still low in the prevalence of cholera cases, unlike neighbouring communities Bwari, Kuje, Zuba). We, however, decided to conduct the outreach in Jiwa because of its proximity to those communities, said Hawua Suleiman, the Head of Health Promotion and Public Health, FCTA.

She said the intervention was part of the routine biannual sensitization campaigns conducted by the agency, but strategic this year, because of the ongoing Covid-19 and cholera outbreak reported in the FCT.

Distributed by APO Group on behalf of World Health Organization (WHO) – Nigeria.