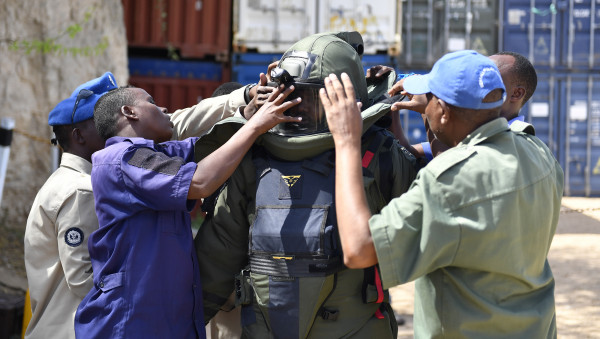 Explosive hazards continue to have a detrimental impact on peacebuilding and state building in Somalia. Over the past years, extremist groups have continued to use improvised explosive devices (IEDs) as the preferred weapon targeting AMISOM and Somali Security Forces. In addition, indirect fire, explosive remnants of war (ERW), and legacy mines from the civil war continue to endanger the lives of the security forces and civilian population.

The People of Japan has renewed its commitment to promote peace building and stability in Somalia by contributing over four million USD to the United Nations Voluntary Trust Fund for Assistance in Mine Action. This important contribution will enable the United Nations Mine Action Service (UNMAS) to reduce the threat posed by explosive hazards and contribute to establishing a safe, secure and peaceful Somalia. Over the past decade, including this generous contribution, Japan has contributed USD 19 million to mine action in Somalia.

The generous contribution from the People of Japan will assist in enhancing the capability of the Somali Police Force (SPF), both in Mogadishu and five Federal Member States, to mitigate the threat of IEDs as well as strengthen the organizational capacity of the SPF by refurbishing their police headquarters in Mogadishu.

According to the Embassy of Japan in Kenya, “the Japanese government supports UNMAS’ efforts which strengthens the Somali government’s capacity to cope with internal insecurity by providing technical support to the Police force, increasing the number of explosive management teams and equipping them. We hope this activity will contribute to national and social security in Somalia”.

“We are very grateful for the continued commitment of the Government of Japan aimed at eliminating the threat of explosive hazards from Somalia while promoting protection of civilians,” said Ms. Qurat-ul-Ain Sadozai, the UNMAS Programme Manager in the country. “The generous and multi-year support of the Government of Japan will allow UNMAS to press on with training and mentoring support to the Somali Police Force (SPF) in further enhancing security for the people of Somalia”.

Distributed by APO Group on behalf of United Nations Mine Action Service (UNMAS).