JMC (5+5) Meets in Geneva to Develop Action Plan for the Withdrawal of Mercenaries, Foreign Fighters and Forces from Libya

By APO Group
The Joint Military Commission (JMC, 5+5) convened today in Geneva to discuss the development of a comprehensive action plan for the withdrawal of mercenaries, foreign fighters, and foreign forces from Libya. The meeting, facilitated by the United Nations Support Mission in Libya (UNSMIL), is held in accordance with the Ceasefire Agreement of 23 October 2020,… 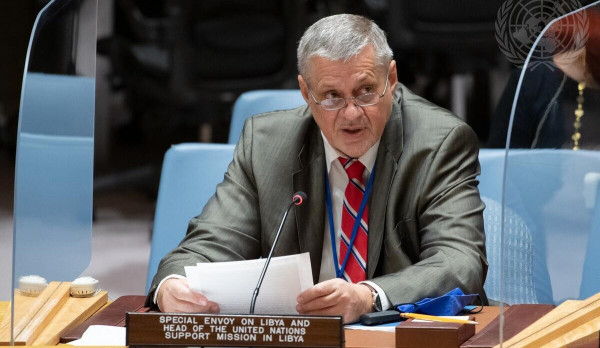 The Joint Military Commission (JMC, 5+5) convened today in Geneva to discuss the development of a comprehensive action plan for the withdrawal of mercenaries, foreign fighters, and foreign forces from Libya.

The meeting, facilitated by the United Nations Support Mission in Libya (UNSMIL), is held in accordance with the Ceasefire Agreement of 23 October 2020, and relevant UN Security Council resolutions. The meeting is also part of the UN Mission’s efforts to advance the intra-Libyan security track, in parallel to international efforts as part of the Berlin Conference on Libya.

In his opening remarks, Special Envoy of the UN Secretary-General and Head of UNSMIL expressed his appreciation to both delegations and to international partners who are in support of this effort. “As always, your task is bigger than its military and security aspects; your task has a direct impact on the overall developments in the country, on regaining its sovereignty, stability, security, and unity. Everyone understands how critical this meeting is for the sake of the country; everyone understands that if you will manage to come together and agree on such an action plan you will be sending a signal, not only to the political leaders and institutions in the country but a signal of hope also to your people that things can move, including towards the elections that should bring a change of all the institutions and authorities of the country based on a strong popular legitimacy,” Special Envoy, Kubiš said.

He added that “Of course, it is a complex issue, as it is not only a concern for Libya, it is also a concern to regional countries and the international community. The UN, along with its international partners, stands ready to support you in this endeavor, to the maximum extent possible, including through the deployment of UN ceasefire monitors, who will work under your guidance and at your request to monitor and verify the withdrawal. My message to you is to not let the “spoilers of hope” undermine your crucial work.”

UNSMIL emphasized on the national ownership and leadership of the military and security, political and economic tracks as key to support the Libyans in regaining their sovereignty. The UN Mission commends the patriotism and commitment of the 5+5 JMC members, encouraging them to seize this opportunity to produce the required action plan for the withdrawal of the mercenaries and foreign fighters and forces, which will also guide the international community’s support to the Libyan efforts to unify the military as well as disarmament, demobilization and reintegration (DDR) and security sector reform (SSR) efforts in Libya, with a stabilizing impact on the region.

AMA Press Releases
Bill & Melinda Gates Foundation Commits up to $120 Million to Accelerate Access to COVID-19 Drug for Lower-Income Countries, Calls on Other Donors to Mobilize Resources
NOW
Financial commitment aims to secure dedicated, low-cost supply of molnupiravir, if the drug is authorized by regulators; builds on long-term efforts to increase access to tests, treatments, vaccines SEATTLE, October 20, 2021 -/African Media Agency(AMA)/- The Bill & Melinda Gates Foundation announced today a commitment of up to $120 million to accelerate access to the investigational…
AMA Press Releases
South Atlantic Cable System Steps up to Support Major Telco Operators and Global Content Providers
NOW
LUANDA, Angola, 20 October 2021 -/African Media Agency(AMA)/- The South Atlantic Cable System (SACS) has seen a considerable increase in traffic as major telco players look for direct access to markets in the US and South America.When the 6 156 km intercontinental subsea cable came on stream in September 2018, latency between Africa and the Americas was almost…
News
French far-right presidential hopeful points gun at journalists
6 mins ago
French far-right presidential hopeful Eric Zemmour pointed a sniper's rifle at journalists at an arms fair on Wednesday, a stunt that reinforced his anti-media populist credentials but that drew condemnation from opponents. Zemmour, who has emerged as a front-runner for presidential elections next year, turned the weapon on reporters at the Milipol arms fair in…
Nigeria
Police say not informed about meeting where Imo traditional rulers were killed
13 mins ago
Njaba Local Government Council in Imo did not inform the police about its Tuesday’s meeting with traditional rulers where gunmen killed two of the rulers. This assertion was made in Owerri on Wednesday by the Commissioner of Police in Imo, Mr Rabiu Hussaini. Police spokesman in Imo, CSP Mike Abattam, said in a statement that:…
Theatre
Farrell, Kuzi-Orizu Ojo to deliver keynote addresses at 10th anniversary of AFRIFF
25 mins ago
Africa International Film Festival (AFRIFF), today announces James Farrell, International Head of Local Originals at Amazon Studios, and Ukonwa Kuzi-Orizu Ojo, Chief Marketing Officer for Prime Video & Amazon Studios, as its keynote speakers for its 10th anniversary edition. The Prime Video leaders will join together in a Fireside Chat for the session at 7.00pm…

APO Press Releases
Secretary-General of Ministry of Foreign Affairs Bids Farewell to Ambassador of Mali
1 day ago
HE Secretary-General of the Ministry of Foreign Affairs Dr. Ahmed bin Hassan Al Hammadi met Tuesday with HE Ambassador of Republic of Mali Shaykh Ahmad Tijani Diakite, on the occasion of the end of his tenure. HE Secretary-General of the Ministry of Foreign Affairs thanked HE the Ambassador for his efforts in supporting and strengthening…
APO Press Releases
Coronavirus - Malawi: UK Emergency Medical Team provides COVID-19 support and training to health workers in Malawi
12 hours ago
Download logoA UK Emergency Medical Team (EMT) will deploy to Malawi for 8 weeks to support the Ministry of Health’s Covid-19 response, particularly in management of critically ill COVID patients, community perceptions around COVID-19 and support to community engagement on national COVID-19 vaccination efforts. The UK EMT is a rapid medical response capability, comprising of…

APO Press Releases
African Union of Broadcasting (AUB) and Canal+ to kick against Television Signal piracy
12 hours ago
Television Signal piracy is a real shortfall for the audiovisual industry, nowadays. During the African Nations Championship held in Cameroon in January-February 2021, opportunity was given to the African Union of Broadcasting (www.uar-AUB.org ) to (re) take stock of satellite and online piracy, during broadcast time. Out of 32 games delivered in 21 days, several were screened…