By APO Group
Share on Facebook Share on Twitter Share on WhatsApp Share on Telegram
Madelina Marko, a 92-year-old, is deeply disturbed by the ongoing conflict in and around Tambura, Western Equatoria. “I have lived a long life,” says Madelina. “But despite everything my country has gone through, including civil war, I have never seen a situation like the one currently happening in our state. People—women, men, young children—are suffering.… 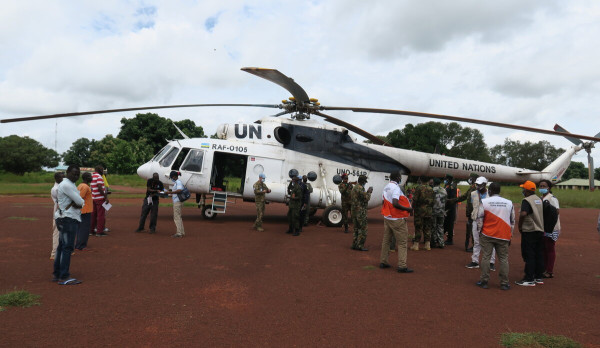 Madelina Marko, a 92-year-old, is deeply disturbed by the ongoing conflict in and around Tambura, Western Equatoria.

“I have lived a long life,” says Madelina. “But despite everything my country has gone through, including civil war, I have never seen a situation like the one currently happening in our state. People—women, men, young children—are suffering. There has been too much loss of life and property.”

Madelina was speaking to a delegation from the Joint Defence Board, who recently visited Namutina and Tambura to see firsthand the impact of ongoing conflict between armed groups in and around Tambura which has caused significant harm, including the killing, and injuring of civilians, the displacement of more than 80,000 people, destruction of property, and disruption of humanitarian activities.

This important visit was facilitated by the United Nations Mission in South Sudan (UNMISS), which is working with all stakeholders, including the government to stabilize the situation and protect communities.

According to Lieutenant General Wizely Welebe Samson, Team Leader of the Joint Defence Board, there is an immediate need to quell future conflict and provide humanitarian assistance to the newly displaced.

“We are aware that the presence of the Joint Defence Board in Tambura has been instrumental in bringing about a relative peace in the past week. Our job is to work with all parties to make sure this fragile stability is consolidated, and humanitarian agencies can come in to deliver much-needed succor to the displaced,” he stated.

For its part, following the initial upsurge of violence here, UNMISS immediately deployed boots on the ground and set up a temporary operating base which enables peacekeepers to carry out patrols to deter conflict.

Currently, Blue Berets are providing protection to more than 9,000 displaced people who have sought refuge, facilitating the safe collection of food and water by local communities, and supporting engagements with political and traditional leaders to promote dialogue and reconciliation.

Food aid by humanitarian agencies has reached more than 50,000 newly displaced people in September 2021 and UNMISS has facilitated this by providing force protection to aid convoys.

World
3 dead, 3 missing after avalanche on Ecuador volcano
17 mins ago
An avalanche Sunday on a snow-capped Ecuadoran volcano, the highest peak in the country, killed at least three climbers and left three others missing, officials reported. The avalanche struck a group of 16 mountaineers while at an altitude of 6,100 meters (20,000 feet) on the dormant Chimborazo volcano, according to responders. "There are three missing…
Nigeria
NUC picks 6 varsities for standards enhancement programme
23 mins ago
The National Universities Commission (NUC) has picked six federal universities for the Sustainable Procurement, Environmental and Social Standards Enhancement (SPESSE) Project.
World
Turkey lira slumps to record low after Erdogan orders expulsions
31 mins ago
The Turkish lira dropped to record lows on Monday after Turkish President Recep Tayyip Erdogan at the weekend ordered the expulsion of the ambassadors of 10 countries, including Germany and the United States.
What's New
Friends Star James Michael Tyler Dies At 59
38 mins ago
US Actor James Michael Tyler popularly known for his role in the sitcom Friends has passed away at age 59.  His manager Toni Benson in a statement to TMZ confirming his death revealed that the actor had died of prostate cancer in his home. Tyler had been diagnosed in September 2018 and, after his diagnosis, shared…
Sport
Michael Jordan sneakers sell for nearly $1.5 mn, an auction record
42 mins ago
A pair of sneakers worn by NBA superstar Michael Jordan early in his career sold for nearly $1.5 million on Sunday, setting a record price at auction for game-worn footwear, Sotheby's said.