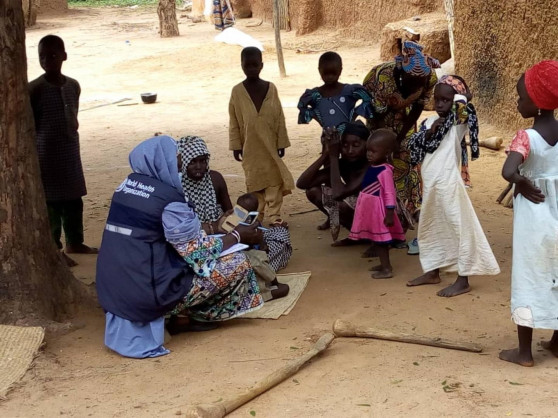 “For a long time, I was skeptical about vaccinating my children against polio, but now I know better after one of my children work up one morning with weakness of his limbs due to polio says Baba Ali, a resident of Dawakin Kudu LGA in Kano State

“I thank God that my three-year-old son is now regaining the use of his legs. I will henceforth not only allow my children to be vaccinated but will champion the drive to vaccinate other children in my village. I have learnt that there are a couple of families in Wangara that do not allow their kids to receive routine immunization. I hope my case will serve as an eye opener to them before it is too late” he said.

Just like Mr Ali, Hajiya Sa’a, grandmother of Tanimu the 23 months old boy paralyzed in Tambutu settlement of Jido ward in Dawakin Kudu LGA, Kano State said although her grandson started receiving the routine vaccination, his parent did not comply with routine immunization calendar and the child did not complete his vaccination doses.

“I have seen the consequences of that. This will not repeat itself in my family. I am now more enlightened, and I urge all and sundry to follow the vaccination schedule religiously” said Hajiya Sa’a,.

Although Nigeria has successfully eradicated the wild poliovirus in the country, there have been recent reports of the circulating Vaccine Derived Poliovirus (cVDPV2) in 18 states, including Kano where four children were already confirmed paralyzed of the disease.

In an effort to curtail the spread of cVDPV2 outbreak in Kano State, the World Health Organization (WHO) supported the state government to plan and conduct mass vaccination exercise with the novel Oral Polio vaccine type 2 (nOPV2). The Outbreak Response (OBR) campaign was synchronized with four neighboring states that were also affected. A total of 3,297,347 children aged 0-59 months, representing 99% of the targeted children in Kano State, were vaccinated at the end of the exercise on 4th August 2021.

Providing political oversight
The Deputy Governor of Kano State, Dr Nasir Yusuf Gawuna during the flag-off of the campaign re-affirmed the state government’s commitment to eradicate all forms of polio by investing in various interventions and provision of the necessary funds to fight the disease.

He added, “We will do all that need to be done to ensure no child will ever be paralyzed by the virus in the state”.

He also acknowledged the support of development partners, adding, “We are also grateful to the Federal Government, agencies and international organizations for their cooperation in implementing various projects in this state, such as WHO, UNICEF, Bill & Melinda Foundation, and Dangote Foundation, CHAI, CORE GROUP, Rotary International, FCDO-Health, MSF, MSH and others.”

The cVDPV2 circulates in areas with low population immunity.  The first confirmed case of cVDPV2 in 2021 in Kano was a 63-month old boy from Albasu LGA with date of onset of paralysis on the 21st April 2021. Since then, three additional children were reported, while five viruses were confirmed from environmental samples.

WHO’s support for quality response
Speaking during at the flag-off, the WHO State Coordinator Dr Bashir Abba emphasized the close collaboration with the state government and highlighted that WHO supported in capacity building activities, microplanning, risk communication & community engagement as well as monitoring and supervision of the campaign.

“WHO also supports surveillance for polio and other vaccine preventable diseases, including transportation of samples to the accredited laboratories for testing”, he added.

With increase in the number of cVDPV2 cases recorded in the state, the capacity of 112 Disease Surveillance and Notification Officers (DSNOs) and their assistants (ADSNOs) was further enhanced with the support of WHO to detect early and report cases.

To build the capacity of the media on issues surrounding cVDPV2 outbreaks, routine immunization and improving community awareness on the OBR campaign, WHO sensitized 25 journalists from both print and electronic media houses.

In the same vein, WHO supported the training and sensitization of 44 LGA

Involvement of the traditional leaders
In Kano, traditional leaders are the custodians of the culture. During the flag-off, the Emir of Gaya represented by Madakin Gaya and Sarkin Yakin Kano, a veteran member of the northern traditional council on PHC, re-affirmed the community leaders’ commitment towards ensuring all eligible children are vaccinated.

“We showed the way in the days of paralysis due to wild poliovirus, we will show the way again now to stop this outbreak by ensuring all eligible children receive both routine immunization and campaign OPV doses”.

Also speaking on the response activities, the ward head of Dawakiji in Dawakin Kudu LGA, Alhaji Isa Mohammed expressed his delight with the swift response by WHO in promptly investigating the outbreak and building capacity of health workers as well for swift response.

“The health of my people is of utmost importance to me. The WHO has proved to be efficient health leader with this swift response.”
The WHO works with other partners in the Emergency Operation Center including UNICEF, CDC/AFENET, Rotary and Core Group partners project among others, in developing the state plan, conducting outbreak investigation and implementing response activities.