By APO Group
Share on Facebook Share on Twitter Share on WhatsApp Share on Telegram
More than 2,000 African asylum seekers, refugees, and migrants camping since early October 2021 in precarious conditions in front of a shuttered United Nations facility are in dire need of shelter, food, and medical treatment, Human Rights Watch said today. Libyan authorities need to respond to this humanitarian emergency, and European states, whose support enables Libyan authorities… 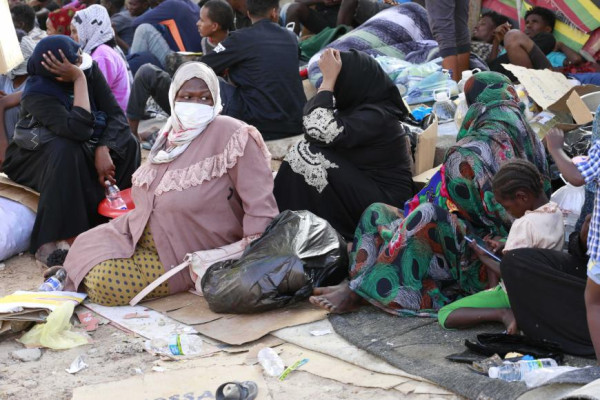 Thousands of migrants and asylum seekers gathered around the Community Day Centre (CDC) after armed groups linked to the Interior Ministry conducted widespread raids and makeshift shelter demolitions in Tripoli’s Hai al-Andalous municipality. They were purportedly targeting criminal networks but left thousands homeless. Those who remain outside the CDC, where the UN refugee agency, UNHCR, previously provided medical assistance and other services, are peacefully demanding evacuation from Libya to a safe location amid worsening humanitarian conditions and attacks by armed groups.

“By demolishing migrants’ and asylum seekers’ makeshift shelters, Libyan authorities manufactured a humanitarian crisis, leaving thousands of people fending for themselves in the streets,” said Hanan Salah, Libya director at Human Rights Watch. “Libya and European states should urgently respond to this rapidly deteriorating situation as people are being exposed to violence and lack basic any help for basic needs.”

Armed groups and police units linked with the Interior Ministry of the Government of National Unity (GNU) raided Tripoli neighborhoods around the Gergaresh area, where many African migrants and asylum seekers lived, on October 1 and the following days, purportedly to disrupt illicit drug networks. The groups arrested at least 5,000 people, including women and children and UNHCR-registered asylum seekers and refugees, and transferred them to migrant detention centers.

During the raids, the armed groups killed one person and wounded at least 15 others, according to UNHCR. Armed groups arbitrarily arrested and detained people without individual verification of immigration or asylum status.

A registered asylum seeker from South Sudan who was in his dwelling during early morning raids on October 1 said multiple armed groups and Interior Ministry units surrounded the neighborhood with armored vehicles and light and heavy weapons. Shooting lasted from around 1 a.m. to 8 a.m., he said: “I could hear many women and children crying. I saw horrific destruction. I managed to sneak out with others and spent the whole day and night in perpetual fear, while starving and thirsty. We were too afraid to ask anybody for help, so some even drank from the sea.”

Of those arrested on October 1, the authorities transferred over 4,000 people including women and children to a migrant prison known as Al-Mabani in Ghot al-Shaal, while the rest were transferred to other migrant prisons in Tripoli. Several detainees who were at Al-Mabani said that inhumane conditions there, such as severe overcrowding, lack of sufficient food and medical care, and ill-treatment resulted in riots and a mass prison break on October 8.

Former detainees described severe beatings with wooden sticks and alleged that one detainee died on October 5 after a guard struck him on the head with a metal object. During the breakout, guards shot and killed at least six detainees and injured scores of others, according to the International Organization for Migration.

Those in the streets in front of the CDC described harrowing living conditions. Since the UNHCR closed the center on October 4 citing security concerns for staff due to the large crowds encamped there, they had not received any cash or in-kind assistance from any international organization or the Libyan government. They said some private citizens donated some food. They said they had no access to toilets and no shelter from the rain and very little means to buy food.

People camping on the streets are also exposed to attacks by armed groups as well as traffic accidents. In one incident on October 27 a car hit a 17-year old Eritrean boy who subsequently died, UNHCR confirmed.

On October 12, armed men apparently from a local militia that controls the area known as Fursan Janzour, beat and twice shot Sudanese asylum seeker Amer Abker in front of CDC while trying to arrest him, several refugees said. He died the next day.

A registered asylum seeker from Sudan said he had walked for an hour to reach an acquaintance so he could wash and use a toilet. “Even mosques have now shut their doors to us refugees,” he said. “I am afraid to move around as I could be attacked. We are afraid, no one can protect us.”

UNHCR should urgently explore all avenues for ensuring that the basic needs of people currently outside of the CDC are met, and take steps to identify people with protection needs, Human Rights Watch said. UNHCR should also move quickly to reopen the center safely, including to provide accommodation to the most vulnerable among those sleeping in the streets.

Prime Minister Abdelhamid Dabeiba, in a statement after the raids on October 1, called the Interior Ministry officers “heroes.” Without providing any evidence, he said that they had carried out “a planned security operation, to eliminate the largest drug manufacturing and distributing dens in the Gergaresh area,” and he vowed to pursue criminals “in all regions of Libya.”

UNHCR said it had identified over 1000 people who would be prioritized for humanitarian evacuations – suspended since August – once Tripoli authorities give the green light to restart them.

Libya’s General Prosecutor should urgently conduct a transparent investigation into alleged deaths of asylum seekers and migrants due to the security operations and prison break in early October, Human Rights Watch said.

Human Rights Watch has documented systematic and widespread abuses committed with impunity against migrants, asylum seekers, and refugees in Libya over the years by prison guards, armed groups linked with Libyan authorities, and traffickers and smugglers. Between January and September, Libyan authorities intercepted more than 27,551 people at sea and forced them back to Libya, where they face inhumane detention conditions, sexual violence, torture, forced labor, extortion, and death.

EU policies to contain migrants and asylum seekers in Libya through supporting Libyan authorities, and clear evidence of this support contributing to ongoing abuses despite mitigating efforts, make the EU complicit in these abuses. The EU has a special responsibility to ensure evacuations, of refugees, asylum seekers, and migrants at risk in Libya, including directly to EU countries

EU member states should condition cooperation with Libyan authorities on migration on the prompt release of all refugees, asylum seekers, and migrants being arbitrarily detained; formal recognition of UNHCR and allowing it the full exercise of its mandate; the signature and ratification of the 1951 Refugee Convention; and establishment of national programs for independent, impartial, and transparent monitoring of human rights violations against migrants, asylum seekers, and refugees in Libya.

“The international community including UNHCR needs to step up aid efforts to help those in dire need, and Libyan authorities need to end the deadlock and urgently ensure restart of humanitarian evacuations,” Salah said. “Refugees, asylum seekers, and migrants lacking shelter should be offered temporary safe solutions and viable alternatives to detention.”

Nigeria
Don’t be political spectators, let your numbers count- Bello
2 hours ago
Yahaya Bello of Kogi has called on Nigerian youths to make their numbers count and not be political spectators in the country’s 2023 general elections and democratic processes.
World
IMF to grant Zambia financial relief in return for ‘bold’ reforms
3 hours ago
The International Monetary Fund (IMF) has announced plans to give financial relief to Zambia in return for economic reforms.
Sport
Dortmund 'praying' Haaland stays next season, says Riedle
5 hours ago
Borussia Dortmund legend Karl-Heinz Riedle says the Bundesliga club is 'praying' star striker Erling Haaland stays next season as they fend off interest from the Premier League.
World
At least 17 suspected Omicron cases after Oslo party
5 hours ago
At least 17 people who caught Covid-19 after a Christmas party with more than 100 guests in Oslo last week are suspected of having the Omicron variant, officials said Friday.
Nigeria
Procurements, postings at Refugee Commission in line with procurement act - NCFRMI
5 hours ago
The National Commission for Refugees, Migrants and Internally Displaced Persons (NCFRMI) says media attack would not distract the management. The establishment is under the Ministry Humanitarian Affairs, Disaster Management and Social Development. Sampson Ikemitang, Head of Public Relations, in a statement, insists procurement processes and approvals are in line with the Public Procurement Act, 2007.…

APO Press Releases
Uganda ready to implement new secondary curriculum
3 hours ago
The Prime Minister and Leader of Government Business in Parliament, Robinah Nabbanja, has informed legislators that Uganda's education sector is on course in rolling out the new lower secondary school curriculum when schools reopen in January 2022. "Government has recruited and deployed 1,598 staff in the newly completed seed secondary schools under the Uganda Inter-governmental…
APO Press Releases
Sweden and UN Agencies launch multi-year project to strengthen food and nutrition security in Mali
3 hours ago
Download logoThe Government of Sweden, the Food and Agriculture Organization of the United Nations (FAO), the United Nations Children’s Fund (UNICEF), and the World Food Programme (WFP) have signed a four-year programme to strengthen the resilience of vulnerable communities affected by food insecurity, malnutrition, and the effects of climate change in the Malian regions of…
APO Press Releases
Tigray conflict: UN experts call for urgent action to stop violence against women
3 hours ago
Download logoUN human rights experts* today expressed grave concern about the widespread sexual and gender-based violence committed against women and girls in the Tigray, Amhara and Afar regions of Ethiopia by parties to the conflict. They reiterated the recommendations by the Ethiopian Human Rights Commission-Office of the High Commissioner for Human Rights Joint Investigation report, for…
APO Press Releases
IMF Staff Reaches Staff-Level Agreement on an Extended Credit Facility Arrangement with Zambia
3 hours ago
Download logoThe IMF team reached a staff-level agreement with the Zambian authorities on a new arrangement under the Extended Credit Facility (ECF) for 2022-2025 to help restore macroeconomic stability and provide the foundation for an inclusive economic recovery. An International Monetary Fund (IMF) team led by Allison Holland, Mission Chief for Zambia, conducted a virtual…