By APO Group
Share on Facebook Share on Twitter Share on WhatsApp Share on Telegram
Minister of Foreign Affairs, Migration and Tunisians Abroad Othman Jerandi, on Tuesday, took part in a virtual high-level meeting on "advancing feminist policy and action through Our Common Agenda" in New York. This meeting was announced by the UN Secretary General, on September 21, 2021 on the opening of the 76th session of the UN… 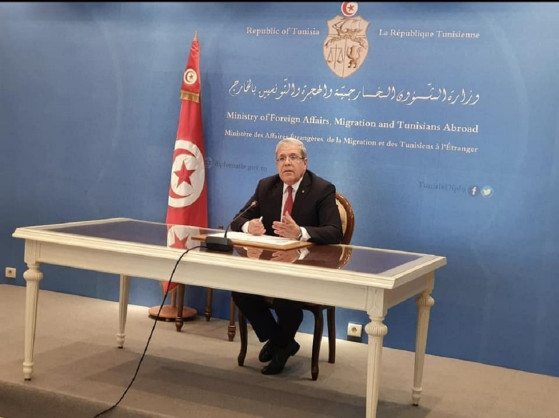 Minister of Foreign Affairs, Migration and Tunisians Abroad Othman Jerandi, on Tuesday, took part in a virtual high-level meeting on “advancing feminist policy and action through Our Common Agenda” in New York.

This meeting was announced by the UN Secretary General, on September 21, 2021 on the opening of the 76th session of the UN General Assembly.

In his remarks, Jerandi said the health crisis caused by the COVID-19 pandemic has shown how the role of women was pioneering in the “fight” whether in their family or professional environment.

He stressed, in this regard, that the pandemic has had a negative impact on women and girls, noting that various countries in the world have experienced an “unprecedented” increase in the rate of violence against women. “The major role played by women's organisations in containing these impacts is well documented,” he said.

In addition, the Minister considered “essential” to uphold gender equality, to promote women's political, economic and social empowerment and to ensure their participation in public affairs.

“The principle of equality is an important tool to achieve international goals in promoting peace, security and sustainable development,” he pointed out.

Distributed by APO Group on behalf of Republic of Tunisia – Ministry of Foreign Affairs, Migration and Tunisians Abroad.

Sport
Salah scores decisive penalty as Egypt beat Ivory Coast on penalties
4 hours ago
Mohamed Salah scored the decisive spot-kick as record seven-time champions Egypt beat the Ivory Coast 5-4 on penalties after a 0-0 draw in Douala on Wednesday to reach the Africa Cup of Nations quarter-finals.
World
NATO delivers written 'proposals' to Russia
5 hours ago
NATO on Wednesday said it had delivered a set of written "proposals" to Russia, after Moscow issued a raft of demands to roll back US influence in eastern Europe.
Nigeria
NSCDC destroys 10 illegal modular refineries in Abia, says State Commandant
6 hours ago
The Abia Command of the Nigeria Security and Civil Defence Corps has destroyed 10 illegal modular refineries operating in Okohia and Owaza oil-bearing communities of the state, an official has said.
Technology
How Bitcoin technology will change future business
6 hours ago
Bitcoin and its underlying technology can take businesses into the untapped regions of the world. Today, media headlines highlight blockchain technology and investments around it. Cryptocurrencies like Bitcoin have dominated the news headlines due to their remarkable performance over the years. Despite being highly volatile, Bitcoin has continued to increase its value. Currently, entrepreneurs and…
Sport
Port Harcourt rolls out red carpet as kings celebrate polo’s golden jubilee
7 hours ago
When it comes to style, there is no beating the Niger Delta. Aside from the serene environment and rich sea food the people guarantee their visitors, nobody visits a Niger Delta event without having a story to tell. And so it was at the Port Harcourt Golden Jubilee Polo tournament, which attracted teams from across…

World
NATO delivers written 'proposals' to Russia
5 hours ago
NATO on Wednesday said it had delivered a set of written "proposals" to Russia, after Moscow issued a raft of demands to roll back US influence in eastern Europe.
APO Press Releases
Ethiopia FM condemns Houthi terrorist attack, affirms solidarity with UAE in phone call with H.H. Sheikh Abdullah bin Zayed
5 hours ago
Download logoEthiopia has strongly condemned the terrorist attack, which was carried out by the terrorist Houthi militia on 17th January and targeted civil areas and facilities in the UAE. This came during a phone call between H.H. Sheikh Abdullah bin Zayed Al Nahyan, Minister of Foreign Affairs and International Cooperation, and Demeke Mekonnen, Deputy Prime…
APO Press Releases
Eritrea: Financial support to families of martyrs
5 hours ago
Download logoYouth workers organization and trainees of Nakfa Social Science Training Center contributed 93 thousand Nakfa in support of 33 families of martyrs in their areas. Accordingly, 12 families of martyrs in 12 administrative areas in Ghinda sub-zone were extended with 6 thousand Nakfa each while 21 families of martyrs in Nakfa sub-zone were provided…

APO Press Releases
Learning Loss must be Recovered to Avoid Long-term Damage to Children's Wellbeing and Productivity, New Report says
5 hours ago
School closures have caused large and persistent damage to children’s learning and wellbeing, the cost of which will be felt for decades to come, according to a new report launched today by the Global Education Evidence Advisory Panel (GEEAP), co-hosted by the UK’s Foreign, Commonwealth & Development Office, UNICEF Office of Research-Innocenti, and the World Bank. Prioritizing Learning…
APO Press Releases
Riche Lieu Prison detainees refurbish Bambous Virieux Fisheries Post
5 hours ago
Download logoThe Minister of Blue Economy, Marine Resources, Fisheries and Shipping, Mr Sudheer Maudhoo, effected, this afternoon, a site visit at the Bambous Virieux Fisheries Post. The aim of the visit was to take stock of embellishment and electrical works, among others, which were undertaken by detainees of Riche Lieu Prison at the Fisheries Post.…