By APO Group
Share on Facebook Share on Twitter Share on WhatsApp Share on Telegram
An estimated 1.3 million people are in urgent need of humanitarian assistance and protection in Mozambique's three northern provinces - Cabo Delgado, Niassa and Nampula - due to the conflict in Cabo Delgado. About 670,000 people were internally displaced in northern Mozambique by the end of 2020, including at least 580,000 people displaced from their… 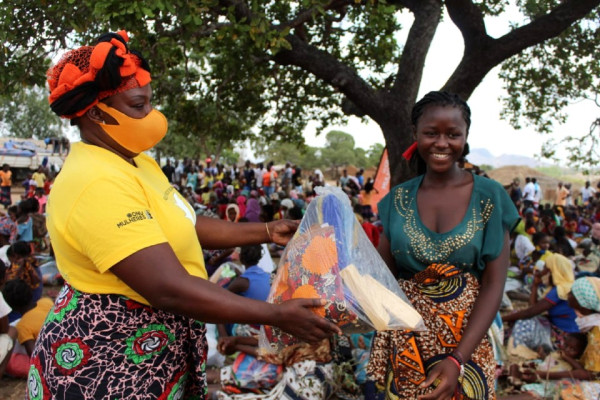 An estimated 1.3 million people are in urgent need of humanitarian assistance and protection in Mozambique's three northern provinces – Cabo Delgado, Niassa and Nampula – due to the conflict in Cabo Delgado. About 670,000 people were internally displaced in northern Mozambique by the end of 2020, including at least 580,000 people displaced from their homes in 2020 alone. Women and girls were the majority of the displaced and were in urgent need of dignity kits to help minimize their transition process until a final destination is identified or their places of origin are safe to return to.

In response, more than 500 women and adolescent girls affected by the armed conflict in Cabo Delgado benefited from dignity kits in the resettlement centres of Cua and Chiure-Velho, an initiative implemented by UN Women with the Provincial Services for Social Affairs, supported by Direct Relief in efforts to put women at the center of humanitarian response.

The kits are composed of personal hygiene items necessary for women and girls as they continue in resettlement centers after being forced to flee their places of origin in search of safety.

This support follows the first solidarity mission, headed by UN Women Head of Agency Marie Laetitia, targeting 1000 women and girls from the transition center located in the capital city of Pemba, where partners including the Provincial Director of Social Services and Gender Advisor, the District Local Administrator, the Provincial Delegate of National Institute for Disaster Management and implementing partner Promura allocated items to alleviate the impact on women and girls.

The initiatives are part of ongoing efforts from UN Women in Mozambique to provide a consolidated response to the impact of armed conflict in the province which effects women and girls to a greater degree. These efforts include a call for USD 10 million needed for survivors.

While the agency mobilizes resources under Women, Peace and Security, UN Women is working closely with the Agency for Integrated Development of the northern region currently building dignified houses in Ancuabe district near one of the resettlement centers. Women who benefit from the houses are trained and participate in the construction process.

Distributed by APO Group on behalf of UN Women.

Nigeria
Don’t be political spectators, let your numbers count- Bello
3 hours ago
Yahaya Bello of Kogi has called on Nigerian youths to make their numbers count and not be political spectators in the country’s 2023 general elections and democratic processes.
World
IMF to grant Zambia financial relief in return for ‘bold’ reforms
5 hours ago
The International Monetary Fund (IMF) has announced plans to give financial relief to Zambia in return for economic reforms.
Sport
Dortmund 'praying' Haaland stays next season, says Riedle
7 hours ago
Borussia Dortmund legend Karl-Heinz Riedle says the Bundesliga club is 'praying' star striker Erling Haaland stays next season as they fend off interest from the Premier League.
World
At least 17 suspected Omicron cases after Oslo party
7 hours ago
At least 17 people who caught Covid-19 after a Christmas party with more than 100 guests in Oslo last week are suspected of having the Omicron variant, officials said Friday.
Nigeria
Procurements, postings at Refugee Commission in line with procurement act - NCFRMI
7 hours ago
The National Commission for Refugees, Migrants and Internally Displaced Persons (NCFRMI) says media attack would not distract the management. The establishment is under the Ministry Humanitarian Affairs, Disaster Management and Social Development. Sampson Ikemitang, Head of Public Relations, in a statement, insists procurement processes and approvals are in line with the Public Procurement Act, 2007.…

APO Press Releases
Uganda ready to implement new secondary curriculum
5 hours ago
The Prime Minister and Leader of Government Business in Parliament, Robinah Nabbanja, has informed legislators that Uganda's education sector is on course in rolling out the new lower secondary school curriculum when schools reopen in January 2022. "Government has recruited and deployed 1,598 staff in the newly completed seed secondary schools under the Uganda Inter-governmental…
APO Press Releases
Sweden and UN Agencies launch multi-year project to strengthen food and nutrition security in Mali
5 hours ago
Download logoThe Government of Sweden, the Food and Agriculture Organization of the United Nations (FAO), the United Nations Children’s Fund (UNICEF), and the World Food Programme (WFP) have signed a four-year programme to strengthen the resilience of vulnerable communities affected by food insecurity, malnutrition, and the effects of climate change in the Malian regions of…
APO Press Releases
Tigray conflict: UN experts call for urgent action to stop violence against women
5 hours ago
Download logoUN human rights experts* today expressed grave concern about the widespread sexual and gender-based violence committed against women and girls in the Tigray, Amhara and Afar regions of Ethiopia by parties to the conflict. They reiterated the recommendations by the Ethiopian Human Rights Commission-Office of the High Commissioner for Human Rights Joint Investigation report, for…
APO Press Releases
IMF Staff Reaches Staff-Level Agreement on an Extended Credit Facility Arrangement with Zambia
5 hours ago
Download logoThe IMF team reached a staff-level agreement with the Zambian authorities on a new arrangement under the Extended Credit Facility (ECF) for 2022-2025 to help restore macroeconomic stability and provide the foundation for an inclusive economic recovery. An International Monetary Fund (IMF) team led by Allison Holland, Mission Chief for Zambia, conducted a virtual…