By APO Group
Share on Facebook Share on Twitter Share on WhatsApp Share on Telegram
The opening day of African Energy Week 2021 featured a panel discussion focused on the legal and technical aspects of oil and gas exploration during a Country Spotlight on Namibia. Moderated by Jo Kromber, the Foreign News Editor for Xinhua News Agency, the discussion featured a panel including Namibia’s Minister of Energy, Hon. Tom Alweendo;… 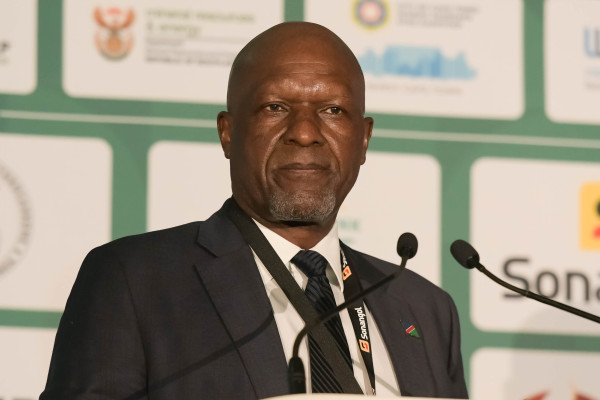 The opening day of African Energy Week 2021 featured a panel discussion focused on the legal and technical aspects of oil and gas exploration during a Country Spotlight on Namibia. Moderated by Jo Kromber, the Foreign News Editor for Xinhua News Agency, the discussion featured a panel including Namibia’s Minister of Energy, Hon. Tom Alweendo; CEO for Canadian oil and gas company, Reconnaisance Africa (ReconAfrica), Scott Evans, and the Managing Director for The National Petroleum Corporation of Namibia (Namcor); among others.

The Namibian Ministry of Mines & Energy has noted the promotion of investment and growth, and energy supply security as primary goals in creating a policy and legal framework to attract investment into the sector, a key focus for maintaining cooperation and competition in the fair distribution of upstream sector activities.

The Government of the Republic of Namibia formally invited international and regional oil and gas companies to submit applications for licenses for petroleum exploration in the southern-African country. Legislative frameworks and policies that govern the Namibian upstream oil and gas sectors are well-developed and designed specifically for implementation for the international oil industry. Standard international practices, license application fees, annual license area rental charges, as well as annual training fees are main elements set out in the fiscal framework legislation for investment in the country’s oil and gas sector.

Namcor, which is responsible for assisting the Ministry with petroleum exploration and production policy administration, is tasked with the acquisition of data, the promotion of Namibia’s petroleum potential, and creating value to all stakeholders.

“Africa is easily the most underexplored continent in the world,” ReconAfrica CEO, Scott Evans, who added, “I think there are a lot of opportunities that haven’t had significant attention.”

With regards to how Namibia’s fiscal deficit and public debt levels will improve with the abundance of oil and gas resources, Hon. Tom Alweendo, the Minister of Energy for Namibia, stated that, “We are on the cusp of transformative activities that can transform the country,” and added that the country has fruitful oil and gas prospects with the potential to deliver equity to the country. During the panel discussion, he noted that the current economic projections do not take into account future discoveries made by ReconAfrica.

Taking place on the 9 November, the country spotlight established the southern-African country on the international oil and gas stage. Following favorable fiscal incentives, Namibia has positioned itself in the competitive petroleum exploration scene and drawn interest from oil majors including Tullow, TotalEnergies, GALP, Shell, ONGC, and ExxonMobil. Namcor has taken a center position in shaping the country’s prospects, commissioning a 10% interest in multiple international companies operating in Namibia.

Speaking on opportunities in the country, Shakwa Nyambe, Director for the Association of International Petroleum Negotiators indicated the necessity to develop policies that create an enabling environment to attract investors. “Namibia’s energy approach, which is that of an energy mix, promotes all forms of energy. The same national policy promotes the exploration of oil and gas and also promotes the traction of investors,” he stated when questioned on the exploration opportunities that exist for Namibia’s natural resources.

On the measures and adjustments for rent, royalties, and taxes for exploration companies, Immanuel Mulunga, Managing Director for Namcor stated, “The fiscal regime in Namibia is quite simple,” adding that, “The government will want to increase taxes in a progressive, competitive, and transparent manner.”

Committed to a just energy transition, ReconAfrica has completed the drilling operationg for 16 solar-powered water wells for local communities in the Kavango east and Kavango west regions, aiming to drill six more in the near future. The company has also indicated that it has employed over 300 Namibian residents for its operations in the country.

“What’s really changed over the past few years is the energy transition.” Concluded Paul Eardley, Head of Oil & Gas for Standard Bank, “There are a couple of unique aspects around the African development story. We continue to support and encourage the development policies that take climate into consideration. It is clear that development returns [in Namibia] are unmatched anywhere else in the world.”

World
Iran negotiator arrives in Vienna for key nuclear talks
6 mins ago
Iran's chief nuclear negotiator Ali Bagheri arrived Saturday in Vienna ahead of talks aimed at reviving the 2015 deal with world powers
Sport
Arsenal brush aside Newcastle as Howe suffers first defeat
15 mins ago
Arsenal got back on track with a 2-0 win over Newcastle on Saturday as Eddie Howe suffered his first defeat as manager of the Premier League strugglers.
World
Countries convene for pandemic treaty talks
25 mins ago
World nations gather Monday to thrash out whether to pursue a pandemic treaty setting out how to handle the next crisis -- which experts
Nigeria
Oyo government suspends three over alleged sexual harassment in school
38 mins ago
The Oyo State Government has suspended three staff members of the Oyo State Basic School, Ogbomoso, over alleged sexual harassment.
Nigeria
Emefiele says eNaira downloads almost 600,000 in less than four weeks
43 mins ago
Mr Godwin Emefiele, Governor, Central Bank of Nigeria (CBN), says that in less than four weeks, the eNaira app had witnessed

Sport
Arsenal brush aside Newcastle as Howe suffers first defeat
15 mins ago
Arsenal got back on track with a 2-0 win over Newcastle on Saturday as Eddie Howe suffered his first defeat as manager of the Premier League strugglers.