By APO Group
Share on Facebook Share on Twitter Share on WhatsApp Share on Telegram
Paul Empole Efambe, the new Permanent Representative of the Democratic Republic of the Congo to the United Nations Office at Geneva, today presented his credentials to Tatiana Valovaya, Director-General of the United Nations Office at Geneva. Prior to his appointment to Geneva, Mr. Empole Efambe served at the Permanent Mission of the Democratic Republic of… 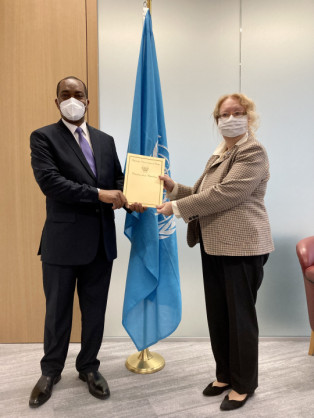 Mr. Empole Efambe held various posts at the Ministry of Foreign Affairs, including Chief of Office covering the Economic and Social Council and sustainable development at the Direction of International Organizations; Deputy Secretary of the Permanent Consultative Committee of the United Nations for security questions in Central Africa; and Secretary of the National Committee to fight against the illicit sale of small arms and light weapons and antipersonnel mines. He was a professional intern at the Ministry of Foreign Affairs from 1999 to 2001 and then became a career diplomat.

Mr. Empole Efambe has a diploma of higher studies in French literature and civilization, Faculty of Literature and Human Sciences, University of Kinshasa, Democratic Republic of the Congo (2010); a bachelor's degree in French language and literature from the same University (1999); and a bachelor’s degree in applied pedagogy from the National Pedagogical University, Democratic Republic of the Congo (1995). He was born on 30 September 1964 and is married.

Distributed by APO Group on behalf of United Nations (UN).

World
Covid cases 'drop significantly' in Africa: WHO
5 mins ago
Cases of Covid have plummeted in Africa and deaths are declining for the first time since the Omicron-dominated fourth wave of the virus reached its peak, the UN said Thursday. Describing the 56-day flareup as Africa's "shortest upsurge yet," the World Health Organization's African regional office said newly reported cases fell by 20 percent in…

World
Covid cases 'drop significantly' in Africa: WHO
10 mins ago
Cases of Covid have plummeted in Africa and deaths are declining for the first time since the Omicron-dominated fourth wave of the virus reached its peak, the UN said Thursday.

World
Probe finds ex-pope Benedict failed to act in German abuse cases
3 hours ago
Former pope Benedict XVI knowingly failed to take action to stop four priests accused of child sex abuse in Munich, according to the findings of a damning independent report presented on Thursday. The ex-pontiff -- who was the archbishop of Munich and Freising from 1977 to 1982 -- has "strictly" denied any responsibility, said lawyer…

Guardian Life
7 Classic Nollywood Movies To Binge Watch This Weekend
3 hours ago
With the weekend only a few days away, now's a better time than ever to get your watch list in order. This weekend, take a fun and worthwhile trip down memory lane with old school Nollywood films that bring to mind the good times.  These are 7 classic Nollywood movies you should binge-watch this weekend,…