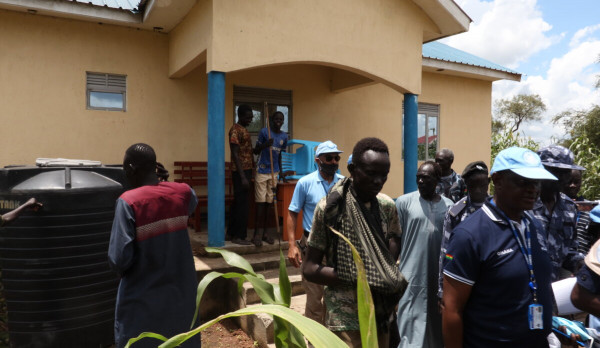 “A functional police station in Anyidi means that even we, as women, will have our needs and concerns addressed. I am happy, very happy about this,” said Rieng Garang and Deborah Nyieng, standing in the shade while watching the facility being handed over to their community.

They are hoping that a proper office for law-enforcement agents in Anyidi Payam (administrative division) in Bor South County will bring increased security and thus assist the the town’s development as a growing trade centre, with many cattle traders from nearby Pibor frequently bringing their goods to the strategically placed market.

The new police situation has been funded by the United Nations Mission in South Sudan, as one of its Quick Impact Projects, which are implemented in locations where the needs are deemed the greatest.

“We will come here frequently to assess how things are going. We encourage you to analyze your training needs so that we can help you develop further,” said Bernard Norgah, a UN police officer serving with the peacekeeping mission.

The investment of 50,000 dollars, the cost of the police station, in Anyidi was made with one eye on possible disputes arising from the increasing trade in town, but for Rieng Garang and other female residents the main benefit will be another.

“Now we will have a place to report cases of rape and abuse to the police, and that means a lot to us,” she said.

The elderly in Anyidi dare dream of a return to the town’s former days as home to an estimated 25,000 people.

“The repeated outbreaks of conflict, not least in 2013 and 2016, meant that most people fled from town. Now I believe we are about a thousand left,” said Mamer Akuot, a senior citizen. “The presence of a police station gives us a sense of safety and may encourage people to return and bring the community back to some normalcy.”

“Our aim is to guarantee some level of security here, and with that we would like to see former residents come back home to rebuild their lives,” he said.