By APO Group
Share on Facebook Share on Twitter Share on WhatsApp Share on Telegram
Africa is on the precipice of an energy sector revolution, with significant resources, progressive regulations, and industry advancing policies and initiatives driving growth across the oil, gas, and renewable energy sectors. Focused on driving investment and development in African energy projects, African Energy Week (AEW) 2021 is proud to host Ministers from across the African… 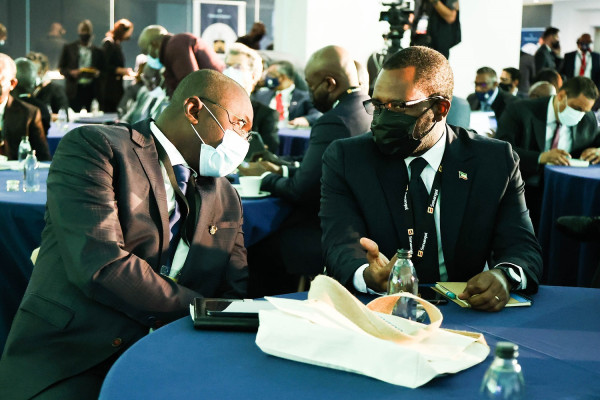 Africa is on the precipice of an energy sector revolution, with significant resources, progressive regulations, and industry advancing policies and initiatives driving growth across the oil, gas, and renewable energy sectors. Focused on driving investment and development in African energy projects, African Energy Week (AEW) 2021 is proud to host Ministers from across the African continent. Representing both mature and emerging energy sectors, the Ministers introduced key topics to be addressed at AEW 2021, promoting the role of oil and gas, and making a strong case for international investment in Africa.

During the opening remarks, H.E. Adam emphasized that the western imposed energy transition will hold significant challenges for Africa’s development. He noted that, accordingly, the continent is urged to develop its own strategies to reduce emissions – establishing innovative financing solutions to drive exploration and production.

“Africa has been described as the last oil and gas frontier in the world. Many countries have discovered hydrocarbons showing great potential for our economies. There is no doubt that energy transition will be disruptive to the economies of Africa and producers of oil. The effects of the transition ranging from revenue losses to underinvestment in hydrocarbon, what I call the transition curse, will ensure that Africa is left behind the rest of the world. African natural gas must be given the status as transition fuel for a longer period to allow gas reserves to be used when replacing a more carbon intensive fuel such as coal. The transition should not be divorced from the necessity of addressing energy poverty,” stated H.E. Adam.

“We have come together at a decisive moment. There has never been a better time for Africa to chart its own path. Our continent produces 6% of the world’s natural gas and 9% of the world’s oil. At the same time, we account for just 3% of global emissions. Thus, it is safe to say that Africa is the last energy frontier. Such vast potential cannot go unexploited. We need a just transition. we have an obligation to future generations to exploit our resources and use the proceeds to improve access to healthcare, food, and fight energy poverty,” stated H.E. Mahamadou.

“Listening to all the speakers, none of us is against renewable energy. But we are all saying, and continue to repeat ourselves, that it must be inclusive, equitable, and we must all sit on the table and agree. South Sudan’s budget depends on oil by 98%. Yes, we need to transition and are committed to it. But if the basic reason is that it affects human life, those of us that cannot produce what we have will suffer, making it even more important that it is a process and is inclusive. For the first time ever, South Sudan will hold its first oil license block featuring five open blocks in June 2021, inviting investors to present and explore. And yes, I am promoting it and inviting people to bid. Of the two blocks that we have offered, they have been offered to Africans,” stated Hon. Chol.

“We highly appreciate the return of investors in the country. Libya has vast resources in minerals. Our country is stabilizing steadily, and we are proud that we are coming out of the difficult times we have gone through. The government of national unity has encouraged foreign investment. The last few years, there have been awards of contracts to help build electricity, roads, and infrastructure. We also have a shortage in the production of fuel in terms of the refining and petrochemical industry and are willing to see foreign investment in this side,” stated H.E. Oun.

“The time has come for Africa to redefine its E&P priorities. It is now or never. The issues surrounding energy poverty, climate change and development are not mutually exclusive. The approaches to dealing with them should not be separated but facilitated in a cooperative manner. Climate change is of great concern to everyone as of equal importance is the issue of energy poverty. The battle is not between climate change and energy poverty, or between fossil fuel and renewables, or between energy rich and energy poor. It is about creating a win-win environment and putting a human face into the actions and proposals that are being put forward. An unfair world cannot be a peaceful world,” stated Dr Odulaja.

Additionally, with Africa’s position in global energy dialogue emphasized, panel participants promoted the role that AEW 2021 has and continues to play in Africa’s energy future.

“It is not uncommon for Africans to be invited to conferences on Africa, outside of the continent. That is why it is so important to be discussing issues faced in Africa on the African continent. AEW 2021 comes at a time where drastic action is required in order to accelerate energy developments and electrify Africa. Representing the first and only Africa-focused energy event to take place in Africa in 2021, AEW 2021 will serve as a catalyst that will help transform the African energy space, making energy poverty alleviation a reality by 2030. With national electricity plans being implemented across the continent, and the widespread redirecting towards renewable power generation alternatives, significant developments have emerged within the solar, wind, and hydroelectric industries,” stated H.E. Alweendo.

“So, why are we here? Because we care. We care to be able to represent our countries and discuss these important matters. We care for our people, people who have given us the responsibility to exploit resources. We care for our countries, countries that have not finished development. We care about our natural resources. We also care about our continent and our future. We also care about South Africa, as there is an unofficial secret that once a year, we come together to discuss the industry. I cannot go to Houston or Dubai and discuss problems about electricity because they will not understand. This is why Cape Town and South Africa are so important. We also care for our planet and climate change and also recognize that our continent is the least polluter,” stated H.E. Lima.

Meanwhile, Ministers brought attention to the significant potential of renewable energy in Africa. With global players pushing for the transition to clean energy sources, Africa’s renewable energy resources can be leveraged to drive socio-economic growth and address energy poverty.

“World-known economists have said that the next latest shift in the world economy will be Africa. How can we be the future and the future leader of the economy of the world while developing our continent without an engine? To require Africans to stop developing all different kinds of energy we have on the continent, it doesn’t make sense. We are talking about energy transition. People in Glasgow say that the solution, the only solution is renewable energy. Yet, the highest potential in the world is in Africa. If we talk about any kind of renewable energy, the most important potential is in Africa,” stated H.E. Itoua.

Nigeria
Pirates kidnap NSCDC operative, 4 oil workers in Bayelsa
10 mins ago
Suspected pirates have abducted an operative of the Nigeria Security and Civil Defense Corps (NSCDC) and four contract staff working at the Conoil field in Koluama 1 in Bayelsa.
AMA Press Releases
The Kerry Group’s acquisition of East Africa’s Afribon set to bring heathy and tasty food to consumers
43 mins ago
NAIROBI, Kenya, 6 December 2021- /African Media Agency (AMA) /- The Kerry Group has expanded its footprint in Africa following its acquisition of Rwanda-based Afribon. This transaction further enhances Kerry’s focus as a leading business to business ingredient solutions provider for the food, beverage and pharmaceutical markets.  Launched in 2012, Afribon is specialised in the…
Nigeria
Buhari urges auditors-general to stamp out corruption
44 mins ago
President Muhammadu Buhari has called on Auditors-General across the country to introduce strategies that will help stamp out corruption from the system.
Nigeria
Police arrest 5 rape suspects, woman with 90 rounds of ammunition in Borno
1 hour ago
The Borno Police Command on Monday said it arrested five suspected rapists and a woman in possession of 90 rounds of ammunition.
Travel and Places
Travelling This Holiday? Here Are Some Packing Tips For You!
1 hour ago
The holiday season is closer than ever, and people are getting ready to take some time off to cool off. All work and no play makes a dull and worn out you! If travelling is part of your cooling off for Detty December, preparing and packing for your trip is a delicate aspect to pay…

Nigeria
Pirates kidnap NSCDC operative, 4 oil workers in Bayelsa
10 mins ago
Suspected pirates have abducted an operative of the Nigeria Security and Civil Defense Corps (NSCDC) and four contract staff working at the Conoil field in Koluama 1 in Bayelsa.

AMA Press Releases
The Kerry Group’s acquisition of East Africa’s Afribon set to bring heathy and tasty food to consumers
43 mins ago
NAIROBI, Kenya, 6 December 2021- /African Media Agency (AMA) /- The Kerry Group has expanded its footprint in Africa following its acquisition of Rwanda-based Afribon. This transaction further enhances Kerry’s focus as a leading business to business ingredient solutions provider for the food, beverage and pharmaceutical markets.  Launched in 2012, Afribon is specialised in the…
APO Press Releases
Living in shadows: Disabled women speak at their first-ever focus group in Warrap
43 mins ago
Download logo“I often feel invisible,” revealed Angelina Ayer Akol, a disabled woman from Warrap during a focus group discussion. "When our community distributes material assistance, disabled people are always excluded. During past floods, I was displaced, sleeping on plastic sheets and constantly relocating but no one helped me. I was completely excluded, as if I didn’t…
APO Press Releases
Special Representative of President Xi Jinping of China Pays Courtesy Call on Sierra Leone's President Julius Maada Bio, Advances Cooperation
43 mins ago
Download logoSpecial Representative of President Xi Jinping of the People’s Republic of China, His Excellency Yang Jiechi, has led a high-level delegation to meet His Excellency President Dr Julius Maada Bio, advance cooperation and convey goodwill from Beijing. H.E. Yang, who is the Director of the Central Foreign Affairs Commission, also extended warm regards from…
APO Press Releases
First Lady Margaret Kenyatta Advocates For Alternative Rites Of Passage To Replace FGM
43 mins ago
Download logoFirst Lady Margaret Kenyatta has lobbied stakeholders and communities to support the adoption of alternative rites of passage that involves mentorship to replace female genital mutilation (FGM). “The proposal to take girls through a 15-day initiation programme comprising of sessions on mentorship into adulthood, healthy relationships, life skills training, basic home economics and the…

APO Press Releases
Interstate Conference on Upcoming Seasonal Cattle Migration Concludes in Western Bahr El Ghazal
43 mins ago
A three-day interstate conference brought together some 100 participants drawn across two states in South Sudan—Warrap and Western Bahr el Ghazal—to dialogue on a key issue: Preventing conflicts between herders and farmers during the upcoming cattle migration season. The main takeaway from the gathering was the need to deploy an integrated joint police force and…