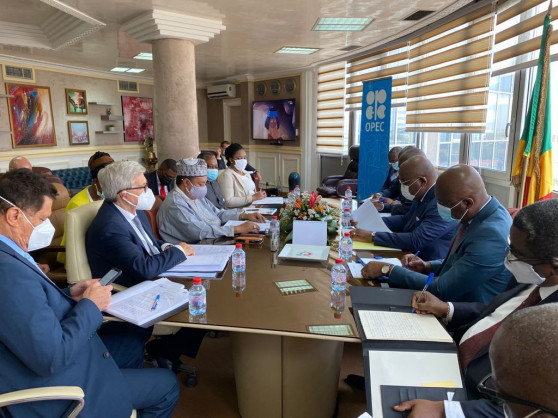 H.E. Mohammed Barkindo, Secretary General of the Organization of Petroleum Exporting Countries (OPEC) has urged African oil-producing countries to continue developing their energy sector activities and reassured that OPEC will continue to serve as a viable partner and “assist [them] in whatever way possible.”

Speaking during a meeting at the Republic of the Congo’s National Oil Company, Société nationale des pétroles du Congo (SNPC), as part of a historic three day OPEC and African Energy Chamber delegation to the country on Monday, he highlighted the role of oil and gas in the development of Africa’s energy industry, as well as global energy security. H.E. Barkindo further pointed out that while improvements in renewable energy technologies have been made, the oil and gas industry remains the primary road out of widespread energy and economic deprivation.

“OPEC categorially rejects the narrative that the energy transition is from hydrocarbons to renewables,” said H.E. Barkindo, adding that “all sources of energy are required today in order to meet the challenges of climate change and the future demand for energy.”

Given that the global population is said to increase by 1.7 billion people by 2045 with the majority coming from Africa, it remains crucial that countries like the Congo strengthen their energy industries to respond efficiently to current and future challenges. Congo’s efforts to boost its oil and gas sector, as well as SNCP’s activities have been praised by the Secretary General.

ECP (https://bit.ly/3sIWo8q) is live covering AEC’s and OPEC’s historic visit to the Republic of Congo as it launches it’s own initiatives to promote the country’s energy sector.

Groups urge Buhari to confirm Dikio’s appointment
1 day ago  Nigeria
Brown Skin Girl… And The Laurels Continue For Wizkid, Others
3 days ago  Music
New law to make Nigerians pay more for electricity underway
2 days ago  Nigeria
Watch: Wizkid And Wale Perform "Ojuelegba" Together On Stage
15 Sep  Music
Do You Know About The Spirituality Of Foods?
2 days ago  Guardian Life